THIS DAY IN HISTORY… AUGUST 29

The British warship was at anchor in Spithead harbor off the English Channel when it capsized, costing over 800 lives. After it was built in 1756, the Royal George was the largest ship in the British Navy, housing three decks of cannons. During the Revolutionary War, it had fought against an American fleet. On the day of its sinking, the ship held its entire complement of sailors. None were allowed ashore for fear of desertion. Many wives and families were visiting ,and an additional 200 unattached women were also aboard peddling their various wares. Work needed to be done on the hull so the cannons on the port side were rolled toward the starboard side to intentionally create a list. The ship’s carpenter, believing the list too severe, raised the alarm with the officer of the watch, Monin Hollingbery, who refused to take any action. He raised the alarm again, and again was ignored. The carpenter then went to the captain but it was too late and the ship capsized and sunk. The captain, trapped in his cabin, died, as did the carpenter. Hollingbery survived. An inquiry cited the ship’s structure to be faulty and exonerated Hollingbery.

That dude must have had friends in high places.

Elements of the Confederate Army, led by Generals “Stonewall” Jackson and James Longstreet, had approached within 35 miles of Washington, D.C. The Union Army, led by General John Pope, challenged them. The federal troops attacked, and as at the First Battle of Bull Run, were routed. Only some effective rearguard action kept D.C. from being captured. In the aftermath of the battle, President Lincoln replaced Pope as head of the army and banished him to Minnesota to deal with the cleanup of the Dakota War. Pope blamed the defeat on one of his generals who defied an order to attack. General John Porter believed he was facing Longstreet’s entire division and an attack would have been suicidal. Porter was court-martialed for his disobedience and dismissed from the army. In 1878, the case was reviewed and the conviction overturned. It was determined Porter was indeed facing a much larger force and his inaction had kept the Union Army from even greater defeat. Confederate General Longstreet was also criticized for his reluctance to move forward. An active pursuit of the defeated army might have resulted in Washington falling.

What’s most surprising about all of this is that we don’t have a military base named after Longstreet.

The company was created by Reed Hastings and Marc Randolph in Scotts Valley, California. The idea was to mail DVDs to those who did not live close to a DVD movie rental store. The company introduced streaming in 2007 and and became a producer in 2012. Netflix now has 193 million subscribers, and in 2016 produced 126 movies and TV series.

Remember when Blockbuster was a big deal?

White House Press Secretary. On March 30, 1981, during an assassination attempt on President Ronald Reagan, John Hinckley Jr. shot Brady above the left eye with a handgun. The bullet entered his brain causing permanent disability. Brady was wheelchair bound and suffered memory issues and slurred speech for the rest of his life. When he died in 2014, the cause of death was listed as a homicide. Throughout the rest of their lives Brady and his wife, Sarah, became advocates for gun control.

Some suggest we need more guns, not less, to prevent crimes like this. If Reagan and Brady had been packing that day, they could have gunned that Hinckley character down. Wait, you say they already were surrounded by Secret Service agents with guns. . . Well, I’ll let the NRA address that.

Olympic Gold Medalist. As a member of the U.S. team competing in the Mexico City Olympics of 1968, Beamon not only broke but shattered the world’s long jump record. When a new record was set in the long jump it would only be by inches, or a fraction of an inch. In Mexico City Beamon jumped twenty-nine feet and two and a half inches and broke the old record by an amazing one foot and ten and a half inches. Beamon never came close to that mark again and the record stood for 28 years. Detractors claimed Mexico City’s altitude and thin air as well as a tailwind aided him. But his competitors had that same thin air and wind and none of them exceeded their normal length in jumps that day. Beamon had barely made the Olympic team. He was down to his last jump in the qualifying round before succeeding. On his record jump his feet were an amazing six feet above ground as he flew through the air.

Beamon lost his mother when he was an infant and for a while was a trouble-maker in a school he called “a jungle.” He pulled himself away from a criminal lifestyle through athletics, first basketball and then track. After he quit competing in track he held a number of jobs promoting youth athletics.

I remember hearing about that event and being astounded. For one moment in time everything must have come together for him in a way it never had before nor ever would again.

Basketball player. George played eleven years in the NBA and won three championships with the Los Angeles Lakers. He defied odds by making the leap from a small Division III school, Augsburg College in Minneapolis, to the professional ranks. He still is the only Division III player to ever be drafted in the first round of the NBA. After he retired from basketball he returned to his home area of north Minneapolis where he started Building Blocks, a non-profit dedicated to fighting poverty by building affordable housing and creating business opportunities.

I worked for a non-profit in Minneapolis that created affordable housing. I had retired by the time George started his but maybe some day the two organizational paths will meet.

* Long Jump (stock photo image) – Photo by Raj Shah on Unsplash – Montclair State University, Montclair, United States – “I wanted to get a different angle of George jumping, so I decided to have him jump over me this time! Would do it again in a heartbeat for such an awesome shot!” 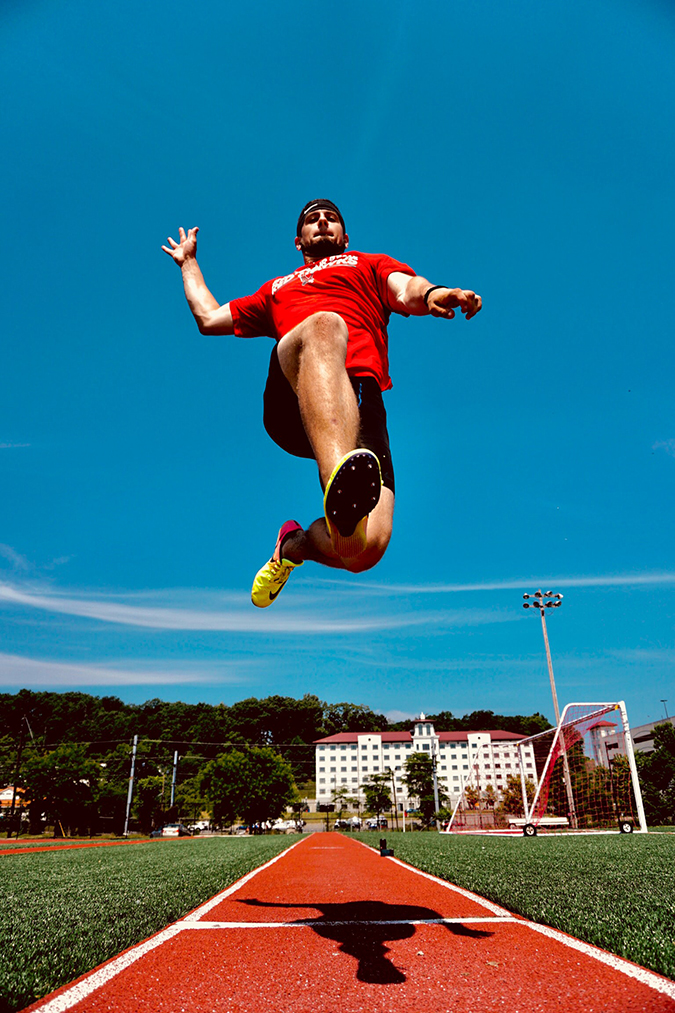