THIS DAY IN HISTORY… DECEMBER 13

Austro-Hungarian troops were battling the Italian army in the Alps. Besides the guns and cannons, the snow and cold were also a danger to the soldiers. The snowfall had been heavy that winter and in some places it was forty feet deep. Both sides were battling high in the mountains, using explosives in drilling tunnels to bolster their defenses. The snow-mass was loosened and a series of avalanches occurred. In one instance a barracks housing 300 Austrian soldiers was wiped away. By the time the avalanches were over it is estimated 10,000 soldiers from both sides were buried.

I suspect none of them were the masterminds who had decided drilling tunnels with explosives into snow-capped mountains was a good idea.

Known as the Rape of Nanking in the West. The Chinese city fell to the Japanese Army on December 13th and almost immediately the atrocities began. Murder, rape and torture would continue for six weeks. What started off as executions of Chinese soldiers soon spread to the whole of the civilian population. It was systematic and brutal and the actual death toll is unknown, somewhere in the range of 100,000 to 300,000. The Japanese government has acknowledged that some civilian deaths occurred but they put the number at several hundred.

Right. Unlike Germany, Japan has been reluctant to accept responsibility for the war crimes it committed during WWII.

If one of your problems in life is that you sleep too well at night, and you need to torment your mind with scenes of man’s inhumanity toward fellow man, read the “Rape of Nanking” by Iris Chang. That should keep you awake.

The 22-year-old rock and roll star was surprised at the scandal caused by him marrying a 13-year-old girl who also happened to be his third cousin. That kind of union was not uncommon in his home area. The fact that she was his third wife and he wasn’t divorced from his second didn’t earn him any points either. The marriage and resulting bad press was devastating to his career. At the time his popularity nearly rivaled that of Elvis Presley. Previously making $10,000 a night for a performance, his fee dropped to $250 a night. Lewis crossed over to country in the 1960s and his music career continued, but never at the heights it had been before his marriage. Myra was the third of Lewis’s seven wives. They had two children, one of whom died as a child and the other, Phoebe, lives with him and is his manager.

I saw a picture of his thirteen-year-old bride and I understood his desire, being quite smitten myself. But then I was fourteen at the time.

First Lady. She came from a wealthy family, was well educated, and had many suitors as a young woman. Among them were Abraham Lincoln and his political rival, Stephen Douglas. She chose the future president who was ten years her senior. She had four children, all boys, only one of whom outlived her. Despite, or maybe because of her high position, her adult life was troubled. She suffered from depression, migraines, and was perhaps bi-polar. Her behavior in public could be erratic and there was gossip about her. She did visit wounded Union soldiers in hospitals in Washington, D.C., and wrote personal letters to the families of those who died. Mary Lincoln lost one son to typhoid fever while in the White House and was at her husband’s side when he was shot. Her mental state was unstable for the rest of her life. In later life her one remaining son, Robert, had her institutionalized for a time, causing them to be estranged. Mary Lincoln was living with her sister in Springfield, Illinois, when she died in 1882.

I’ve read so many negative things regarding her that it was nice seeing the bit about her kindness toward wounded soldiers and and their families.

Poet and writer. Patchen’s poetry pushed boundaries and some called it “jazz poetry.” Although he had fervent followers, his work never gained widespread success. He was a pacifist and his anti-war stance, even against WWII, may have cost him. Among his peers and supporters were Henry Miller and E.E. Cummings. He also was an influence on the Beat Generation poets such as Allen Ginsburg and Lawrence Ferlinghetti. After they became famous however he soured on them because of their drug use and need for fame. Patchen suffered much of his life from a back injury and was eventually incapacitated by it. He died in Palo Alto, California in 1972.

I’ve read works by his peers and those he influenced, but not him. The list just keeps growing because of this blog.

Jewish resistance fighter. A Polish Jew, Zuckerman was one of the first to understand and fight against Nazi Germany’s evil plan. He helped in the Warsaw Ghetto Uprising by smuggling in weapons through the sewer system to the beleaguered fighters there. Utilizing that same sewer system he led out the few Jewish fighters who survived that fight. For the rest of the war he continued to conduct an underground resistance against the Nazi occupiers. After the war he assisted the refugee movement of displaced Jews to Palestine, where he also settled with his wife. Zuckerman was a witness at the trial of Nazi war criminal Adolph Eichmann. His war experiences troubled him greatly and this is a quote of his from Britannica.com: “If you could lick my heart, it would poison you.”

Heroes bear the burden of being a hero.

* Lead-In Image (Mary Todd Lincoln) – Everett Historical / Shutterstock.com – “Mary Todd Lincoln (1818-1882), wife of Abraham Lincoln, in a ball gown and flowers in her hair. She was both admired and criticized for her stylish extravagance.” 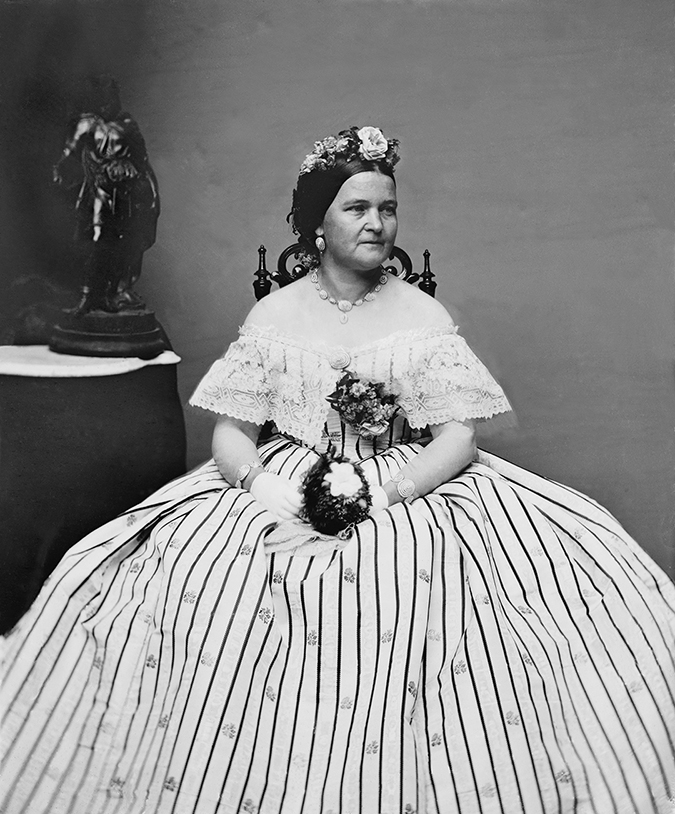