THIS DAY IN HISTORY… DECEMBER 17

Holt was the prime minister of Australia. With some friends and two bodyguards, Holt left Melbourne and went to a beach at Portsea, Victoria. The sea swell was high that day and most of the party elected to stay on shore.  One other went in, reported a strong undertow, and immediately came out. Holt, however, began swimming and soon the rip tide was dragging him out to sea. And that was the last he was ever seen. Despite a weeks long search, no body was found and Holt was presumed dead. Speculation as to what happened included heart attack, his overestimation of his own swimming capabilities, shark attack, and even suicide given that his political fortunes were waning, due to Australia’s involvement in Vietnam in support of America. Being that no body was ever found there were some wild theories also, like he was a defector and had swam to a Chinese submarine, or that he had faked his death to be with a lover. Hold was fifty-nine when he disappeared in the surf of the Australian beach.

A little over fifteen years later I was in Australia touring the continent. I traveled by bus: comfortable, long distance buses. I was in a smallish city in tropical northern Australia where I was staying in a hostel. The hostel was just beyond the outskirts of the city, about five miles from the downtown area. I was preparing for the final leg of my trip, a bus down to Sydney to catch a plane to New Zealand. Departure was early in the morning, too early for the city buses to be running so I’d have to take a cab to the bus station. The night before departure I went to a downtown phone booth to call a cab company to arrange the next morning’s pickup. The dispatcher answered and I was about a half dozen words into my request when the voice on the other end exploded.

“A bloody Yank, I’ll be goddamned! Where the hell are you, Yank?”

Not sure what was going on I looked at a street sign and told him where I was.

“Hang on, Yank, have a cab thee in a few minutes.”

“But I don’t need a cab tonight—-“ I said before I realized I was talking to dead air. This was weird. But of course I had to wait to see what was going to happen. A cab pulled up and a window rolled down.

As I rode in the cab going who knows where, with no explanation given other than Byron has a coldie waiting for me, I did have to wonder about myself. What kind of sane person would hop into a cab for no reason and an unknown destination? I also briefly wondered if it was some kind of elaborate and weird kidnapping scheme. The driver dropped me off at the taxi cab headquarters, which was a house on the beach. The house was on stilts and the dispatcher’s office was in the open air space underneath. The furnishings were a desk and radio console where the dispatching was done, a broken down couch, a few chairs and a refrigerator. Two shadeless light bulbs dangled from above. The dispatcher, Byron, was on the radio. He waved me in, opened the fridge, and gave me a beer. After he signed off we made introductions.

“Never pass up a chance to talk to a Yank,” he said as an explanation.

It took only a few minutes of conversation for me to surmise that Byron was nuts, whacked out of his skull crazy. But not in a frightening way. He reminded me of a friend I had had in college, Zeke. Slightly on the edge when sober, Zeke became a stark raving lunatic when drunk. Not a mean drunk, it was just unpredictable and amazing the directions his mind, actions, or mouth might take him, more than likely leaving a stunned and offended populace in his wake. He could then just as easily turn around and charm them. Merely being around Zeke was to embark on an adventure, and I had the feeling Byron was the same. I had learned from Zeke the best defense against his maniacal thrusts was not a sane parry, he fed off that. Agreement seemed to confuse and neutralize him. I used the same technique with Bryon.

Byron was half in the bag when I arrived and I had no doubt he’d finish the job before the night was over. He fed me beer and stories and I fed him stories in return. I’m a storyteller and so was he, and most storytellers delight in finding one another. We exchanged exaggerations, embellishments, and even some truths as we entertained one another and depleted the supply of beer in his fridge. His duties as dispatcher interrupted but it was a slow night, slow enough that drivers would stop in and have a few before going out for another fare. I wasn’t sure that was a good idea. Byron had also somehow gained a reputation as a lovelorn advisor. Young women, usually drunk young women, would call asking for advice about a problematic boyfriend. I hope none of them acted on his suggestions. One girl complained about her boyfriend having hit her and Byron became irate, wanting the name so he could set the bastard straight. The girl declined to divulge that information.

When it came to stories however, he had one that topped me. He had worked for the government, in security, a position similar to the Secret Service in the U.S. He had been one of the two bodyguards when Harry Holt disappeared on that fateful day in 1967. I had read about the incident, knew about the mystery of his disappearance, so I asked what he thought had happened.

“How the hell would I know, mate, wasn’t even on the beach. Was in a motel shagging a sheila at the time.” He looked around at his squalid surroundings and said, “When the boys found out, well, this is where me sorry ass landed.” He didn’t say it in a  rueful manner, just matter of factly, as if misfortune was merely a byproduct of life.

Byron became drunker, incoherent, but luckily one of his drivers came to my aid. He enticed Byron onto the couch, put a blanket over him as he passed out, and took me back to the hostel free of charge. I had reminded Byron several times of my need for a cab in the morning and he had reassured me, “No problem, mate.” Of course the next morning there was no cab. I called the cab company, the only one in town, and there was no answer. Desperate not to miss the bus to Sydney, I went to the road intent on hitchhiking. Except there were no cars that early in the morning. Then a milk delivery truck came puttering down the highway. The driver pulled over and I explained my dilemma to him. It was an old fashioned delivery truck, with open doors on the side and refrigeration in the back. “Love to help out, mate, and headed in that direction, but got me route to do first. Wanna pitch in?” So as the sun rose in the blue morning sky I spent the next 45 minutes delivering milk and other diary products to residential doorsteps in some small Australian city. And I made it to the bus station in time. Of all the precautions taken during the 2020 pandemic I think I miss traveling the most. 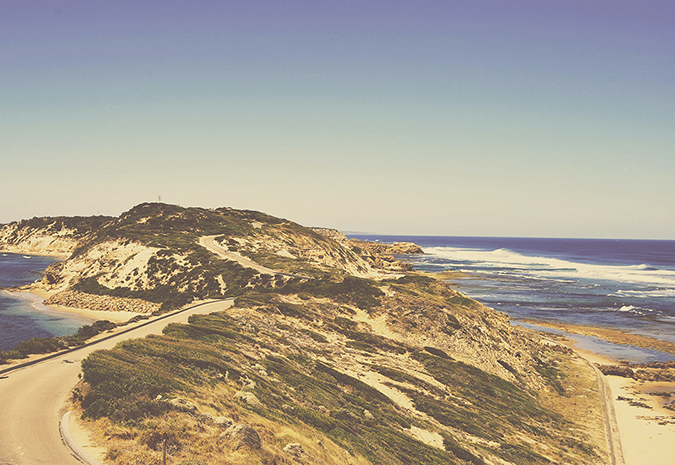