THIS DAY IN HISTORY… DECEMBER 19

The first edition of the novella written by Charles Dickens sold out in a week, by Christmas Eve. Despite thirteen more editions being released, Dickens made little money from the book, partly because of a corrupt publisher. However, in 1849 he embarked on public readings of the tale which proved to be popular and profitable. He gave readings every year from 1849 to 1870. “A Christmas Carol,” like much of his work, drew from the hardship and impoverishment of his own youth. The book has never been out of print, and the story has been told in many forms including film, stage, and even opera. Dickens began writing the novella in October 1843 and finished it in just two months.

Amazing, a classic was created in only two months.

This semi-professional hockey team, made up of prospectors from the Klondike Gold rush, challenged the reigning Stanley Cup champions, the Ottawa Silver Seven, to a series. For whatever reason the Silver Seven accepted the challenge. On December 19th the Nuggets began their trek to Ottawa. And indeed, it was a trek. The first leg was a nine-day, 330-mile struggle by foot, bicycle, and sled from Dawson City to Whitehorse. At night they stayed in North West Mounted Police cabins but still suffered some frostbite. They took a train from Whitehorse to Skagway and then a steamer to Seattle. After arriving in Seattle, they backpacked another three days to Vancouver where they boarded a train to Ottawa for a best of three game series.

This has to be the mother of all road trips.

Hockey was played differently back then. There were only seven players on a team and all seven were on the ice all the time. There were no substitutions and the goalie wore no protective equipment. The Nuggets arrived in Ottawa on January 11th, 1905, and exhausted from their long trip, were promptly routed by the champions in two games, 9-2 and 23-2. They did put up a spirited effort, however, evidenced by one of the Nuggets hitting an Ottawa player over the head with his stick, knocking him unconscious. Despite this, the local Ottawa paper lauded the sportsmanship of both teams.

Damn, I love history, of any kind.

239 men and boys were killed when gas was ignited in the Darr Mine in Pennsylvania. It is believed that the gas was set off by miners carrying open flame lamps. The mine disaster was the third in a week. The Naomi Mine disaster killed 361 in West Virginia on December 6th and 34 were killed in Fayette City, Pennsylvania on December 1st. An inquiry into the Darr Mine explosion absolved the mine owner of any blame.

Of course. Maybe it was viewed as helping the economy. You know, jobs, job, jobs. 239 new job openings were just created.

The charges were perjury before a grand jury and obstruction of justice. The perjury charge passed by a vote of 228-206 and obstruction by a 221-212 vote. The vote was not totally partisan in that several Democrats voted to impeach the Democrat president while some Republicans voted against.

I’m a liberal but I was for the impeachment of Clinton. To me the supposed crime was insignificant. However he lied, and tried to obstruct justice. The standards for a president should be higher, not lower than for the rest of us. The case facing us today is much more clear-cut in that we have a president who is as pure as the driven snow, has never told a falsehood in his entire life, nor has ever done anything underhanded to advance his own cause.

Country western singer. Born in the coal-mining town of Bolt, West Virginia, Dickens grew to the height of 4’11”, thereby gaining his self-applied nickname. He started performing professionally in his teens and a decade later he was part of the Grand Ole Opry. In the sixties Dickens was the first country star to go on an international tour, performing across the Far East and in Europe. His most popular song was ”May the Bird of Paradise Fly Up Your Nose.” Dickens was a member of the Grand Ole Opry until his death in 2016 at the age of 91.

I could find no evidence that he was related to Charles Dickens.

Singer and songwriter. Born in Texas, Ochs attended Ohio State University where he was influenced by the music of Woody Guthrie, Pete Seeger, and the Weavers. He dropped out of college, moved to Greenwich Village and played in coffee shops there. One of his contemporaries at the time was Bob Dylan. From Phil-Ochs.Blogspot.com: “In 1964, Bob Dylan commented in Broadside magazine that ‘I just can’t keep up with Phil. And he’s getting better and better and better.’” Ochs repaid Dylan by defending him in 1966 when Dylan went electric at the Newport Folk Festival. Ochs wrote and performed protest songs and was an early critic of the war in Vietnam. He, and his music, were in the thick of the protests in the 1960s. He played college campuses around the nation, was a friend of Jerry Rubin, supported Eugene McCarthy’s run for president, and also played music in Chicago parks during the tumultuous 1968 Democratic National Convention. The FBI had a file on him, followed him around on his concerts, and even analyzed the lyrics of his songs, trying to build a case against him. A writer of protest songs, Ochs lived his art too passionately. The events of the world depressed him severely, especially Chicago. He self-medicated with pills and alcohol. It all caught up to him and Phil Ochs committed suicide in 1976.

I don’t imagine there were any tears shed in the offices of the FBI.

* Lead-In Image (Christmas Carol art) – Dave Rheaume Artist / Shutterstock.com – “Scrooge and the Ghost of Christmas Present look in on the happy scene of the Cratchit family celebration. From Dickens’ A Christmas Carol.” 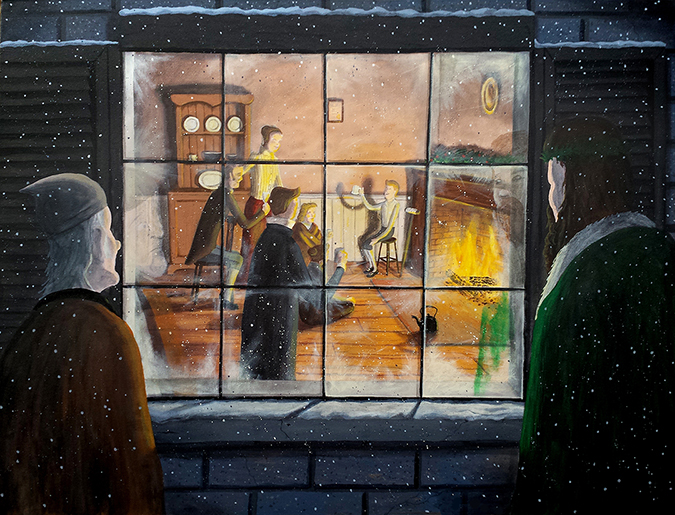