THIS DAY IN HISTORY… DECEMBER 4

Monroe was the fifth president of the U.S. and the last of the Founding Fathers to hold that position. He served from 1816 to 1825, a period of time that was known as the Era of Good Feelings. Thomas Jefferson said of him, “Monroe was so honest that if you turned his soul inside out there would not be a spot on it.” Signature events that occurred during his administration include the Louisiana Purchase, Monroe Doctrine, and Missouri Compromise. The Monroe Doctrine forbid any European meddling or colonization in the Americas. In return it promised no U.S. interference in European colonization elsewhere. The Missouri Compromise tried to maintain the delicate balance of power between slave and free states. It allowed Missouri into the Union as a slave state, Maine as a free state, and forbid any new slave states north of Missouri.

Time for a quiz. Who did Monroe defeat to become president? Answer at the end.

Arbuckle was one of the biggest stars in Hollywood during the silent film era. He stood accused of manslaughter and rape of an aspiring actress, Virginia Rappe, at a party in his honor at a San Francisco hotel. Arbuckle claimed he had a few drinks with the actress and others, when she became hysterical and began ripping at her clothes. He put her on the bed and it was at this point they were discovered. The case for the prosecution: Rappe was heard screaming and when Arbuckle came to the bedroom door he was in his pajamas and Rappe said, “he did this to me.” The story was sensationalized and sold a lot of newspapers. What wasn’t reported was that Rappe had a history of drinking a lot and disrobing at parties when she did, and suffered from abdominal pain exacerbated by drinking. An autopsy revealed no signs of physical violence, but she did have a chronic bladder condition. The trial ended in a hung jury with ten voting to acquit and two for guilty. A second trial also ended with a hung jury and Arbuckle was acquitted in a third trial. However his reputation was ruined, as was his Hollywood career.

His guilt or innocence was of secondary importance to an ambitious district attorney eager to make a political name for himself or the Hearst newspaper empire’s opportunity to increase profits.

Thousands of tons of soot combined with London’s usual fog to produce a thick, toxic brew that hung in the air for five days. Coal burning stoves in houses, factory emissions, automobiles, and diesel buses all contributed to the coining of a new word, smog. It was so thick that people used flashlights to guide them in the middle of the day and when they returned home they looked like they had been working in a coal mine. The smell of the yellowish air was described as one of rotten eggs. A strong wind finally blew in and helped clean the air. In the following years deaths from lung disease increased. An estimated eight to ten thousand people died as a result London’s Killer Fog.

In those less sophisticated times it was assumed the emissions from mankind’s inventions were responsible for the killer “smog.” Today, as we now know from more enlightened individuals who tell us climate change is a normal natural occurrence with mankind having no contribution, it stands to reason that London’s Killer Fog was nothing more than a weather inversion.

Native American leader. Crazy Horse was a Lakota war leader who fought the encroachment of whites in Indian territory. Crazy Horse participated in a number of battles including the Fetterman Fight where 80 US troopers were killed, the Battle of the Rosebud, and most famously, the Battle of Little Bighorn where Custer and all those under his immediate command were wiped out. He surrendered in 1877 and while in custody at Ft. Robinson, Nebraska, was bayoneted to death. Circumstances of his death remain uncertain. Official reports are that he put up resistance to being moved. But many believe there were orders to kill him and to do so at the slightest provocation. It took hours for Crazy Horse to die and he remained lying on the floor, refusing to die in a white man’s bed.

Maybe a new title should be added in describing him: Director of Homeland Security.

Inventor. At age fifteen, while ice skating in Farmington, Maine, Greenwood conceived the idea of ear muffs. He manufactured ear muffs for sixty years, providing jobs for those in his home town. There is still a Chester Greenwood Day in Farmington, celebrated on the first Saturday in December. The 2020 celebration was called off due to the COVID-19 pandemic.

When was the last time you’ve seen anyone wearing ear muffs?

Fighter pilot, Medal of Honor winner. Boyington first saw action with the Flying Tigers, a volunteer group fighting the Japanese in Burma. In 1942 he left them to rejoin the Marines and began flying combat missions in the South Pacific. By September, 1943 he was commander of the famous Black Sheep squadron. He acquired the nickname Pappy because he was a decade older than the rest of the pilots in the squadron. Boyington quickly became an ace and shot down a total of 28 enemy planes, 26 with the Marines and 2 with the Flying Tigers. In a dogfight on January 3rd, 1944, he was shot down, picked up by a Japanese submarine, and spent the rest of the war as a POW. Boyington was a heavy drinker and smoker and he admitted that his health actually improved while he was a POW because he had no access to his vices. “Baa Baa Black Sheep,” a TV series that ran for two seasons, was based on the exploits of Boyington and his squadron. He called it hogwash and Hollywood hokum. After the war he worked a variety of jobs, including refereeing professional wrestling matches. Boyington died of lung cancer at age 75.

Answer to quiz. D. Rufus King. Don’t feel bad if you missed it, I’ve never heard of him either. 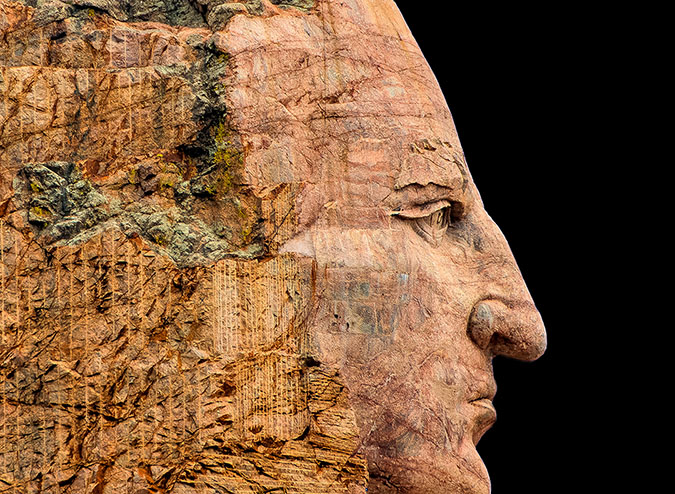