THIS DAY IN HISTORY… FEBRUARY 14 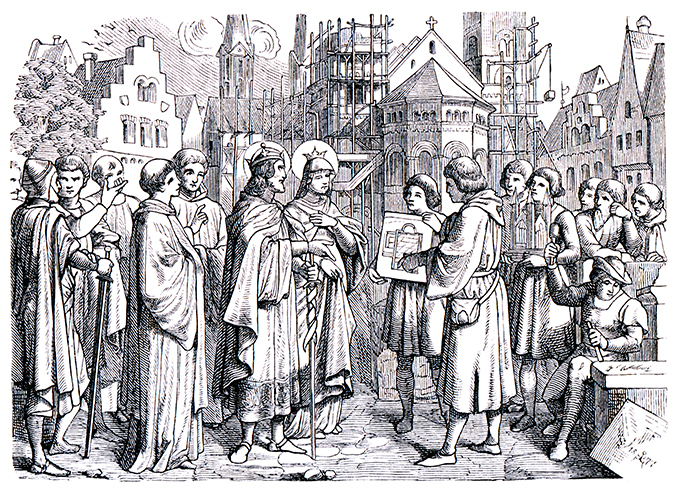 With the support of the Catholic Church Henry ruled over Germany and also Italy. He engaged in wars with Poland and also fought the Byzantines trying to occupy Italy. He endeared himself to the church by placing clergymen in positions of power rather than secular noblemen. In recognition for his devotion to the church Henry was canonized in 1147.

While this is all admirable, the most interesting fact I could find about Henry II is that his father was named Henry the Quarrelsome. As I have advocated before, I think our leaders should have more colorful monikers. Barack the Stable might have been appropriate, or Donald the…Unstable?

Partisan forces led by future Yugoslavia president, Josip Broz Tito, marched into Mostar, freeing it from the Nazis and Nazis collaborators. Yugoslavia was the only country during WWII that did not need occupying Allied forces to expel its Nazi invaders. It was also the only Eastern European communist country not part of the Soviet Bloc. The Yugoslavian partisans were considered the most effective anti-Nazi resistance fighters of WWII. There is a cemetery in Mostar where the remains of partisan fighters are buried. Since the Bosnian-Serbian-Croatian conflict of the early 1990s that split Yugoslavia apart, the cemetery has fallen into ruin. Competing Fascist and anti-Fascist graffiti mark the monuments. Evidence that wounds from the civil war, WWII, and earlier turmoil have still not healed.

A reminder to anyone who thinks war is a solution.

Adolph “Spike” Dubs was carjacked and kidnapped at gunpoint in Kabul by four men. They took him to a room at the upscale Kabul Hotel and holed up there. A Communist regime, influenced by Russia, ruled Afghanistan at the time. After a standoff of four hours, and against advice of the Americans, an Afghan force stormed the room. After a violent shootout two kidnappers and the Ambassador were dead. One kidnapper was captured and the fourth somehow escaped. The captured kidnapper was killed in custody before the Americans could question him, and another body turned up, supposedly the fourth kidnapper, to fill out the scorecard. Theories abound to what was the motive and who were the perpetrators. Suspects are the Afghan government itself wishing to remove American presence in the country, the KGB because they were the KGB, Muslim terrorists, or a case of mistaken identity and the terrorists were targeting the Russian Ambassador. Who was actually behind the abduction and killing remains a mystery to this day.

I think they should take a look at Hillary’s emails.

Jockey. Longden rode 6,032 winners in his career, including capturing the Triple Crown aboard Count Fleet in 1943. The 4’11” Longden held the record for wins until passed by Eddie Shoemaker, and then Laffit Pincay Jr. He is also the only person to have had won the Kentucky Derby as both a jockey and a trainer. Longden retired at age 59 having ridden 32,413 mounts in his career. At Santa Anita Park on March 12, 1966, with over 60,000 people roaring their approval, he won his last race. Longden died on his 96th birthday in 2003.

Being a jockey is the only profession where an ambulance follows you while you work. Thundering down the track at 35-40 mph aboard a 1,200 pound animal, they risk serious injury or death every time they ride. That’s why Longden’s achievements are so impressive. Over 32,000 times he put his well being on the line.

Labor leader. Hoffa was a dockworker in the thirties, became involved in the labor movement, and rose to prominence culminating with becoming president of the Teamsters. Suspected of being involved with organized crime, Hoffa continually sparred with the judicial system. Eventually he was convicted of bribery, jury tampering, and misusing union funds. After beginning his prison term, his sentence was commuted by President Nixon. In 1975 Hoffa disappeared, and his remains have never been found.

There is a general assumption that his passing from this realm was not a peaceful one.

Professional bicyclist. Evans, from Australia, won the 2011 Tour de France. A champion mountain bike rider, he switched to road racing in 2011. Along with Greg LeMond, he is only one of two non-Europeans to have officially won that race. Others, whose names shall not be mentioned, have won using performance-enhancing drugs.

I’m an avid bicyclist, but I doubt I share many similar experiences with the professionals. Case in point, I don’t go overboard in wearing spandex like many amateur riders. I hadn’t ridden a bike since I was a kid and was just getting back into it after a thirty years hiatus. My usual attire was a cotton t-shirt, floppy shorts or cut-offs, and sneakers. I was happily zipping along down East River Road in St. Paul. Up ahead was a construction site where new condos were being built. The workers were on break. A half dozen of them sat in a line in the shade of an oak tree eating lunch. Well, it seems there was a bee floating innocently along right in my path. The unanticipated encounter left us both in a state of panic as it was swept up into the gap between my leg and shorts. I, if not the bee, immediately understood what was happening. I coasted past the line of construction workers, legs spread wide, one hand under my shorts clawing desperately at my crotch. I can still see the puzzled expressions of those workers as they sat there with their sandwiches half raised to their open mouths. I have worn tight spandex shorts since that incident.