THIS DAY IN HISTORY… FEBRUARY 24

A Revolutionary War battle that took place in what is now Indiana. The British commander of the fort, Col. Hamilton, had gained the loyalty of the local Indian tribes and rewarded them for bringing in the scalps of colonists. He had become known to the Indians as “the Hair Buyer.” Clark wanted to end this practice as well as ensure that the Mississippi River would remain an open avenue for supplying the war effort. Using subterfuge, Clark tricked Hamilton into believing he had a superior force and Hamilton surrendered the fort. Side note, George Clark was the older brother of William Clark, of Lewis and Clark fame.

Johnson, a Democrat, was a senator from Tennessee. As the Civil War loomed he had argued against secession, and when Tennessee did secede, Johnson stayed in Washington and did not join the Confederacy. Abraham Lincoln rewarded him by selecting him to be his Vice President in the 1864 election. Assuming the presidency after Lincoln’s assassination, Johnson did not follow in his footsteps. He clashed repeatedly with Republicans over Reconstruction policies. He had no interest in compromise and was especially opposed to granting rights to freed slaves.

Johnson’s firing of Edwin Stanton, Secretary of War and a Lincoln appointee, initiated the impeachment proceedings. The vote in the House passed by 126 to 47. However, the measure failed to pass in the Senate by a single vote. Johnson was saved by seven Republicans who voted to acquit him. Republican Senator James Grimes of Iowa said, “I cannot agree to destroy the harmonious working of the Constitution, for the sake of getting rid of an Unacceptable President.”

Johnson’s philosophy was more singular. “This is a country for white men,” he had reportedly declared, “and as long as I am president, it shall be a government for white men.”

A sentiment, while not stated so blatantly, undoubtedly shared by more than a few of our presidents.

Less than three months after Pearl Harbor, tensions on the West Coast were very high. Two days earlier a Japanese submarine had surfaced off Santa Barbara and shelled an oil field there. The Los Angeles “attack” began in the evening of the 24th with air raid sirens wailing and a citywide blackout, and culminated with a heavy anti-aircraft barrage in the early morning hours of the 25th. 1,400 rounds of anti-aircraft fire were directed at an imaginary enemy, for there were no Japanese planes overhead. All damage came from friendly fire, and five deaths, due to traffic accidents and heart attacks, were attributed to the air raid. Although it was later discovered to be a false alarm, the hysteria didn’t end as twenty Japanese-Americans were arrested for sending signals to the non-existent bombers.

On the upside though, it was reported to be one heck of a light show.

Moroccan travel writer. Perhaps the first travel writer in history. At the age of twenty-one, Ibn Battuta set off on a pilgrimage to Mecca. The journey was expected to take sixteen months; instead he was gone for twenty-four years. He wrote a journal of his travels, which included most of the Muslim world, and also non-Muslim areas reaching as far away as China.

From Ibn Battuta’s journal: “I set out alone, having neither fellow-traveller in whose companionship I might find cheer, nor caravan whose part I might join, but swayed by an overmastering impulse within me and a desire long-cherished in my bosom to visit these illustrious sanctuaries. So I braced my resolution to quit my dear ones, female and male, and forsook my home as birds forsake their nests.”

Ah yes, I recognize it, the wanderlust that has beaten forever in a young person’s heart.

U.S. Navy Admiral. Commander of the Pacific Fleet during WWII. Nimitz held the rank of Fleet Admiral, a newly created rank just for him. Nimitz clashed with General MacArthur over war strategy in the Pacific. He wanted to bypass the Philippines and invade Japanese-held Formosa, now Taiwan, instead. That strategy would have cut Japan off from its colonies and supply routes and ended the war sooner with fewer casualties. MacArthur wanted to take back the Philippines, many believed to assuage his own ego. Nimitz’s plan has been criticized because it would have meant the sacrifice of the U.S prisoners held by the Japanese in the Philippines, none of whom would probably have survived. Counter argument was how many more thousands of American lives were killed saving them. FDR chose MacArthur’s plan.

There was probably more than war strategy involved in this decision. President Roosevelt, a Democrat, wanted, against Republican wishes, General Marshall to be Chief of Staff of the Army. MacArthur was a darling of the Republicans. So FDR got Marshall and MacArthur got the Philippines.

Businessman and co-founder of Apple, Inc. Jobs had much to do with the innovation and evolution of technology as we now know it today. This isn’t ancient history, so you all know the story. Jobs died, a very wealthy man, of cancer in 2011.

I’m using an Apple product right now to churn out this blog. 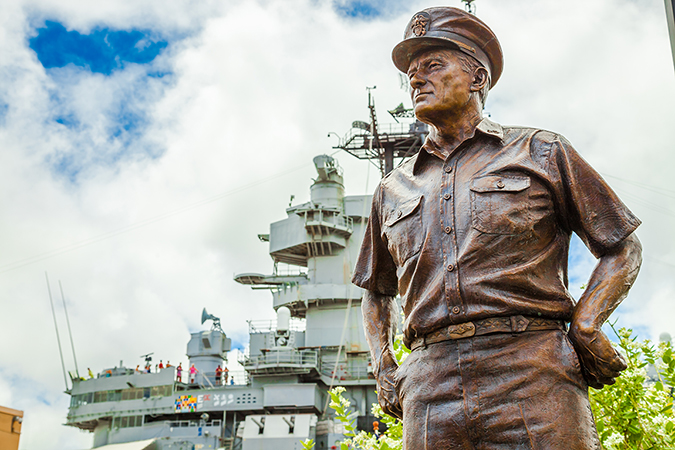 This Day in History – June 4 – Hijinx, Humor, and Insight

This Day in History – June 1st – Hijinx, Humor, and Insight