THIS DAY IN HISTORY… FEBRUARY 28

Organized by the Socialist Party of America (SPA), the first observance was held in New York City. Later the annual date was changed to March 8th. The idea was suggested by a woman named Theresa Malkiel. Russian born, Malkiel moved to New York in 1891 at the age of seventeen. She saw socialism as the only way for women to be liberated. She joined the SPA and soon rose to a leadership position. She eventually called out the party both for its racism and chauvinism. In Mississippi she stood outside in the rain to give a speech to African-American socialists who were not allowed inside the socialist hall. Here are two of her statements on those issues:

“Lord preserve us from this kind of Socialists….We must not preach Socialism to the negroes because the white workingmen are foolish enough to allow their masters to arouse their prejudices against their fellow workers in order to keep them divided so as to play off one against the other.”

“For the workingwoman of today finds herself between two fires—on the one hand, she faces the capitalist class, her bitterest enemy; it foresees a far-reaching danger in her emancipation and with all the ability of its money power tries to resist her eventual advent into the civilized world. In her anguish the workingwoman turns towards her brothers in the hope to find a strong support in their midst, but she is doomed to be disillusioned, for they discourage her activity and are utterly listless towards the outcome of her struggle.”

The more things change, the more they stay the same.

Von Ossietzky was critical of the Nazi Party, wrote articles condemning anti-Semitism, and as a journalist exposed the German government for its illegal rearmament in violation of the Treaty of Versailles. He was charged with treason for this act, and in 1933 sent to a concentration camp. In 1935 he was awarded the Nobel Peace Prize, much to Hitler’s anger. The Nazis responded by prohibiting any German from receiving the Nobel Prize. Von Ossietzky was not allowed to leave Germany for the ceremony and he died in prison in 1938. Fearing German reaction, the Norwegian Royal family did not attend the ceremony.

Courageous is the adjective to describe von Ossietzky. The same word is not applicable to the Royal Family.

Southern blacks were migrating to Detroit to work in its factories. Public housing was built in a white community to address the housing shortage. Whites objected to blacks living in the complex. On February 28th 1,500 protestors, with KKK support, gathered to prevent black families from moving in. There were clashes, and police and the National Guard had to be present to prevent greater violence. This was the beginning of an escalation of events that led to the Detroit race riots of 1943. Another incident occurred when three blacks were promoted to work alongside white workers on the assembly line. 25,000 white workers walked off the job in protest, effectively shutting down production for the war effort.

Not exactly a noble display of patriotism. I imagine defending the purity of the white race was the rationalization. And in the perspective of many, I’m sure it is still not as egregious of an act as kneeling for the national anthem.

Born in Windsor Castle, Margaret was a bargaining chip in Scottish-Norwegian conflicts. At age 20, as part of a settlement deal, she was married to King Eric Magnusson, age 13, of Norway. She died two years later in childbirth.

King and Queen? More like pawns in a royal game.

Cartoonist. Caniff had two very successful syndicated cartoons, “Terry and the Pirates,” and “Steve Canyon.” Lesser known was “Male Call.” This was a comic strip he wrote during WWII and was only published in military newspapers. The aim was to remind men why they were fighting. It focused on enlisted men and gave an honest depiction of them and the cost of war. In one strip a wounded soldier with one arm is being ridiculed for his disability. His date, a beautiful woman, comes to his defense. Caniff donated “Male Call,” receiving no payment.

I only vaguely remember some Terry and the Pirates strips and wasn’t a fan of Steve Canyon. But while I’ve never heard of Male Call before, it certainly seems an admirable effort.

Stage and screen actor. He is best known for his roles as Tevye in “Fiddler On the Roof,” and Max Bialystock in “The Producers.” A large man, Mostel was nevertheless light on his feet and his jowly face seemed to be made of rubber given how expressive it could be. At the height of his career Mostel was blacklisted due to his suspected Communist ties. At his hearing before the House Un-American Activities Committee he was both combative and funny. In the 70s Mostel had a major role in Woody Allen’s “The Front” which dealt with the blacklist. Mostel died in 1977 at age 62.

Zero Mostel was one of my favorite entertainers and I admired him for his stance against the HUAC. And “The Producers” ranks as one of the most outlandishly funny films I have ever seen. 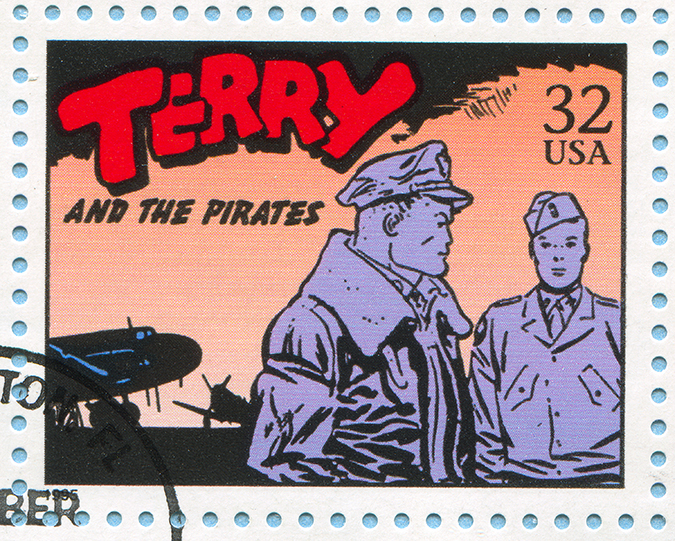