THIS DAY IN HISTORY… JANUARY 8

Unbeknownst to combatants on either side, a peace treaty ending the War of 1812 had already been signed. New Orleans was of strategic importance in that Britain wanted to control it and trade on the Mississippi River. General Andrew Jackson had been sent to repel the British invasion. Jackson commanded a motley force of army regulars, militiamen, free blacks, Choctaw Indians, and even some pirates led by Jean Lafitte. They numbered about 4,500 and faced off against 8,000 redcoats. He had a seven-foot-high earthen rampart built extending a mile from the Mississippi to an impassable swamp. The battle began at daybreak with a cheer from the British soldiers and an artillery barrage. The throng of redcoats advanced on the American line and Jackson’s artillery, 24 cannons, many of them operated by Lafitte’s pirates, opened fire, along with musket fire up and down the line. The effect was devastating as droves of British soldiers were cut down. The battle was over in 30 minutes. The British suffered 2,000 casualties including three generals and seven colonels. The victory made Jackson a national hero and many mistakenly believed it ended the War of 1812. While the result of the war was essentially a draw, Britain was never able to establish a foothold in America.

This is the most I’ve learned about this famous battle since Johnny Horton’s ballad, “Battle of New Orleans.”

From History.com: “On January 8, 1835, President Andrew Jackson achieves his goal of entirely paying off the United States’ national debt. It was the only time in U.S. history that the national debt stood at zero.”

At the beginning of 2020 the national debt was 22 trillion, the highest in history, and rising. Where were all the raging deficit hawks? Oh, that’s right, they were quietly hiding out as the majority  party in the U.S. Senate.

In his first state of the union address President Lyndon Johnson declares war on poverty. Johnson stated: “Our aim is not only to relieve the symptom of poverty, but to cure it and, above all, to prevent it.” Some of the programs established then such as VISTA, Head Start, and the Job Corps remain in existence today, despite heavy criticism and political attacks.

Hey, you got to cut down on that 22 trillion dollar deficit somewhere.

There was comic named Jackie Vernon at the time. In his routine he said he was in favor of Johnson’s War on Poverty, so he threw a hand grenade at a beggar.

Communist politician. A Bolshevik during the Russian Revolution, Malenkov quickly rose up through the ranks of the Communist Party. He was one of the five most powerful men in the country during WWII and afterwards coordinated the building of nuclear weapons in the Soviet Union. He was favorably noticed by Stalin and worked closely with him during Stalin’s mad purging of enemies of the state, which included many of the heroes who had helped defeat Germany. After Stalin died in 1953, Malenkov succeeded him as leader of the Soviet Union. Briefly. He lasted about 10 days as head of the Secretariat, but held onto the premiership until 1955, when he was forced to resign and later replaced by Nikita Khrushchev.

Malenkov lived until 1988 when he died of natural causes, despite leading a failed coup against Khrushchev after which he was expelled from the party and exiled to a remote region to run a power plant.

Given the usual political intrigues behind the Iron Curtain, Malenkov was lucky to have escaped without a bullet to the back of his head.

Stripteaser. She was also a political activist and a writer, having a best selling murder mystery published. Lee and her sister, actress June Havoc spent their childhoods under the management of an aggressive, cruel and probably insane stage mother. They received no formal education as they traveled the vaudeville circuit. After June ran away at age 13 and got married, the act continued less successfully without her, and as vaudeville died, Lee’s mother booked them into burlesque houses. One night, when Lee was 15 or 16, a headliner was unable to perform, her mother volunteered Lee to fill the spot, and Gypsy Rose Lee was born. Modest, she perfected the art of the striptease rather than stripping. She also developed a comic and witty patter to go along with it. Here is a quote of hers: “If a thing is worth doing, it is worth doing slowly. . . very slowly.” Gypsy Rose Lee’s fame grew until she became the most famous striptease artist of all time.

Lee supported the labor movement in the 1930s and was a speaker at union rallies. She opposed Franco and sided with the Loyalists during the Spanish Civil War and raised money to aid Spanish children suffering in that conflict. She was investigated by the Committee on un-American activities for her connections to the Communist United Front. She had one child, a son fathered by Hollywood director Otto Preminger. Gypsy Rose Lee died of lung cancer in 1970, a moderately wealthy woman.

A communist stripteaser and a supporter of Loyalist Spain, how can I not like her?

Rock and roll musician. Or simply, the King of Rock and Roll. No sense retelling a story everybody knows, but here are a few interesting quotes found in Wikipedia.org. Elvis auditioned with a singing quarter and was rejected. He recounted to his father, “They told me I couldn’t sing.” Another rejection by a band followed where he was told to stick to truck driving because he would never make it as a singer. When he showed up at the office of music producer Sam Phillips, the receptionist Marion Keisker asked him who he sounded like. Elvis replied, “I don’t sound like nobody.” And finally. Keisker also said about Phillips, “Over and over I remember Sam saying, ‘If I could find a white man who had the Negro sound and the Negro feel, I could make a billion dollars.’”

Kind of says it all, doesn’t it?

* Lead-In Art (Elvis playing cards) – Dan Kosmayer / Shutterstock.com – “TORONTO, CANADA, Nov 1, 2016 : Elvis collectors memorabilia from the “King of Rock and Roll”, he is known as one of the most significant cultural icons of the 20th century.” 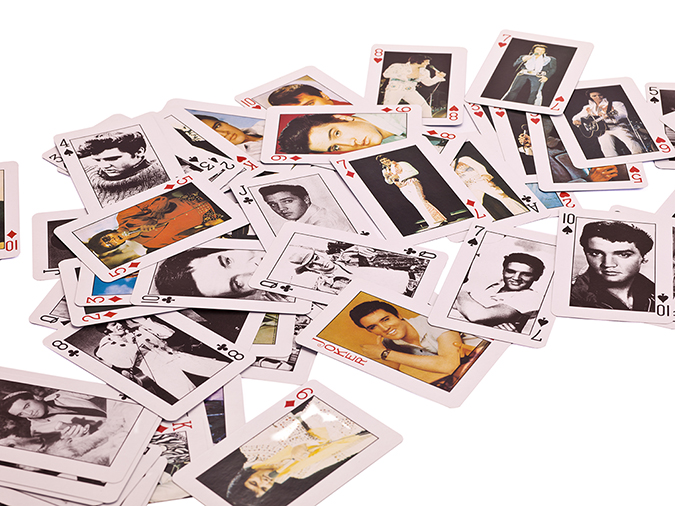