THIS DAY IN HISTORY… JULY 14

The Bastille was a prison fortress in Paris that symbolized the rule of the monarchy. Forewarned, the military governor of the prison had strengthened his defenses with additional men and gunpowder but the revolutionary mob became too large to withstand. He surrendered and the seven prisoners inside were released. The governor was later murdered by the mob. This event signaled the beginning of the French Revolution. The next decade was filled with turmoil and terror and ended with the King and Queen being guillotined.

We read “A Tale of Two Cities” in high school English and it was there I first learned of the Bastille and French Revolution.

Joseph Priestly was a Protestant living in Birmingham who questioned the doctrine and authority of the Church of England. He and his followers, known as Dissenters, were also sympathetic to the French Revolution. Each year they held a party celebrating the storming of the Bastille. Feeling their own monarchy was being challenged, this was too much for the religious population of Birmingham. First Priestly’s home and church were attacked, and then fueled by alcohol, four more churches and twenty-seven homes and businesses of Dissenters were burned. The rioters also attacked a scientific society. Pleas to local authorities to stop the attacks, which continued for three days, were ignored. It is believed the local authorities were involved in the planning of the riots and few charges were brought against those participating. After it was over many Dissenters fled Birmingham leaving it a more conservative city.

Musician, writer. Born in Oklahoma, Guthrie married young, had three children, and tried to support his family as a sign painter. When the dust storms wrecked Oklahoma’s economy he left his family and rode the rails to California seeking work. In Los Angeles he got a job playing hillbilly music on a radio station and he wrote a column for a communist newspaper. He did well enough to send money back to his family in Oklahoma. Politically Guthrie was left-leaning, his guitar sported a slogan that said, “This machine kills fascists.” He never joined the Communist Party but was a “fellow traveler”, someone who sympathized with their cause. Nervous over his political views the station let him go and he traveled to New York City where he recorded his first album, “Dust Bowl Ballads.” It was also at this time he wrote his most famous song, “This Land is Your Land.” He said he wrote it to counter the overplaying of “God Bless America” on the radio.

During WWII Guthrie joined the Merchant Marine and made a number of trips across the Atlantic. One of his ships struck a mine and another was torpedoed off Utan Beach on D-Day. Both remained afloat and were able to return to port. Guthrie was kicked out of the Merchant Marine because of his association with the Communist Party and was then drafted into the U.S. Army. (Huh?) He continued to write songs and books and play his music until he was stricken with Huntington’s Disease. He was married three times and had eight children, one of whom, Arlo, also became a popular musician. Two of Guthrie’s children died from Huntington’s as had his mother. Guthrie died in 1967 at age 55. Inspired by his legacy, generations of songwriters have followed in his wake including Ramblin Jack Elliot, Harry Chapin, Tom Paxton, Pete Seeger, his son Arlo and Bob Dylan.

September, 1965. The final leg of a most memorable journey. Rick and I were returning to Minnesota after a summer of hitchhiking across Europe. After docking in New York, our thumbs were still our only mode of transportation to return to Minnesota. We had gotten picked up somewhere in Indiana by a young couple, graduate students returning home to Madison, Wisconsin. Not remembering what their actual names were, I’ll call them Lowell and Marlene. He was tall and thin, she short and a bit plump, and both projected an air of intellectual seriousness. They were driving a VW Bug and with their luggage, and our luggage, it was a rather tight and uncomfortable fit for Rick and I in the back seat. Still, a ride was a ride was our motto. Somewhere between Chicago and Madison the skies opened up and we were pelted with a heavy rain. The storm was still in process when we reached Madison. We had ridden with Lowell and Marlene all day and had gotten along with them well. So they were apologetic as they dropped us off under an overpass before driving away.

Rain slashed down at an angle on either side of the bridge and we understood our prospects weren’t good. Visibility was bad, car headlights would appear and disappear so quickly hitchhiking was futile. We’d get soaked if we tried walking to another location. During the course of the summer we had become quite creative in getting out of difficult situations but this time we were stymied. It must have been around eleven and we had a long, chilly night under a bridge ahead of us. Then to our surprise a set of headlights slowed and then pulled to the side of the road. Another VW Bug. No, not another but the same one. Lowell had returned.

“With the storm and all, we couldn’t just leave you guys standing here. Want to come back to our place?”

They lived in a second floor apartment in an old house near the campus. Rick slept on a couch and I on some cushions on the floor. Lowell opened a phonograph and put on two LP albums. “Help you sleep. Have you ever heard of Woody Guthrie?”

Rich had, I hadn’t. Rick said, “Oh, you’re going to love him.” That was my discovery of Woody Guthrie and Rick was right. Lowell and Marlene went to their bedroom. Rick suggested maybe the idea for the music was that they had something else in mind. Rick soon fell asleep while I remained happily wide awake. Lightning bolts lit the dark room, thunder shook the house and Woody Guthrie painted a portrait of an America not so long gone. Even as it was happening I knew I was experiencing a special night in my life. Young, and while not entirely formless, I was still being shaped into whatever kind of person I’d eventually be. That night was another step, a step away from the conventional as I drifted in the direction of the America Woody Guthrie sang about. Thank you Woody, and happy birthday. 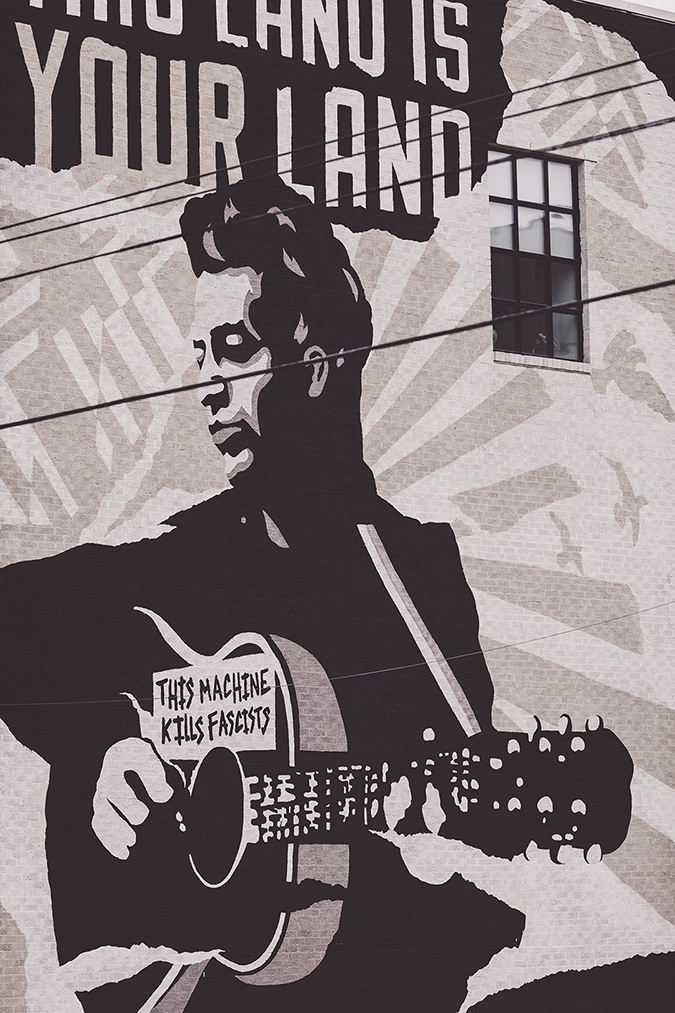