THIS DAY IN HISTORY… JULY 15

An invading Swedish army was defeated by a much smaller, and mostly civilian, army from the Russian city of Novgorod. The intent of the Swedes was to establish a trade route and also to force the Russians to convert from Greek Orthodoxy to Catholicism. Both sides believed to have God on their side. Led by Prince Alexander Varoslavich, the Novgorods initiated a sneak attacked on the Swedish camp and emerged victorious. The little known about this battle is all from the Russian side, none from the Swedish.

As they say, history is written by the victors.

Taking off from Floyd Bennett Field in New York, Post returned to the same field just under eight days later. He made eleven stops for fuel and rest, including Berlin, several in Russia, Alaska, and Canada before returning back. Post was an unlikely hero. One-eyed, he wore a patch over one eye, dropped out of school after sixth grade, worked as oil field roughneck, and turned to armed robbery, for which he served time in the penitentiary; he nevertheless always harbored a dream of flying. Wanting to fly at extremely high altitudes, Post also help develop the first pressure suit. Post died in a 1937 plane crash in Alaska with fellow Oklahoman and friend, humorist Will Rogers. They were attempting to fly over the North Pole to Russia when they crashed near Point Barrow. At one point in his life Post tried to start his own flying school but because of his lack of education, even with his notoriety, could not find financial backing.

As is well known, letters behind your name can mean as much or more than mere achievements.

Lindh, an American citizen fighting with the Taliban, was captured by the Northern Alliance in Afghanistan in November, 2001. Raised in northern California, Walker converted to Islam at age sixteen. He went to Yemen in 1998 to study Arabic, and eventually ended up in Afghanistan. He maintained he was fighting for Islam, and did not intend to oppose the United States. Once U.S. forces were there, he said he wasn’t allowed to leave and was forced to continue fighting. There was a Taliban uprising at the prison where Lindh was being held and of the several hundred prisoners there, only eighty-six were still alive after the riot. He was shot in the thigh during the quelling of the riot. An American interrogator was also killed. That death was included in the case against Lindh. A plea bargain allowed him to plead guilty to lessor charges and he was sentenced to twenty years in prison. Lindh saw Spike Lee’s movie Malcolm X at a young age and it initiated his interest in Islam. Lindh now goes by the name Sulayman al-Irandl.

It’s strange what can light a person’s candle and change the direction of their life. You wonder what might have happened had he picked a different movie that day. Or would he have seen a different sign and still ended up in the same place?

Theologian and writer. He may or may not have anonymously penned the Christmas poem “A Visit from St. Nicholas.” The poem is better known as “Twas the Night Before Christmas.” First published in 1823, it wasn’t until 1837 that it was attributed to Moore. The family of Henry Livingston, Jr., however, later claimed that it was he who had written the poem. Livingston never claimed authorship himself, and Moore because of his prestigious position as a scholar and university professor, wasn’t sure he wanted to be associated with it either. So their families were left to fight it out. The controversy still exists today with the evidence leaning slightly to Livingston’s side.

In researching this topic I found that Moore owned a few slaves, and was against the abolition of slavery, so my vote goes to Livingston.

Copas was a popular country western singer and a regular performer on the Grand Old Opry. On March 3rd, 1963, he died in a plane crash along with Hawkshaw Hawkins and Patsy Cline.

I was halfway through my tour at Holiday Beach Naval Communication Station at the time of this event. I had never heard of Cowboy Copas or Hawkshaw Hawkins and thought their names kind of funny. Patsy Cline, of course I knew, but unlike some of my crewmates, I wasn’t a country western fan. To them, when the news reached us, it hit hard. We were one radio station, one barracks, isolated from the main base. We were surrounded by nature’s grandeur and beauty but after a while that mattered little. We were also encapsulated in a near impenetrable cocoon of boredom. Trapped by the snowcapped mountains behind us, the endless expanse of the northern Pacific in front, day after gloomy day was the same. Other than work there were no diversions. So news such as the plane crash, tragic though it was, had a significant impact upon our little community. Something to occupy our minds, talk about, speculate upon. Energy flowed for a few days, sad energy but even if in a negative way spirits were awakened. I guess in our situation bad news was better than no news. So while the crash did not touch me the way it did some, I remember the event well.

Professional football player and actor. Karras was a defensive tackle with the Detroit Lions from 1958 to 1970. He made the Pro Bowl four times. As an actor he had a memorable appearance as Mongo in “Blazing Saddles,” acted in the TV series “Webster,” and had a significant role in the movie “Victor/Victoria” with James Garner and Julie Andrews.

In the early days of the Minnesota Vikings they had a bit of a wild man as a coach, Norm Van Brocklin. The Vikings were to play the Lions in Detroit and Van Brocklin had learned that Karras had notoriously bad eyesight and couldn’t wear glasses while playing. So instead of taking along their away uniforms, Van Brocklin had the Vikings bring their home uniforms because they were similar in color to Detroit’s uniform. The idea being Karras would get confused and maybe tackle the wrong players. I liked the NFL better in those days.

* Lead-In Image (stock photo) – Everett Historical / Shutterstock.com – “Will Rogers and Wiley Post before their ill-fated flying exploration of Alaska. The plane behind them was an unstable combination of a Lockheed Orion fuselage with wings from a different Lockheed airc[raft].” 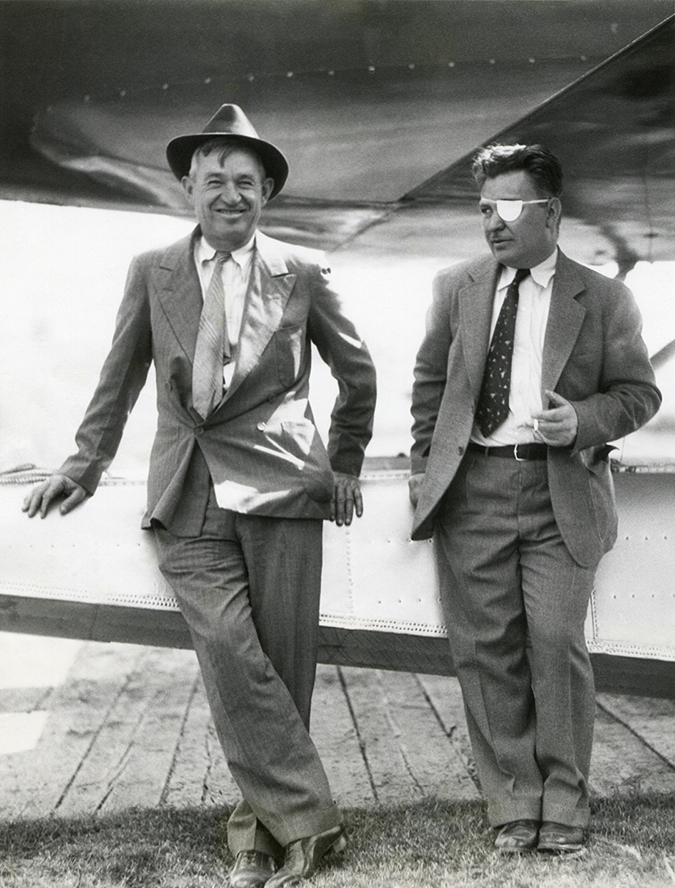