THIS DAY IN HISTORY… JULY 2

After a heavy thunderstorm over Charleston, South Carolina, an alligator was found at the corner of Wentworth and Anson. Since it had no other way of getting there, it was surmised it had rained down. Possibly a tornado had picked it up and dropped it there. As if to prove the point, the New Orleans Times-Picayune reported: “That the beast had a look of wonder and bewilderment about him that showed plainly enough that he had gone through a remarkable experience.”

I’m still trying to picture an alligator with a “look of wonder and bewilderment.”

Named after Senator John Sherman of Ohio, the law was aimed at breaking up monopolies to insure fair and competitive business practices.

From Wikipedia.org: “The purpose of the Sherman Act is not to protect competitors from harm from legitimately successful businesses, nor to prevent businesses from gaining honest profits from consumers, but rather to preserve a competitive marketplace to protect consumers from abuses.”

It would be no surprise to me if that law were repealed any day now.

At the second day of the Battle of Gettysburg, a breach opened in the Federal line. Four Confederate regimens charged and advanced toward Cemetery Ridge. The Union line was in danger of being split, and with that the Rebels could win the battle. It was what General Lee, and the entire Confederacy, was hoping for: a major victory on the field of battle, and then marching on Washington D.C. and force the Union to sue for peace. The only reserves Union General Winfield Hancock had available were the 1st Minnesota. The exact numbers are uncertain. About 1,000 to 1,200 Alabamians were charging forward; the 1st Minnesota consisted of less than 300 men. Hancock didn’t order the outnumbered Minnesotans to just hold the line; to buy more time he ordered them to meet the charge with a charge of their own.

Fifteen vicious minutes later, giving Hancock time to bring up reinforcements, the day was saved for the Union. The three-day Battle of Gettysburg is filled with stories of heroic sacrifice. No Union regiment sacrificed more that day, however, than the 1st Minnesota. Over 80% of its ranks were either killed or wounded. Only 47 members escaped unscathed. If that wasn’t enough, they lost 17 more men killed the next day repelling Pickett’s Charge. The regiment in effect no longer existed, so it was officially disbanded. There is a good book about the 1st Minnesota’s exploits called “The Last Full Measure.”

I toured the Gettysburg battlefield with my friend, Dick. There is a very well done theater presentation about the battle. In it, at least when I was there, the 1st Minnesota was the only unit to get called out by name for its exploits. We toured battleground by bicycle, which is definitely the way to do it to get a better feel of the history of that time in history. We were stopped by a tour guide who was thinking of leading tours in that same fashion. He asked if he could take our pictures and use them in a brochure. We agreed so if you ever go to Gettysburg and see a bicycle tour brochure with two old men on bicycles, that’s us!

Larry Walters attached forty-five helium filled weather balloons to a lawn chair and ascended to 15,000 feet above the Mojave Desert. He brought along a pellet rifle with the idea of shooting balloons to descend slowly back to the ground. He was also equipped with a parachute, CB radio, camera, sandwiches, and beer. Things did not exactly go as planned. He drifted into commercial air space over the Long Beach Airport and when he tried to shoot some balloons he dropped the air rifle. When he did descend, he got tangled up in power lines and caused a blackout in Long Beach. Arrested, the fine was minimal, and he did gain some notoriety, but never did capitalize financially on his adventure.

Having had a few of my own, nothing of this magnitude, I’m always impressed by bad ideas. I’m not talking the garden variety backyard video seen on TV or YouTube where someone is usually marginally injured, I’m looking at those with a germ of magnificent at its core and this one certainly qualifies. In the annals of all time bad ideas, not to make a bad pun, this one ranks way up there.

German pilot in World War II. Fighting entirely on the Eastern Front, Rudel was the most decorated soldier in the Third Reich. Known as the Eagle of the Eastern Front, the Russians put a 100,000 ruble “dead or alive” reward on Rudel’s head. Here is an account of Rudel’s record from DonHollway.com: “In all, Hans-Ulrich Rudel was credited with 2,530 missions, one battleship, one cruiser, a destroyer, 70 landing craft, some 800 vehicles, 150 gun positions, numerous armored trains and bridges, 519 tanks and nine aircraft. He had been shot down more than 30 times (never by an enemy pilot) and wounded five times.”

He once swam a nearly frozen river with a bullet wound in his shoulder to escape pursuing Russian soldiers, another time in heavy fog and low on fuel he taxied his plane 25 miles to escape, and by the end of the war was flying with one leg, the other having been shot off. On the last day of the war, he led his squadron behind Allied lines and crash-landed so as to be captured by Americans rather than Russians. He claimed to be fighting for Germany and not the Nazi party. Unrepentant to the end, he was an advisor to the Argentinian military junta that launched the Falkland Islands War against England.

Some people sure are slow learners. His “heroic” actions did more to prolong World War II than win it, and at the cost of how many Jewish and other civilian lives in Nazi-held territory? 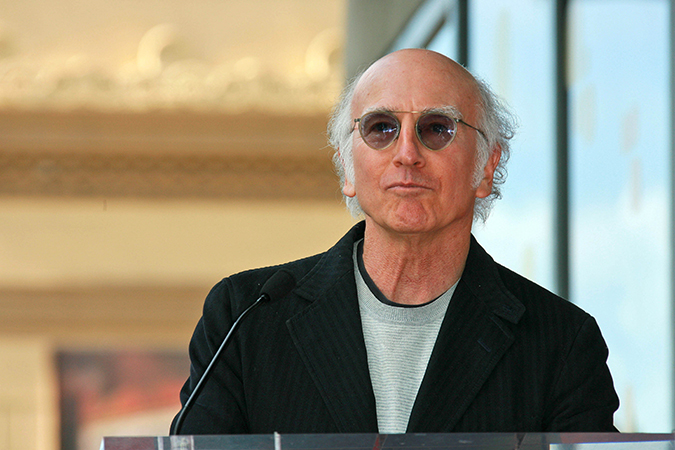 Comedian, actor, producer, and writer. Along with Jerry Seinfeld, he created the hit TV comedy series “Seinfeld.” David was head writer and executive producer of the show for seven years. He also produced and starred in the HBO comedy series “Curb Your Enthusiasm.” David discovered while in college that he could make people laugh simply by being himself.

To my chagrin, I have exhibited that same talent many times in my life.