THIS DAY IN HISTORY… JULY 9 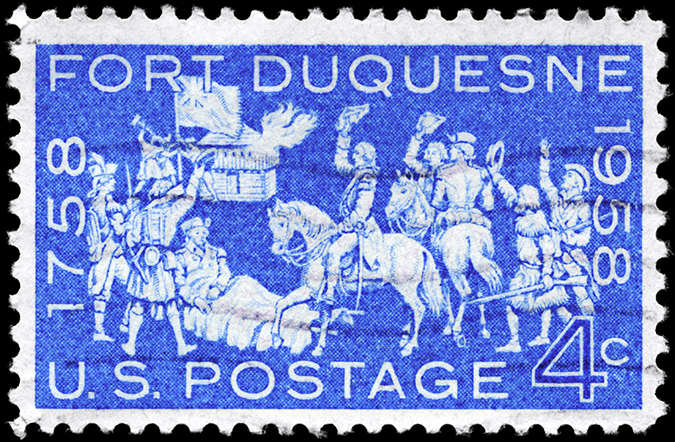 Fighting for control of the Ohio River Valley, this was a strategic battle during the French and Indian War. The British wanted to expand their colonization westward and the French in Canada coveted the same region for their fur trading empire. The French fort overlooked the convergence of three rivers and allowed them to control river trade. A large army of 6,000 British soldiers and American colonists, including George Washington, marched to take the fort. An advance party of 900 men went ahead to scout the fort. Their commander thought the fort to be significantly under strength, so he attacked. Outmaneuvered and outfought by the French and their Indian allies, the British were routed. While the French were technically the victors at the Battle of Fort Duquesne, they realized they were no match for the larger British force still advancing. So they burned and abandoned the fort. The British rebuilt it as Fort Pitt, later to become the city of Pittsburgh. Their subsequent defeat in the French and Indian War caused the French to lose their foothold in North America.

And as the saying goes, the rest is history.

The governor of South Carolina had allowed black militias to form to protect black communities. Hamburg was one such town. On July 4th a black militia company was on parade in Hamburg. Two white men thought they had the right to pass through their ranks, and took umbrage when this wasn’t allowed. They spread the news of this indignation throughout the countryside and a former Civil War general rounded up a large body of men from white militias. They marched on the town, the black militia refused to lay down its arms, and a battle ensued. One white man was killed before the black militia ran out of ammunition and was forced to flee. Some were captured and taken to what later became known as the “Death Ring,” and five were executed. The white militia then robbed the town of its valuables.

I’m sure there were many fine people on both sides. 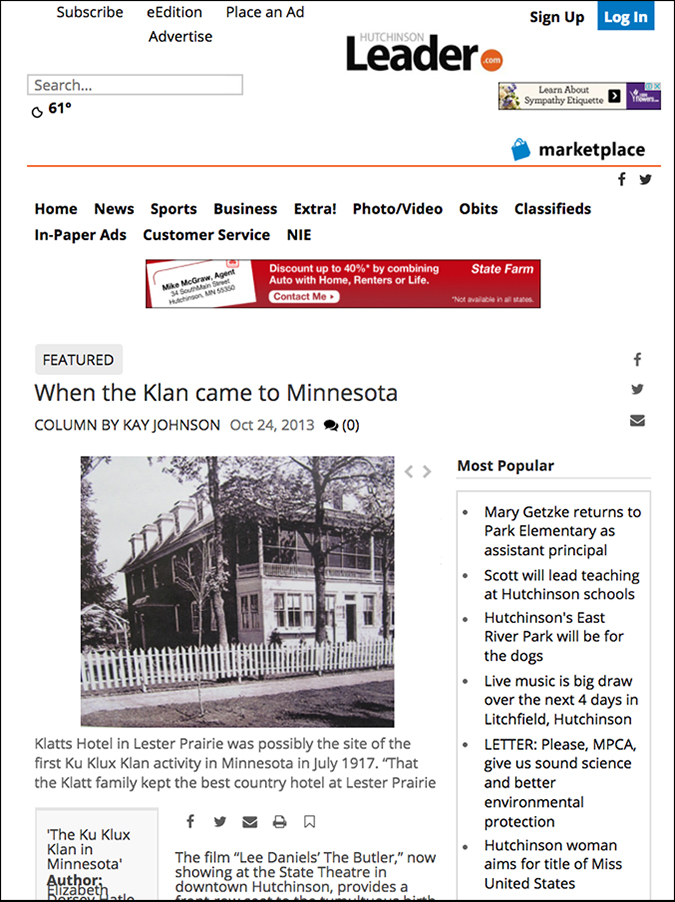 What may have been the first incident of Ku Klux Klan activity in Minnesota took place in my hometown, Lester Prairie. The target was the Klatt family, owners of the Klatts Hotel. “That the Klatt family kept the best country hotel at Lester Prairie to be found in any town of this size in the state is a fact known to the traveling public. That fact alone, it would seem, should have spared them the mob violence visited upon them by the citizens of Lester Prairie one night last July. The Klatts have done the right thing in employing a detective and rounding up the toughs in the gang that assaulted them,” reported the Hutchinson Leader, Nov. 2, 1917.

There was patriotic zeal at this time over America’s entry into WWI against Germany. The Klatts, two brothers and two sisters, were German immigrants. There were rumors that the Klatts had never taken out citizenship papers, did not buy liberty war bonds, did not contribute to the Red Cross for the war effort, and refused to sign an loyalty oath.

Around 11 pm on a warm July evening, all the electric streets lights in the village mysteriously went out. One of the Klatt brothers came outside to investigate, and was set upon by a dozen men wearing white hoods over their heads. They began to beat him viciously and his brother, hearing his cries, came to his aid. He also was assaulted. The two sisters next come outside. They were pelted with rotten eggs and then stones were thrown, breaking windows in the hotel. No law enforcement came to their aid. One man saw the beginning of the attack and fled the scene. The next day a local policeman told him he better keep quiet about what he saw.

The press articles at the time sided with the attackers. The area newspapers listed the grievances against the Klatts, as if justifying the attack, or insinuating they deserved it because they were German immigrants.

There was no official investigation, but the Klatts refused to let the matter drop. They hired a detective who found out the identities of the attackers. Charges against the men, who became known as the Lester Prairie 12, were brought in November of that year.

I had never heard about this incident until a few years ago. From my father I had heard of the good reputation of the Klatts Hotel. A nursing home for the elderly when I was a kid, it was located a block from the train depot. Salesmen would take the train out from the Twin Cities, rent a horse and buggy from a local livery stable, and trot out of town to sell their wares to the area farmers. My father sold newspapers as a kid and he said the Klatts Hotel was a good place to go because if the salesmen had a good day, they would leave him a tip. Dad was only four at the time of the attack so would have had no knowledge of it.

The KKK in Minnesota was mostly Scandinavians and there being few minorities to discriminate against, they became anti-Catholic. When WWI started, they turned their ire on German immigrants. At the time there were efforts by German-Americans to prove they were good Americans. A neighboring town is named New Germany. During the war they changed it to Motordale. And sauerkraut became liberty cabbage, which is possibly even sillier than freedom fries.

Nowhere in the newspaper accounts did it list the names of the Lester Prairie 12. It was as if they were being protected. I was anxious to find out if I had a relative, like a grandfather, in that group. I had to dig up McLeod County court documents where I found the list of indictments before I saw the names of the men involved. Most of the surnames were familiar and I had a family connection to three of the men. The leader of the pack, the town’s veterinarian, was married to my maternal grandmother’s sister. Another, married to my maternal grandfather’s sister, turned state’s evidence. I remember him from when I was young. A raconteur, drink ever present in hand, he held center stage at family gatherings. I doubt any of his stories involved the KKK.

The third family member was my maternal grandmother’s cousin. He had recently emigrated from Germany and was living on my grandparents’ farm while getting settled in America. I suspect he was trying to prove he fit in, was a good American, and got caught up in a bad idea. He later joined the American army and fought in France. His brother, still in the home country, was in the German army. Both survived and the other brother also eventually came to America.

Until recently Lester Prairie was always about 98% German. When I was a kid, the Lutheran church I attended had services in both English and German. There has always been a heavy German influence in the town. People who had lived there for many decades still talked like they had just stepped off the boat. So an anti-German incident in a town almost totally German is more than a little ironic.

My investigative trail ended at the indictments. Searches through old newspapers turned up no articles about a trial. I suspect everybody just wanted it to go away, and to protect the guilty, so no more mention was made. I’m guessing there were fines leveed, but no jail time. If they had been found innocent that would have made the news. Some cold winter day I’ll have to hit the Historical Society again and try dig up some more old records.

Philadelphia Phillies pitcher Robin Roberts started the streak on August 28th, 1952. He started and finished 28 games in a row! On July 5th he pitched 10 innings to win the ballgame. Four days later the streak ended when he pitched only 7.1 innings.

In today’s baseball world, pitching 7 innings is defined as a significant accomplishment. There probably won’t be 28 complete games in the entire major leagues this year. To my baseball mind, starting and finishing 28 consecutive games is a near mythical achievement.

German writer. She was also the mother of the more famous German writer, Arthur Schopenhauer. For two decades she was the most popular woman writer in Germany. She was also the first woman writer there to use her own name and not a male pseudonym. Widowed, her house in Weimar became a gathering place for the literary celebrities of that era, including Goethe. One writer not there was her son, Arthur. They had a strained, and sometimes non-existent, relationship. He blamed her for his father’s death, possibly from suicide, and she found him pessimistic and haughty, and his manner too assertive. A spendthrift, by the end of her life she lived in near poverty on a pension. What money she did have she left to her other child, Adele. It didn’t matter, for Arthur was financially well off.

More important than money, however, she did bequeath him the writing gene.

Singer and actor. He started off as a member of the singing quartet the Ames Brothers. When the group broke up he launched a solo career and had a huge hit with “My Cup Runneth Over.” In the TV series “Daniel Boone,” he played the part of a Native American, although he was Jewish. That led him to the famous tomahawk-throwing incident on the Johnny Carson Show.

In his personal life Ames made the statement “I am a secular Jew, but I feel strongly about Israel and the Jewish communities of Europe,” and he became president of the Zionist Organization of America in Los Angeles.

He also played an Indian and threw a tomahawk on TV, so I wonder how he felt about Indian treaties.

Congressman and twice Secretary of Defense. He served in that role both under President Ford and President George W. Bush. Bush ordered him to modernize the military and make it a lighter fighting force. While doing that Rumsfeld oversaw two wars, one in Afghanistan and the other in Iraq. Seemingly impervious to criticism, he was not a popular figure within the military or the public. One of his quotes that gave him grief was “You go to war with the army you have, not the army you might want or wish to have at a later time.” (A bit insensitive to those doing the fighting, especially since he was the architect of the new army.) And then there was the famous “As we know, there are known knowns; there are things we know we know. We also know there are known unknowns; that is to say we know there are some things we do not know. But there are also unknown unknowns– the ones we don’t know we don’t know.”

I will cut Rumsfeld some slack. Bush’s administration, led by Cheney, was filled with Chickenhawks, those warlike creatures who were eager to defend America right down to the last drop of somebody else’s blood. Most of them were of the right age to serve during the Vietnam War but found a way to avoid military service. Deferrals, dubious health issues (bone spurs?) whatever, they collectively had an amazing record of non-service. Rumsfeld, a Navy pilot, was the exception.