THIS DAY IN HISTORY… JUNE 29 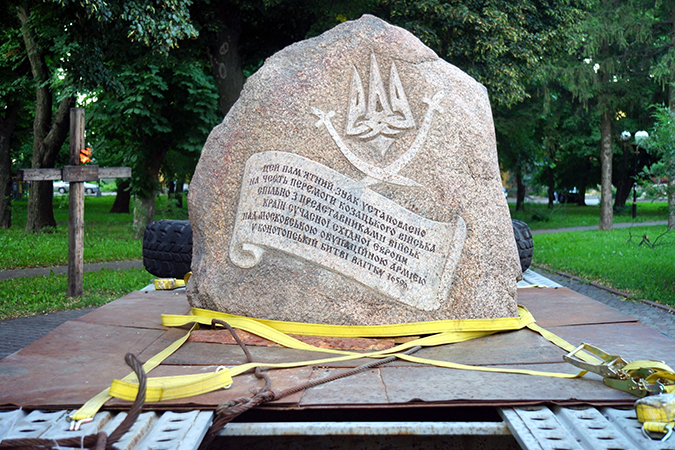 This took place in what is now Ukraine. It is a confusing historical event and the cast of characters all have long, unpronounceable names mostly void of vowels. No one seems certain what happened there: a great victory for Ukraine, or an insignificant one as Russia claims. It pitted Russian and Cossacks cavalry forces on one side against Ukrainian, Cossacks, Crimean Tartars, and Polish on the other. Historians in the Ukraine seem to multiply the number of Russian casualties with each passing century, while in Russia, using today’s language, it is thought of as fake history.

If history is indeed written by the winner, than I don’t think of it as fake history, but favorable history. When I look at what I was taught in grade and high school, and what I’ve learned since with more in-depth reading, it seems history can be manipulated by societal and governmental needs. History can be burdensome when all the facts are included, keeping it simple by just presenting favorable ones make it easier to digest. So I doubt I’ll ever reach an easy conclusion about the Battle of Konotop.

The act, imposing tax on paper, paint, lead, glass, and tea imported into the American colonies, received royal assent on June 29th. Proposed by Charles Townshend, Chancellor of the Exchequer, the taxes were designed to help alleviate war debt in England. Britain dismissed American protest of taxation without representation by saying they had “virtual representation.”

Oh Charles, little did you know what a can of worms you opened. Although if it could be sold, “virtual representation” is a masterstroke. Maybe that’s what we have now.

Subjected to Congressional hearings, Oppenheimer had lost his governmental security clearance and his appeal was rejected on June 29th. Head of the Manhattan Project and known as the “Father of the Atom Bomb,” Oppenheimer was hailed as a hero at the end of WWII. His past became suspect during the McCarthy hearing because of prior Communist affiliations. He was also opposed to the development of the hydrogen bomb and argued for international arms control. Incidentally, his wife’s first husband was killed in the Spanish Civil War as a member of the Lincoln Battalion. This was all enough to justify the revoking of his clearance despite him having the backing of the scientific community.

Somehow scientists progressed from hero status after WWII to being considered threats. There is still evidence of that today. Oppenheimer saw the hydrogen bomb as a threat to mankind. In response the government saw him as a threat to them.   Then, as now, political persuasion carried more weight than scientific evidence.

Brown was a Baptist minister in New England and later Virginia who published “New Hampshire Baptist Confession of Faith,” which was a more moderate version of Calvinistic beliefs. He was also a poet. One of his poems:

“Hints To A Young Preacher“:

“Your air is too dogmatic;

Your tones are too emphatic;

Your style has too much splendor;

Your voice has nothing tender;

Your gestures are too frequent far,

And quite ungraceful many area.”

1960 – Sergey Kopylov.  Russian bicyclist who competed in the Olympics and was an amateur champion.

1963 – George Hincapie (lead-in image, above). American professional bicyclist. He was part of the Lance Armstrong team when they (and their drugs) were dominating the Tour de France.

Although a long ways from the professional ranks, I’m an avid cyclist myself. And I have my own competitive streak. I was biking on the Elroy-Sparta trail in Wisconsin with my friend Tump. The Elroy-Sparta trail has some long, dark railroad tunnels, and it is recommended to bring a flashlight. But it is much more disorienting, and fun, if you don’t have one.

We had ridden a long portion of the trail and were on our way back when a young couple came riding up behind us. They had superior bikes, all the appropriate attire, and twenty years on us.

As they passed, they both called out, one after the other, “On your left.” Maybe I should have looked on it as them just being considerate, but there was something about their tone, their smugness, their attitude, that annoyed us both. Tump and I looked at each other, and with no words exchanged, took up the chase.

Being that we were on our way back we knew that section of the trail, and we knew there was a long hill not too far ahead. Pumping furiously we closed the gap as we approached the hill. They had slowed their pace and were talking. We blew by them at the base of the hill. Both of us called out an attitude-tinged “On your left.”

Momentum was on our side as we hit the hill with a full head of steam. It was hard for them to gather speed going uphill so we quickly increased the gap between us. I glanced back to see they had taken up the chase. They were younger, better bikers, and in better shape. Our performance-enhancing drug of choice was Leinenkugels and while it is good for energetic bursts, endurance suffers. So with the outcome of this race predictable, when we crested the hill and were for a moment out of their sight, I said, “Tump, there, stop!”

His thoughts were along the same line and understood immediately. We braked to a stop, hopped off our bikes and pushed them into the bushes alongside the trail. We were no sooner hidden when our pursuers came into view. Hands dropped low on the bars, backs bent, jaws clenched, neck muscles taut, they pedaled past at a determined pace.

We biked back to the closest town and had a cold beer. I sometimes wonder how far they chased us. They either figured it out or thought those two old guys could really bring it.

* Konotop Marker (photo)  – Valerii Iavtushenko / Shutterstock.com – “Poltava, Ukraine. Text: This memorable sign established to commemorate the victory of the Cossack army, with the forces of Europe over Moscow’s occupation army in the Battle of Konotop summer 1659.”