THIS DAY IN HISTORY… MARCH 22 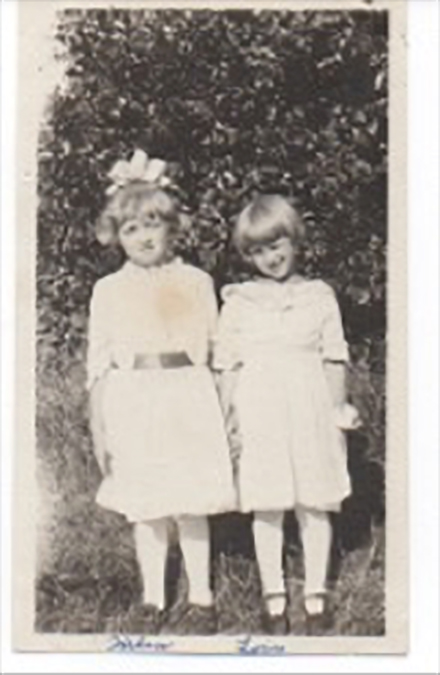 1916 – My mother, Lois Louise Jenneke nee Ernst, is on the right, with her older sister, Helen. Their German speaking grandmother labeled Helen, die nette, and Mom, die wilde. The nice one and the wild one. Of course everyone’s mother is special to them, as was my mother to me. But I’d also have to put my mother in the unique category. That’s not my opinion alone, most people who met her felt the same. For one thing she was pretty hard not to like. She had an open and inquisitive approach to life with a genuine interest in others. Mom had an infectious personality, was full of energy and loved to talk, laugh, dress up in nice clothes, and dance. Despite being an absolute teetotaler her entire life, she was the center of every party or gathering.

Shortly after she graduated from high school she went to a dance with two young men. They got drunk and on the way home rolled the car. Mom broke her arm and in her words, it was the best thing that happened to her because the insurance settlement allowed her to go to beautician school. She was a beauty operator the rest of her life…

On December 7th, 1941, shortly after they heard the news about Pearl Harbor, my parents were involved in a head on car accident. They were both badly hurt. My father was unable to work and lost his job, and Mom was still in the hospital at Christmas. If she carried any long term trauma from that it never showed. When she talked about her life, she had a way of waving off adversity as just one of those things that happen. She would raise her right arm and give a dismissive flick of her wrist, as if indicating such events were no big deal. My father was drafted into the army when I was four months old. Mom told me the story of how she bundled me up, drove through a snowstorm to Fort Snelling where she dropped him off. I asked her what she was thinking that day, her husband going off to war and she alone with a newborn baby. She gave that cavalier flick of her wrist and said, “Oh, I don’t know, that’s just the way it was and everybody was doing it at the time.”

Helicopter parents is now a term for those who hover over their children. Mom was definitely on the opposite end of that spectrum. She found children, including her own, noisy and messy, and wasn’t particularly fond of having them around. But there never was any doubt she loved us, so it wasn’t a problem. And we did get a lot of freedom. When my dad was in the service Mom worked at a beauty shop in our small town. This was before such things as day care existed so she brought me, a baby, along to work. The beauty shop was housed in the same building as one of the town’s saloons. There was a hallway that connected the two businesses. After I learned to walk I began exploring. Soon I was spending my toddler days in the bar, tended to by the denizens of that establishment, the town drunks. Apparently it was a perfectly normal situation for my mother, the drunks, and myself. Much later in life, when she was quite elderly, Mom and I were talking. As a forward thinking person she seldom was in a reflective state. That day however, she was. There had been a story in the news about a lost child. An inattentive mother, she had lost me once when I was three years old. “You know,” she said, “when I look back, I don’t think I was a very good mother.” I don’t know if she expected me to protest but I agreed. “No, mom, you weren’t.” She thought about it for a moment, then gave that dismissive little flick of her wrist and said “Oh well.”

As a young child I was unusually quiet. My parents became concerned because I seldom spoke. It was surmised that perhaps I had a hearing problem. I was tested and the results came back normal. So my mother asked the doctor, “How come he never talks then?” The doctor replied, “Lady, maybe you never give him a chance.”

Until her health began to fail she charged through life at full speed. She had a lead foot when driving and was stopped a number of times for speeding. She somehow always managed to charm the officer and never got a ticket. When she cooked there was only one setting on the stove and that was high. She’d start cooking with the burner on high and then wander off to do something else. Kitchen fires were not an uncommon occurrence in our house. I now look upon it as a childhood lesson in learning not to panic.
After she retired she did volunteer work for the county. She was over eighty and still driving old people around for doctor appointments. In her eighties she developed stomach problems that troubled her the rest of her life. Even that she could make a joke about. “I’m ninety years old, and feel like I have morning sickness.” I took her to Mayo Clinic for an appointment. She requested I come along for her first consultation with a doctor. As he studied her medical records he started listing some possibilities, one of which was depression. At hearing this she brightened and said, “Depression?” I had to laugh, and said, “Mom, you want to be depressed?” She replied, “Well, I’ve always heard so much about it and wondered what it was like.” The doctor stared at her for a moment, then smiled. “Ma’am, I’ve known you for less than five minutes but I feel pretty safe ruling out depression.”

She spent the last six months of her life in a nursing home. Even there she was a favorite of the staff. A nurse’s aide was wearing a name tag and my mother recognized the last name. She told the aide that when she was young, she knew a man named Ray who had the same last name. The aide replied that was her grandfather. Mom said, “I liked him, he was really a good kisser.” Perhaps more information about her grandfather than the aide might have desired. To the end my mother managed to maintain, and display, her younger, vibrant self.

As I write these words I’m practicing social distancing due to COVID-19. When Mom was a child her whole household was quarantined because she had scarlet fever. They were confined to the house with maybe a radio but no TV, internet, Netflix, etc. A brother-in-law came to milk my grandfather’s cows so not to taint the milk. But I can’t imagine my grandfather didn’t sneak out of the house to do some chores. I worked on that same farm as a teenager. And right now as much as I enjoy Schitt’s Creek and the life, it would be a nice relief to go shovel some manure or slop some hogs. Another lesson I wish I could learn from my mother, how did they pass their time.

Lois Jenneke passed away at age 94. Miss you, Mom, the world misses you.