THIS DAY IN HISTORY… MARCH 29

1461 – Battle of Towton. A bloody, epic battle during the War of the Roses, which basically was a civil war over who should be king.

Henry VI was king and his cousin, Edward IV, wanted that title. Henry VI was reportedly a bit unhinged and the running of the kingdom was left to his wife. The battle, fought on Palm Sunday in a blizzard, included such weaponry as swords, shields, poleaxes, clubs, archery, and cavalry. Estimates range from 50,000 to 100,000 men engaged with 28,000 combatants left dead on the battlefield. The king’s forces were defeated and many of his noblemen fled the field. The king himself was found sitting under a tree, laughing and singing.

The War of the Roses was an inspiration of a number of Shakespeare’s plays and I suspect George Martin might have researched it for his “Game of Thrones.”

Directed by Billy Wilder and starring Marilyn Monroe, Tony Curtis, and Jack Lemmon, it is high on the list of funny movies. Curtis and Lemmon dress up as women and join an all-women’s band as they try to escape the mob after witnessing the Valentine’s Day Massacre. The movie ended with one of the funniest lines of dialogue of all time. The comedian Joe E. Brown had fallen in love with the “woman” played by Jack Lemmon. When Lemmon informs him they can’t get married because, well, Lemmon is a man, Brown pauses momentarily, then brightens and says, “Well, nobody’s perfect.”

Hail to Billy Wilder, if there is a better film director, I don’t know who it is. 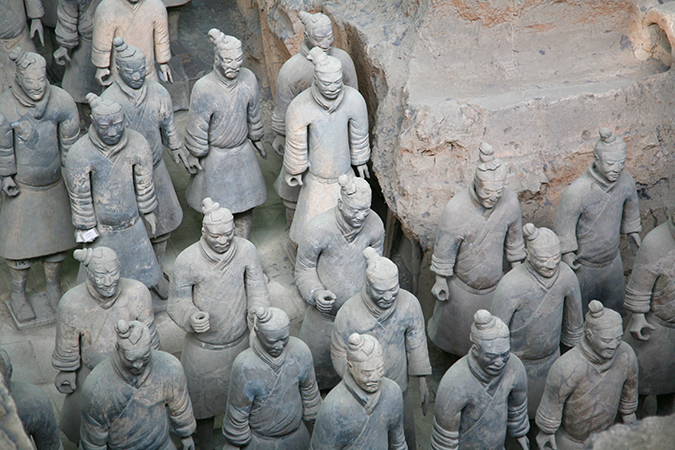 The first clay figure of a soldier was discovered by farmers digging a well in the Lintong District, not far from the city of Xi’an. The archeological dig continues with thousands of soldiers standing in rows in addition to chariots and horses already uncovered. From Wikipedia.org: “The construction of the tomb was described by historian Sima Qian (145–90 BCE) in his most noted work Shiji, written a century after the mausoleum’s completion. Work on the mausoleum began in 246 BCE soon after Emperor Qin (then aged 13) ascended the throne, and the project eventually involved 700,000 workers.”

I spent two weeks in Xi’an, China and while there visited the site of the Terracotta Army. Housed in a hangar-like structure, covering an area that seemed to be several football fields in size, the rows of soldiers could be viewed from elevated walkways. The spectacle left me in awe. There was a list of statistics involving artists, craftsmen, workers, kilns that while impressive, were just interesting. The how and why was less awe-inspiring than the mere fact of its existence. Quite obviously, I’m a history buff. For me, history is not only fun-filled facts and knowledge, it can also be textural. Even without physically touching, one can still touch and become part of a period past. People who had lived centuries before me had created this army, and it now connected me to them. Time became compressed and a dimension removed as I existed for a moment in a world not my current one. To me that’s the fascination of history. And for those who don’t share that fascination, it seems to me they are missing out on part of life.

It was his idea to drill for oil but unfortunately for him, he did not patent his design for the oil well. Ironically, he died in poverty after helping to launch the most profitable industry in the world.

Indirectly responsible for curtailing the whaling industry, his invention possibly saved those magnificent creatures from being hunted into extinction.

Until Secretariat’s Triple Crown run, considered to be the greatest racehorse ever. (I would put Seabiscuit in the running also.) Man ‘o War won 20 of 21 races and its loss, oddly enough, was to a horse named Upset. It once won a race by 100 lengths. In 1920 Man ‘o War and Babe Ruth shared the title of Athlete of the Year.

While the Babe was okay with this, Man ‘o War was reported to have been displeased at having to share the award. An anonymous source from the stable area leaked this information.

1937 – Billy Carter. Younger brother of President Jimmy Carter. Founder of “Billy Beer,” his antics, alcoholism, and colorful one-liners kept him in the spotlight.

One example, from PBS.org: “My mother went into the Peace Corps when she was sixty-eight. My one sister is a motorcycle freak, my other sister is a Holy Roller evangelist and my brother is running for president. I’m the only sane one in the family.”

It can’t be easy being the sibling of a President. Billy made the best, and worst, of it.

* Lead-In Image – Phil MacD Photography / Shutterstock.com – “Distant silhuoette of a lone tree in a ploughed field at the site of the Battle of Towton (fought during the English Wars of the Roses on 29 March 1461).”

* “Some Like It Hot” Trailer (video clip) – Movieclips Trailers / YouTube.com