THIS DAY IN HISTORY… MAY 11

Constantine the Great, Roman Emperor, moved the capital from Rome to an ancient city he renamed after himself. Constantinople flourished from the 5th through the 13th centuries as the wealthiest and most prominent city in the world. It stood between two continents, Europe and Asia, and two seas, the Black and Mediterranean. Built as a fortress, it remained impregnable for 900 years before crusaders from the 4th Crusade conquered and sacked the city. Roman rule lasted only decades before the Ottomans captured the city and created their own empire with Constantinople again as a capital.

I had assumed the capital of the Roman Empire was always Rome. That’s why I find history so fascinating, there’s always something new to be learned from the old.

Established as a territory in 1849, Minnesota became the 32nd state in 1858. Its fertile plains and abundant forests attracted settlers and the population rose from 6,000 in 1850 to 150,000 in 1857. The bill to admit Minnesota was stalled in Congress for several months because some southern states opposed adding another “free” state.

Quiz time. What president signed the bill admitting Minnesota to the Union?

Answer at the end.

The Pullman Company made sleeping cars for railroad travel. They were manufactured in a company owned town just outside Chicago. The working conditions there were already hard when the company, due to the economic turndown of 1893, trying to maximize profits cut the workforce and reduced wages by 25%. There was not a corresponding reduction of rents in company-owned housing or prices at company-owned stores. The Pullman workers went on strike. The American Railroad Union, ARU, supported the strike by refusing to hook up Pullman cars to trains, or stopping any trains pulling a Pullman car. More and more railroad workers joined the strike and by the end of June, 125,000 on 29 railroads had walked off the job. Railroad travel throughout the nation was crippled. The strikers offered to allow trains to run as long as a Pullman car was not attached. That offer was ignored.

Eugene Debs was president of the ARU and fearing violence, urged calm. The strikers, however, were growing more angry and at one gathering burned some buildings and derailed a locomotive. The locomotive was pulling a train that had a U.S. postal car attached. That allowed the federal authorities to act. There were a number of fervent anti-unionists on President Grover Cleveland’s cabinet, and at their urging he sent federal troops to Chicago to break the strike. By this time the strike had grown to a quarter of a million workers. On July 7th there were violent confrontations between strikers and soldiers in and around Chicago. Around thirty people died, and another four soldiers died in California when a railroad trestle was dynamited.

Partly because of the violence and also because goods and farm produce wasn’t moving, public sentiment turned against the strikers. The strike broken, it ended on July 20th. However, there were a few concessions made to the workers. The town of Pullman was forced to disband as a company town, and a national holiday, Labor Day, was created in honor of workers. Eugene Debs was jailed for his role in the strike and by the time he was released his political views had shifted, moving him toward the Socialist power he would become.

It was a classic confrontation, workers fighting for rights and dignity, and wealthy owners fighting for control and profit. Starting with the strikes of the late 19th century such as the Pullman, through the epic battles of the 1930s, unions gained a foothold in America, helping create a strong middle class. The pendulum has now swung in the opposite direction with unions being marginalized, and the middle class now relies on the trickle-down theory for economic survival.

Conductor, composer, resistance fighter. Born in Holland to a musical family, van Gilse studied music under Engelbert Humperdinck in Berlin, then conducted orchestras in Bremen, Munich, and Amsterdam. He left Germany when the Nazis rose to power. After the war started, the Germans ordered all his music destroyed, but collaborators hid it. Along with his two sons, he went underground to fight the Nazis. His sons were captured and executed, and van Gilse died of pneumonia in 1944. He was buried in secret, so the Nazis couldn’t desecrate his grave site.

I have a fascination with the resistance fighters of WWII. The incredible courage it took knowing they were facing certain torture and death if captured.

Writer. Born in the Sandhills region of Nebraska, Sandoz wrote of pioneer life. She lived a hard existence of low paying jobs, a bad marriage and divorce, even malnutrition, but she continued to write. She accumulated over a thousand rejection slips before a publisher agreed to accept her work. Sandoz wrote about the Great Plains and the hardships of the people living there, both white and Native American. Based on this excerpt from MariSandoz.org, she was also ahead of her times: “Published long before most Americans were ready to listen, two books about American Indians, Cheyenne Autumn and Crazy Horse, give Sandoz’s impassioned view of the persecution of the northern Cheyenne and Oglala Sioux and of the near destruction of their culture. Her writing champions the worth of the Native American, the need for just laws, and the role of government aid.”

More books added to my already too long reading list.

Entrepreneur, pilot. Cochran was the first woman to break the sound barrier. She claimed to be an orphan, so as to hide her past, although she kept in touch with her real family her whole life. Born in Florida, she was working in a cotton mill at age 10, married at 13 to a man named Cochran, and had a child at 14. The child died at age 5 and Cochran divorced her husband. She worked in beauty salons, moved to New York City, worked in the fashionable salons on 5th Avenue and then started her own line of cosmetics. She successfully competed with the big time houses of Helena Rubenstein and Elizabeth Arden. It was at this time she took flying lessons, and received her pilot’s license in just three weeks. Cochran began flying around the country to promote her business, and also began to set speed records.

In 1939, when war broke out in Europe, Cochran wrote to First Lady Eleanor Roosevelt suggesting a a women’s auxiliary air force. That idea became reality after America entered the war. Cochran commanded a force of almost 1,100 women who ferried all types of aircraft from factories and bases to wherever they were needed to support the war effort. In 1953, encouraged by her lifelong friend, Chuck Yeager, Cochran became the first woman to break the sound barrier. She remained in the the Air Force until 1970, retiring as a colonel. In 1980 she still held more records for speed, altitude, and distance than any other pilot, man or woman.

ANSWER TO THE QUIZ 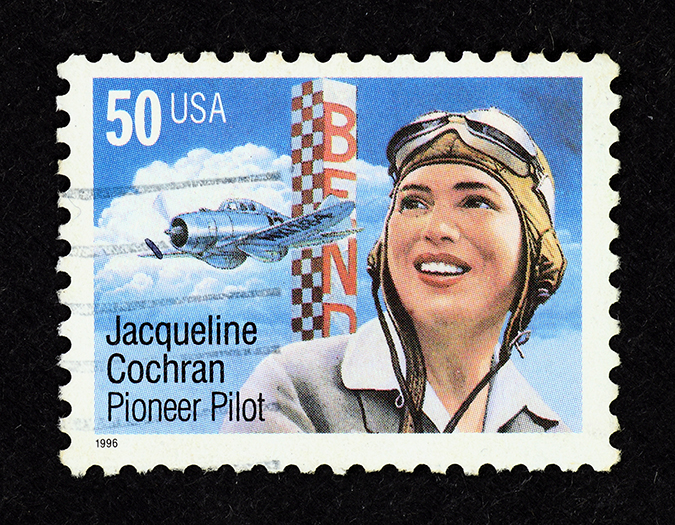