THIS DAY IN HISTORY… MAY 27

This was the 2nd outbreak of the disease and was contained more efficiently than the deadly 1900-02 outbreak. That one, centered in Chinatown, spread because of the denial of California Governor Henry Gage. He refused to listen to the advice of one of the nation’s leading epidemiologists, Dr. Joseph Kinyoun, because of what it might do to the state’s economy. In an address to the California legislature Gage attacked Kinyoun and said “Plague fakers” were casting a shadow on California. Besides the plague deniers, there was also the thought that if it did exist, it affected only a vulnerable population, the Chinese, so it did not justify a radical reaction such as a quarantine. The situation was finally addressed when other states threatened to stop doing business with California. The second outbreak in 1907 was dealt with quickly, based on what was learned from the first. Also most of the victims of the second one were white.

Any of this sound familiar? I wonder if they called the first outbreak the “Chinese Plague”?

In a massive and miraculous boat lift, 338,000 British and French troops were evacuated from the beaches of Dunkirk, France and brought to England. What isn’t as well known is that some had to stay behind, fighting a rear guard action to protect those on the beaches. The Royal Norfolk Regiment was battling a fanatical SS regiment. Ninety-nine “Norfolks” became separated from their regiment in the fighting. The British soldiers ran out of ammunition and were forced to surrender. German SS officer Fritz Knoechlein had them lined up against a barn, set up two machine guns and the massacre commenced. Two British soldiers, playing dead, survived. They were first cared for by a French couple, then captured by the regular Germany army, the Wehrmacht, and became POWs. One was badly injured and the Germans returned him to the English. The other spent five years in POW camps and survived to the end of the war and testified in the trial of Fritz Knoechlein who was executed for his crime in 1949.

Dunkirk has always been heralded as a miracle that helped save England. But I’ve often wondered about those luckless few who were left behind to protect the masses who escaped. That was one tough short straw they drew.

Heydrich was a ruthless top Nazi official who helped script the Final Solution. His nickname was “The Butcher,” and his goal was to exterminate all Jews in Nazi occupied territories. He was stationed in Prague, Czechoslovakia when the assassination attempt, named Operation Anthropoid, was launched. A handful of Czech resistance fighters were airlifted from London and parachuted into their home country. Heydrich was riding in a car with an open roof in Prague when the attack took place. A bomb was thrown, missing going into the open car, but still severely wounding Heydrich. Nevertheless, he chased after his attackers but they escaped. A massive manhunt and reprisals followed. Hitler was enraged and ordered 10,000 Czechs to be executed. He was talked down from that number but the retaliation was still severe with whole villages being wiped out. Heydrich lived until June 4th when he succumbed to his wounds. All the attackers were tracked down and died, either shot or by their own hand. 13,000 Czechs were jailed and over 5,000 murdered as a result of this attack.

The harsh reprisal tactic apparently worked for this was the only assassination attempt by the Allies on a Nazi official during the war.

Pianist and composer. Born in Glenwood, Minnesota, Dougherty went to the University of Minnesota to study music, won a Schubert Prize for piano competition, and used the scholarship money to attend Juilliard School. He lived in New York City for fifty years and in that time composed over 200 songs. He also toured as an accompanist to a number of singers including Marian Anderson. (That alone is impressive.) In the early 1930s he was part of an artist colony that included such names as Thornton Wilder and Edward G. Robinson. He continued to compose songs until the 1960s when he retired. Dougherty passed away in 1986.

Not bad for a kid from a small town in Minnesota. One reason I included in today’s post is I spent six years of my childhood in that same small town. I can’t say that I remember any Dougherty’s though.

Politician. This is from Wikipedia.org: “Kissinger remains a controversial and polarizing figure in American politics, both condemned as an alleged war criminal by many journalists, political activists, and human rights lawyers, as well as venerated as a highly effective U.S. Secretary of State by many prominent international relations scholars.”

That pretty much says it all.

May 27th was a good day for writers to be born. I’ve read at least one book by all of them. While all are talented and have interesting aspects of their writing, the books I found the most enjoyable were the novels of Herman Wouk.

* Lead-In Image (sunset art)  – Everett Historical / Shutterstock.com – “Military evacuation of Dunkirk during World War 2. Thousands of British and French troops wait on the dunes of Dunkirk beach for transport to England. May 26-June 4, 1940.” 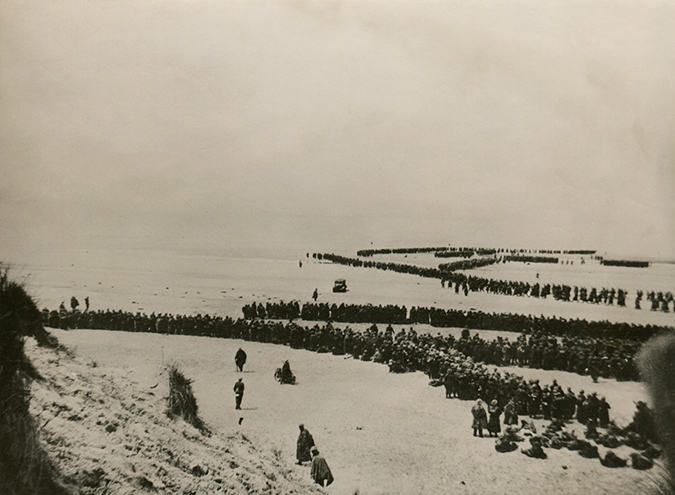