THIS DAY IN HISTORY… MAY 2

I hope he then became referred to as the Duke. It has to be unsettling to the populace to have a ruler known as Otto the Merry.

Russian forces take Berlin in the last major battle of WWII. The Russian Army lost 30,000 and the Germans 12,000. Stalin’s goal was to push westward as far as possible in order to retain that land when the war ended. Eisenhower did not advance on Berlin because he was trying to avoid sustaining more casualties, and he was wisely concerned about combat between American and Russian units if they entered the city at the same time. Russian officers allowed their soldiers to go on a drunken rampage after Berlin surrendered, with widespread rape and looting.

The civilians of the Fatherland suffered payback for the killing and carnage the German army had spread across Russia. Anybody who advocates war as a solution, and is willing to accept a certain amount of military losses, should study what it does to a civilian population.

Mine That Bird, at 50-1 odds, with Calvin Borel riding, swept down along the rail on a muddy track and surprised the 153,000 in attendance by winning. It was the second biggest upset in Kentucky Derby history.

I was one of the 153,000 that day. Quite a memorable experience. When the horses parade onto the track with a band playing “My Old Kentucky Home” and 150,000 people are singing along, if you don’t feel something you don’t have a heart. The day is one third horse racing, one third fashion show, and one third binge drinking. I had one mint julep and that was enough. There were some people who thought the purpose of the event was to see how many they could consume.

It had rained hard overnight and the sky was cloudy but the rain held off during the day. Our seats were pretty good, part way down the stretch run. The crowd was predominantly white and those around us were mostly Kentuckians. There was a middle-aged black couple sitting directly behind me and the mother of one of them was along. She must have been eighty-five years old and looked a bit bewildered at the size of the crowd and the noise. During the course of the day I talked to them and learned that despite having lived in Louisville her whole life, this was her first Kentucky Derby. Her kids wanted her to see it. Also near us were some drunks. White, male, mid-forties loudmouths who were devouring mint juleps like they were M&M’s. Based on their accents they were locals. They had the comportment of successful men and acted like the day was as much about them as the horses.

Everybody was on their feet as the “most exciting two minutes in sports” approached. Not only on their feet but standing on the seats, the benches. I got up on the bench to watch. Then I looked behind me and with a sinking heart realized the very small elderly woman would not be able to see anything. I joined her daughter in trying to convince her to stand on the bench. I said I’d help support her. Too frail, too wobbly, she shook her head. Then the loudmouth drunks saw what was happening and took over in a way I never could have. This was their place, their scene.

“Hey,” one of them shouted, “Grandma’s gonna see the Kentucky Derby.” That became their rallying cry as they, while gently supporting her, bulldozed their way through the crowd. Four large white men forming a protective cordon around an elderly African-American woman. They got her down to the rail where she had a clear view of Mine That Bird winning the race. When she returned to her seat her eyes were shining with excitement.

Every once in a while I believe in the world.

Major in the British Army who was complicit with Benedict Arnold’s traitorous plan to turn Fort West Point over to the British. Arnold escaped capture, Andre did not. General Washington had him executed as a spy on October 2nd, 1780.

More often than not spies and traitors come to no good end.

1779 – John Galt. English writer. According to Wikipedia: “John Galt was a Scottish novelist, entrepreneur, and political and social commentator. Because he was the first novelist to deal with issues of the Industrial Revolution, he has been called the first political novelist in the English language.”

Not to be confused with John Galt, the protagonist of Ayn Rand’s Atlas Shrugged.

Having read neither John Galt nor Ayn Rand I don’t know if there’s a connection between John Galt the writer and John Galt the fictional character. Perhaps I should put both authors on my reading list.

Baby doctor who revolutionized the care of infants. He became controversial when he joined the throngs of young people protesting the Vietnam War. Some correlated his permissive child-rearing advice with the legions of spoiled, undisciplined protestors filling the streets. He countered that he was merely being attacked for his left-leaning politics.

Not being into either babies or war, I stayed out of that argument.

* Lead-In Image  –  Everett – Art / Shutterstock.com – “World War 2, Battle of Berlin, May 1945. Two elderly German men, one wearing the armband signifying blindness, the other his helper, sitting on a crate amid the rubble. Photo by Yevgeny Khaldei.” 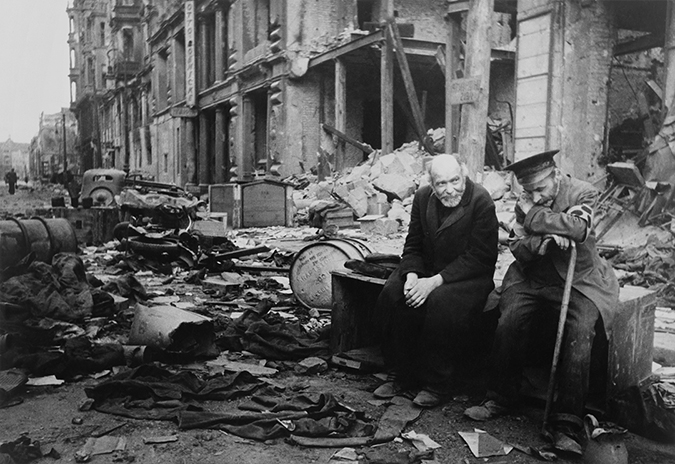