THIS DAY IN HISTORY… NOVEMBER 11

Earlier in the year Congress had passed an act enabling Washington, South Dakota, North Dakota and Montana territories the right to seek statehood. After approving a state constitution Washington was admitted to the Union. Washington is the only state to be named after a president. Originally it was to be called Columbia, but a senator from Kentucky objected because he though there would be confusion because of the similarity with the District of Columbia, so instead it was named Washington.

Which would never be confused with Washington, D.C.

On the eleventh hour of the eleventh day of the eleventh month, the fighting in the First World War came to a stop. The war to end all wars, the war that claimed the lives of millions, finally ground to a halt. All sides knew what time armed conflict was to end, and at the prescribed hour, all sides abided by it and the guns fell silent. Before that moment however, as if enough carnage hadn’t taken place, fighting continued that entire morning. Maybe thinking another hundred yards of battle-weary landscape mattered, commanders ordered more attacks. Officers, more than likely with future promotions in mind, were eager to fill their resumes with battle experience. In the last six hours before the armistice came into effect, 2,735 soldiers died.

On May 20th, 1920, fifteen veterans in Lester Prairie, Minnesota chartered Ray Kirkpatrick Legion Post 453. The post is still in existence today and it was thriving in the 1950s when I was a kid. My father was a member and the club held events year round, including marching in the Memorial Day parade. I never gave much thought to the name, Ray Kirkpatrick, other than it was a bit odd in a town where almost everyone had a German surname. If he had any relatives living in the area, I didn’t know of them. Later, when I became curious, I was unable to unearth little about the man. What I do know is the local legion post is named after him because he died in France during WWI. He died 11/11/18, one of the 2,735 killed the last morning of the war. Is the thought of his death more sickening than someone who died in the trenches in 1915 or 1916? I don’t know, to me that whole was was useless and unnecessary.

But to be sent into battle, to die, when everybody knows peace is only hours away. Because some officer wants to earn gold bars. In my world those officers would have been charged with a crime rather than given a promotion.

This was a storm of immense ferocity that swept across the Midwest. People had been lulled by the unusually warm autumn and the day started off balmy. Temperature were near sixty degrees in much of the area. Duck hunters took advantage of the mild weather, descending on swamps, lakes and rivers. Hunting was good, some reported later that never had they seen so many ducks. Probably sensing the approaching storm, flocks of ducks were on the move. The weather quickly began to change. The wind picked up and it began to rain. The rain turned to sleet, and then into heavy snow. Because of the mild start to the day many of the hunters were inadequately dressed. Visibility was reduced to zero there were gales of 70-80 miles per hour. Over Lake Superior it was estimated the winds were even stronger. In hours temperatures plummeted down to single digits. Duck boats were swamped and hunters drowned or were frozen to death. The apple crop in Iowa was destroyed, there were snow drifts of twenty feet, cars were buried, passenger trains stranded, three ships were lost on the Great Lakes and many more run aground, and cows and horses froze in the fields. The human death toll was 145, most of them duck hunters or sailors, as the storm cut a 1,000 mile wide swath through the Midwest. One effect of the storm was a change in weather forecasting with it becoming more regionally-located.

My parents were newlyweds living in Danube, Minnesota at the time of the storm. My mother at first thought it great fun and insisted they go out into it. They walked to a local bowling alley but soon realized the seriousness of the storm. It was a struggle against fierce wind and blinding snow to make it back to their rented house. Even inside they weren’t warm and comfortable. Snow was blowing in through cracks and from under the doors. My father stuffed rags into various opening to keep the snow from entering. For those alive at the time it was one of those signature moments in life. One Christmas I bought my parents a book called “All Hell Broke Loose.” Minnesotans gave their personal narratives of their experiences that day. Neither of my parents were avid readers but they devoured that book. One of those rare times in life where I found the perfect gift.

Movie producer. Spiegel was producer for such blockbuster movies as “The African Queen,” “On the Waterfront,” “The Bridge on the River Kwai,” and “Lawrence of Arabia.” His movies won the Academy Award for Best Picture three times. He also had a less admirable side. In Hollywood he gained he nickname the Velvet Octopus because of his approach to women, including underage girls. Sixteen-year-old actress Theresa Russell said she was propositioned by Spiegel and when she rebuffed him, he threatened he could keep her from working in Hollywood. From Wikipedia: “In a review in Variety of a Natasha Fraser-Cavassoni’s biography of Spiegel, Wendy Smith notes: ‘It’s all here: the sleazy financial maneuvers and creepy taste for underage girls that make Spiegel a decidedly flawed protagonist, as well as the wit, sophistication, and Old World charm that make him a titanic figure the likes of which the movie industry will not see again.’”

That’s a relief, knowing sexual impropriety in Hollywood is a thing of the past.

Comedian. The word “comic” is inadequate in describing Winters. He did wildly inventive improvisational sketches complete with rubber-faced expression and sound effects. Winters said that as a boy in Dayton, Ohio, his parents didn’t understand him and he didn’t understand them, so he spent his time alone in his room inventing characters and interviewing himself. He dropped out of school in 1943, joined the Marine Corps, and spent two and a half years in the South Pacific as a gunner aboard the carrier, Bon Homme Richard.

He began his career as a morning disc jockey in Dayton. Unable to attract guests to his show he began to make them up. Winters said of that time, “I’d make up people like Dr. Hardbody of the Atomic Energy Commission, or an Englishman whose blimp had crash-landed in Dayton.” In 1953 he moved to New York City and quickly found work as a stand-up comic. Soon he was appearing on the shows of Jack Paar and Steve Allen and both let him do what he wanted. Winters created such characters as Maude Frickert, B.B. Bindlestiff, Lance Loveguard, and Piggy Bladder, football coach for the State Teachers’ Animal Husbandry Institute for the Blind.

Winters was an inspiration for Robin Williams, who openly admired him. Although appreciated, Winters’ career was never wildly successful, probably due to an inability to characterize or pigeon-hole him. The world lost this comic genius in 2013.

If a funnier person has ever walked the face of this earth I don’t know who it would be.

* Lead-In Image (Enola Gay) –  Everett Historical / Shutterstock.com – “At least sixteen soldiers in a car after being mustered out at Camp Dix, New Jersey, after the Nov. 11, 1918 Armistice ended WWI.” 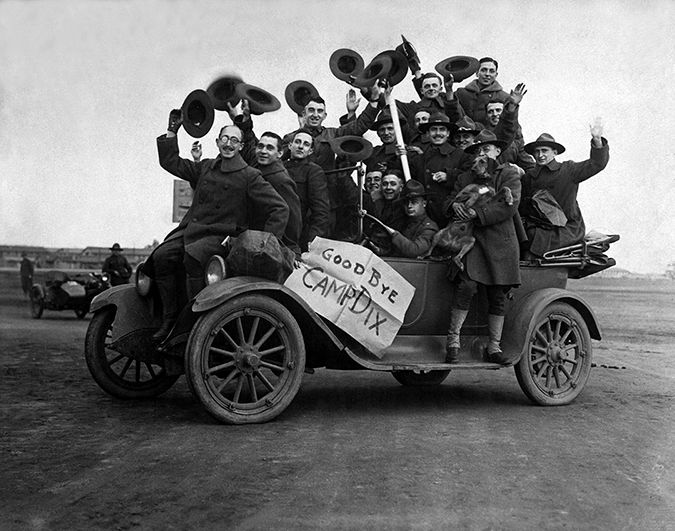