THIS DAY IN HISTORY… NOVEMBER 16

Spanish conquistador Francisco Pizarro led a force of 180 men. On that day Inca ruler Atahualpa had an army of 80,000 warriors. So Pizarro resorted to subterfuge. He invited the Inca chief to the public plaza in the town of Cajamarca for a parlay. Overconfident, and believing to be on a peaceful mission, the Incas left their weapons behind as a retinue of 7,000 men, with Atahualpa borne on a litter, entered the square. Pizarro had hidden his men, along with cannons, in buildings surrounding the square. They opened fire on the unsuspecting and tightly packed Incas. Then Spaniards on horseback charged the panicked and fleeing Incas. Atahualpa was captured and all resistance ceased.

Demoralized by the defeat of their spiritual leader, Atahualpa’s army disintegrated and fled. In one bold and devious stroke Pizarro conquered the Incas. Atahualpa was eventually executed and Pizarro took his ten-year-old wife as his mistress.

I may have to do more reading on this subject because the broad details defy belief. Among those are 80,000 versus 180, and a ten-year-old wife and mistress.

Ivan, although a reformer at first, had an unstable personality and was given to fits of rage. During one of these outbursts he allegedly struck his oldest son and killed him. There is a famous painting by Russian artist Repin depicting this event. It has been called Russia’s most famous painting. Strangely it has been vandalized twice, once in 1913 and again in 2018.

I guess you don’t get called Ivan the Terrible for nothing, and even the painting doesn’t have good karma surrounding it.

Alcatraz’s most famous prisoner, and arguably America’s most famous gangster, was set free on this date. The reason for his early release was that his mental and physical condition had deteriorated badly due to a syphilis infection.

Although a gangster, Capone gained public popularity as a sort of modern day Robin Hood because he started free soup kitchens for the poor. However, then a popular, young prosecutor was murdered and public sentiment turned against Capone, as many believed he was responsible. Despite his criminal excesses, he was ultimately imprisoned for tax evasion, receiving an eleven-year sentence. After his release Capone lived until 1947 before he succumbed to syphilis.

In the rural town of Plainfield, Wisconsin, Ed Gein killed his last victim, Bernice Worden. Gein, a recluse farmer, was considered odd, and for that reason investigators went to his farm. Grisly is a weak adjective for what they found. Not only was he a killer but Gein was also a grave robber, having brought women’s bodies to his farm. He not only engaged in cannibalism; body parts were also used as decorations.

It became a nationwide horror story that dwarfed anything the tabloids or Hollywood could make up. Although Hollywood did take notice. Gein was said to be the inspiration for Norman Bates in “Psycho” and maybe even the killer in “Silence of the Lambs.” Gein was declared insane and spent the rest of his life in an asylum where he died in 1984.

I, as a kid at the time, remember the Ed Gein story swamping all other news. It took place in the Upper Midwest, part of us, but far enough away so there was no fear. Instead, especially among the adolescent set, there was a lot of really bad and inappropriate jokes. By the holidays of that year there was already a parody set to “Twas The Night Before Christmas.” Even after all these years I remember some of the lines, but I think I’ll exhibit a rare bit of good taste and not commit them to print.

Humorist, drama critic, theater director, and playwright. Kaufman successfully collaborated with some of the more notable names on Broadway including Moss Hart, George Gershwin, and the Marx Brothers. A keen wit, he was also a member of the Algonquin Round Table, a collection of writers and celebrities that met at the Algonquin Hotel in Manhattan.

He started off as a drama critic and a press agent asked him what it would take to get the name of an actress he represented in the newspaper. Kaufman replied, “Shoot her.” Another time, watching the Marx Brothers, who had a tendency to improvise, rehearse a play he had written, he stood up and loudly declared, “There! There’s a line I wrote!” His first play in 1918, during the flu epidemic, was a flop and ran for only thirty-two performances. People at the time were advised to stay away from large crowds as a way to avoid the flu. Kaufman commented that could be achieved by attending his play.

Kaufman was on a panel TV show in the early 50s but was dismissed due to public outcry for making a caustic remark about the overplaying of “Silent Night” during the Christmas season. Humorist Fred Allen noted, “There are only two wits on television, Groucho Marx and George Kaufman. Without George Kaufman television has reverted to being half-witted.”

With the advent and popularity of the so-called reality shows, television has certainly retained its half-witted status ever since.

Fibber McGee. Along with his real life wife, Jordan was part of the popular radio comedy show, “Fibber McGee and Molly.” The show ran on NBC radio from 1935 to 1957 and was the top-rated show in the country seven times.

I only heard the show a couple of times, replays on a college radio show in the 60s. The one I remember is Fibber had driven over a manhole cover and it had bounced loose and was lying on the road. He drove back and picked it up, thinking it was a part that had fallen off his car. The show was Fibber and his neighbors trying to figure out how to fit the manhole cover back into the car. Simple humor, and although both types worked, quite different than the humor George Kaufman employed. 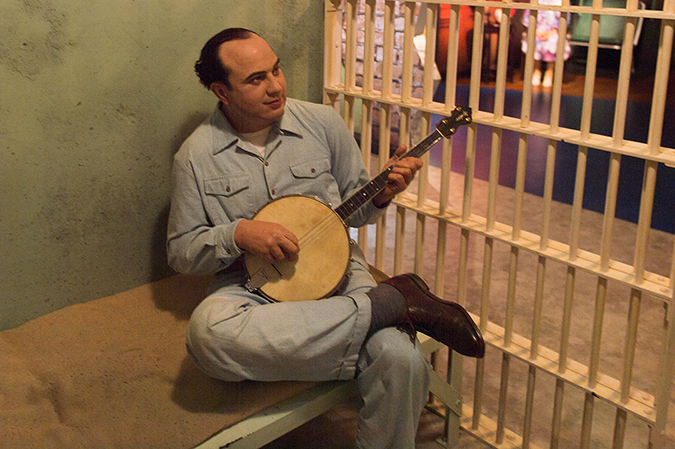