THIS DAY IN HISTORY… NOVEMBER 5

With General Leonard Wood, U.S. military governor of Cuba presiding, the constitutional convention convened. The thirty-one delegates were charged with writing a constitution for Cuba that was favorable to the United States. The U.S. was not happy when it was not mentioned in the first draft. Exerting its influence, the U.S. managed to get the convention to include language from a U.S. statute, the Platt Amendment, that placed limitations on Cuban sovereignty and provided a legal basis for future U.S. military interventions in Cuba.

It seems that many in the U.S. government believe the Platt Amendment is still relevant and should be acted upon.

How did this come to be? Simple enough.

So there you go, Britain was left with no other option.

To me, in retrospect, he was the right man in troubled times, and I think he did a great job. Although now I am definitely in favor of term limits, not just for the President but also the House and Senate. One six-year term for president as a start. Perhaps that would stop the governing with an eye on re-election and do away with long-term career politicians. Naïve assumption, I am sure, and there would be the inevitable unintended consequences, but it isn’t like it is working all that well now.

From History.com: “Labor organizer and socialist leader began his rise to prominence in Indiana’s Terre Haute lodge of the Brotherhood of Locomotive Firemen. Debs organized the American Railway Union, which waged a strike against the Pullman Company of Chicago in 1894. After embracing socialism, he became the Socialist Party’s standard-bearer in five presidential elections.” And from https://www.marxists.org/archive/debs/ “Debs received his highest popular vote—about 915,000 (6%) from within a prison cell. He had been arrested for “sedition” because he opposed World War I. Many Socialists were imprisoned during this time because they felt that the war was being fought for the profits of the rich, but with the blood of the poor.”

The basis for war being money? Perish the thought! That would be like thinking the U.S. 2003 invasion of Iraq had something to do with oil.

He was called one of the last of the old-time tough hard-nosed union leaders.  In 1970 he led an eight day strike of 200,000 postal workers.

Mid-1970s, 3am, an all-night truck stop café in Wisconsin. I was with my friend, Tump, and Scott, a guy we had met drinking in a bar in Bloomer. Scott was an Air Force pilot, home on leave. He had flown in Vietnam, although not combat missions. The parking lot was full of trucks, yet the restaurant was eerily empty. There was the rumble of Harleys outside and minutes later two bikers entered. Both bearded with long hair, one was big and burly and walked with a belligerent swagger. The other, ten years older, thin, seemed to be existing in another dimension. They sat down in a booth across the aisle from us and began perusing the menus. Then the big guy took the menu and blew his nose between its laminated pages. Perhaps a more sane man than I would have averted his eyes. He caught me looking at him.

“Got a problem?” His glare was a hostile challenge.

I gave an indifferent shrug of one shoulder and said, “Just admiring your style, man.”

And with that I saved my life and made a new friend. Will joined our booth and left Kenny alone in his own world. Will, from Chicago, was on an alcohol-fueled ride across Wisconsin, trying to outdistance demons unleashed during his tour in Vietnam.

We learned there was a truckers’ strike going on outside and decided to join it. Truckers were lined up blocking a road, state troopers were arriving to face off against them. Kenny talked into the air vent of a truck, asking where it had been, then put his ear to the vent and nodded at the reply. Sunrise lightened the morning darkness. Birds sang in treetops. Police bullhorns issued threats. Will was ready to rumble. Kenny remained in his own world. Scott seemed to have discovered a rebellious streak that had lain dormant under years of military discipline. Tump and I, always in search of a good story, had found our moment. The situation grew more tense.

Then a waitress marched out of the restaurant, between the two lines of men.

“Is there somebody named Scott here?” She yelled out.

“Your mother’s on the phone, she’s wondering where you are, wants to talk to you.”

Scott was stunned, and humiliated. This didn’t happen to Air Force pilots. The moment was over, at least for our little group. Scott, rebellious spirit broken, dutifully followed the waitress back into the café. Will and Kenny roared off into the unknown, demons still in pursuit. And Tump and I wandered off in search of another moment.

Not exactly like the Wobblies facing off against the Pinkertons, but that was my time on the picket line.

I watched “A Shot in the Dark” in a foreign language and because of its wonderfully visual humor, still enjoyed it. 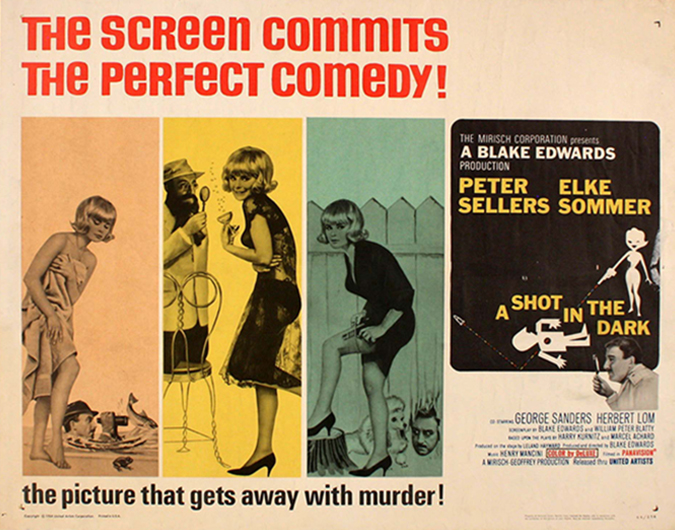