NewsWhistle is pleased to feature Gary Jenneke’s “This Day In History” column.You can read the original at Gary’s THIS DAY IN HISTORY blog — or scroll down to enjoy Gary’s unique look at life’s comings and goings.

THIS DAY IN HISTORY… NOVEMBER 6

Gandhi had founded a newspaper to spread the idea of passive resistance to gain rights for people of color in the African nation. He also led protests against laws specifically aimed at suppressing Indians living in South Africa. He was leading a march protesting the Indian Relief Bill, which levied a tax on Indians, when he was arrested. Released, he immediately rejoined the march and was arrested again. The Indian Relief Bill was eventually rescinded. Gandhi returned to India and after years of passive resistance against British rule, helped lead his country to independence.

The world today still is in need of Gandhi-type leadership rather than the suicide vest mentality. Although authority’s rejection of the former probably has led to the existence of the latter.

In a landslide victory Hoover defeated New York governor Al Smith. He accumulated 444 electoral votes to Smith’s 87 and had a popular vote margin of 58% to 41%. This election marked the Republicans’ third straight landslide victory. Hoover, aided by a booming economy, was the first president born west of the Mississippi River. Smith, a Catholic, was hurt by anti-Catholic sentiment and also his stance against Prohibition. At the time many in America believed the Catholic Church was un-American and that it opposed freedom and democracy. The fear was Smith would be taking his orders from the Pope. Hoover’s term included the stock market crash of 1929 and the beginning of the Great Depression. In 1932 he was defeated for a second term by Franklin Roosevelt.

The anti-Catholic prejudice still existed in 1960 when John Kennedy ran but was less virulent. My hometown was a conservative stronghold and when JFK was elected, I remember the joke going around. “Our motto used to be ‘In God We Trust,’ now it’s ‘In The Pope We Hope.’”

This was an operation in Krakow where all the leading professors of a prominent university were arrested by the Nazis occupying Poland. They had gathered in an assembly hall under a ruse that they were to attend a lecture. 184 professors, other staff, and a few students were arrested and deported. They eventually ended up in Dachau concentration camp. International protest, including that of Mussolini and the Vatican, called for their release. By early 1941, Germany released most of the educators. However, twelve had died, unable to survive the harsh conditions of Dachau, and three Jewish professors had been murdered. After their release, back in Poland, in defiance of the Germans, they organized an underground university. Among the students they taught was Karol Wojtyla, who later became Pope John Paul II.

Academia under assault. Why? Because for a totalitarian regime education is always dangerous. It builds a foundation of challenge against their “truths.” Society’s welfare is always at risk when facts and science are being debunked.

Composer and conductor. King of the Marches, some of which endure to this day, such as “Stars and Stripes Forever.” Sousa was in the Marine Corps, conducting its band, and later in civilian life formed his own band that played throughout the nation, 15,623 concerts in all. Sousa composed 137 marches during his lifetime. He died in 1932 at age 77.

Entertainment did not come via electronics during Sousa’s era. There was more dependence on one another. In digging into the history of my hometown in the early part of the 20th century I was amazed at the number of bands in town. The volunteer fire department had a band, the amateur baseball team had a band, and there were others as well. Maybe it was a way of raising money. I’m sure they were all playing Sousa’s marches. In the photos I’ve seen of these bands the members all look happy, satisfied. Probably from a sense of community.

Baseball pitcher. “The Big Train” was one of the greatest major league pitchers ever. He had 417 wins, 110 shutouts, and completed 531 out of the 666 games he started. His fastball was legendary. The great Ty Cobb, upon facing him for the first time, said it best, even poetically: “His fastball hissed with danger.”

As a kid, reading a sports book, I came across this story about Walter Johnson. He played before the onset of night baseball and games had to be completed before darkness fell. One such game was at dusk with Johnson pitching. The opponents complained it was too dark to play. The umpire wanted to have the last couple of outs recorded and the game completed. Johnson wound up and threw. The umpire called “Strike!” The batter looked back and said, “I don’t know, ump, sounded kinda high to me.”

Musician. Frey was co-founder and member of the rock band, the Eagles. The four members of the Eagles started as a back-up band for Linda Ronstadt on a tour. When that tour ended they formed the Eagles. Frey knew Jackson Browne and Browne shared with him a song he was working on but hadn’t gotten around to completing. Frey really liked it and asked if he could finish it, Browne eventually agreed and that’s how “Take It Easy” came to be. The song took them to the top of the charts where they would remain as a successful rock band with a string of other hits. Frey died in 2016 from intestinal complications developed from taking medications for rheumatoid arthritis.

“Well, I’m a standin’ on a corner in Winslow, Arizona

Such a fine sight to see

It’s a girl, my Lord, in a flatbed Ford

Slowin’ down to take a look at me.”

About the same time the song was coming out I was hitchhiking across Utah. A ride let me off on an isolated stretch of two-lane blacktop surrounded by a barren landscape. No town, just a t-road with my ride going one direction, me the other. Cars zoomed past, not slowed by my outstretched thumb. Another hitchhiker was let off, a lanky hippie with a scraggly beard and long, dishwater blonde hair. Rather than compete we decided to hitchhike together. A bit of comfort for both of us for night was beginning to descend on the desert. Way down the road we could see the neon lights of a building, a bar maybe. A refuge? Then a pickup came careening down the two-lane highway. Three cowboys in the cab and two standing in the bed in the back. Obscenities were shouted and an empty bottle thrown in our direction. I said, “They’re on their way to the bar, what they going to be like when they come back?”

“This isn’t good,” the hippie said.

Passing cars now had their headlights on, headlights that passed over us too quickly. “We’re not going to get a ride anymore tonight,” I said.

We decided, for safety sake in case the drunken cowboys came back, to walk into the darkness of the desert, where we unrolled our sleeping bags. I slept soundly, luckily for the hippie complained the next day about things crawling over us during the night.

Morning, standing on the highway, it happened. A VW Bug convertible, two girls inside with long hair blowing free, drove past. They slowed to take a look but didn’t stop. But then, half mile down the road they pulled over, turned around and came back and picked us up. I had my own “Take It Easy” moment. 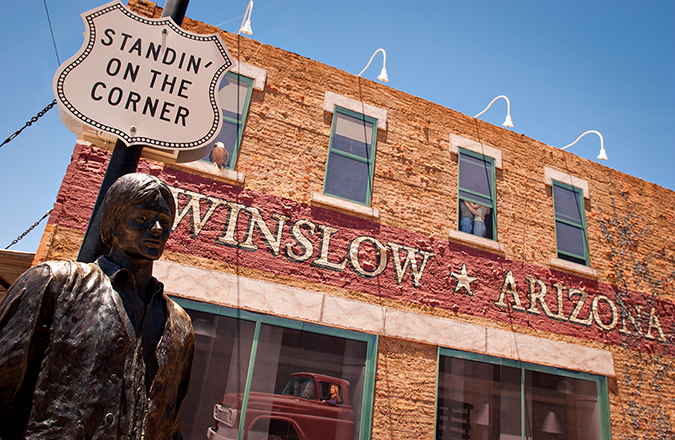