THIS DAY IN HISTORY… OCTOBER 12 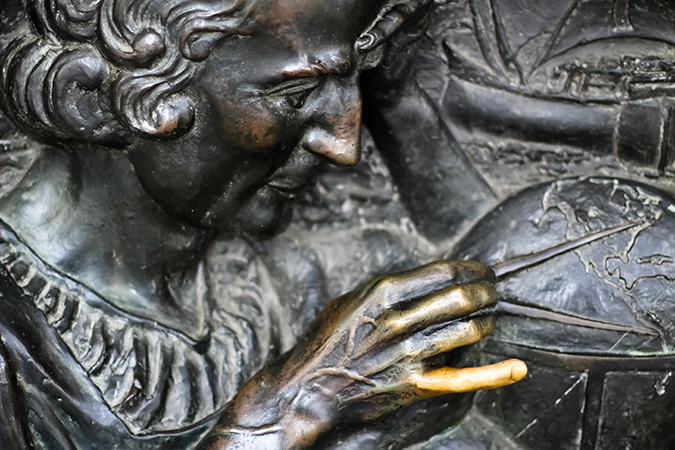 Well, it wasn’t actually America, but he did discover the New World. And it was a good thing he did, for the people living there at the time were suffering from an existential angst. They spent a lot of time wondering where they were. However, there is no record of any gratitude by them for being told that they did in fact exist.

Something I’ve never understood is why there’s a day named after Columbus.

Columbus was a brutal viceroy and governor of the Caribbean islands on which he did land. He committed atrocities against native peoples on the islands and decimated their populations.

Ah, yes, now I get it. Of course he deserved a day named after him, in that he created the paradigm on how the U.S. should treat its native population.

It was called the Asylum for Persons of Insane and Disorganized Minds.

It has since been renamed the U.S. Congress. I know, I know, too cheap and easy, but I just couldn’t resist.

1913 – The New York Giants lost the World Series that year.

John McGraw, the manager, was drinking afterwards with 3rd base coach Wilbert Robinson. They were long time friends and business partners. A dispute arose during the drinking bout and McGraw fired Robinson.

Why is this interesting? It’s not, other than I got sidetracked onto a search about Wilbert Robinson, and found this story.

Wilbert Robinson is most famous for an incident that occurred during Brooklyn’s 1915 training camp in Daytona Beach, Florida. Robinson was manager of the Dodgers at that time.

From SABR.org: “A female aviator, Ruth Law, was making daily flights in the area, dropping golf balls as a publicity gimmick for a local golf course, and eventually the talk in camp turned to the idea of catching a baseball dropped from the plane. Though none of his players was brave enough to try, Robinson, three months shy of his 53rd birthday, agreed to accept the challenge. On the big day, Law forgot the baseball back in her hotel room so she substituted a grapefruit from the lunch of one of her ground crew at the last minute. The grapefruit landed in Robinson’s mitt and exploded, knocking him down and drenching him in warm juice. Thinking he was covered in his own blood, Robinson called for help. The players rushed over and began laughing uproariously when they realized what had happened.”

An influential man, he was instrumental in the creation of Harvard College. Not content with that good deed, he converted to Puritanism and became a very effective heresy hunter. He was reportedly responsible for some of Puritanism’s harshest dictates.

I mean, really, if you have the mind set to label yourself a Puritan, how can you not be anything but harsh toward everybody else?

1875 – Aleister Crowley. Also born in England, Crowley was an occultist, magician, painter, novelist and mountaineer. He founded the religion of Thelema.

From Wikipedia.org: “Crowley gained widespread notoriety during his lifetime for being a recreational drug experimenter, bisexual and individualist social critic. He was denounced in the press as the wickedest man in the world and a Satanist. One of his famous quotes: “I slept with faith and found a corpse in my arms on awakening; I drank and danced all night with doubt and found her a virgin in the morning.”

Nobody ever confused Aleister Crowley with a Puritan.

Here is part of his act from the early 1960s before a largely white audience.

“Good evening, ladies and gentlemen. I understand there are a good many Southerners in the room tonight. I know the South very well. I spent twenty years there one night.

“Last time I was down South I walked into this restaurant and this white waitress came up to me and said, ‘We don’t serve colored people here.’ I said, ‘That’s all right. I don’t eat colored people. Bring me a whole fried chicken.’

Then these three white boys came up to me and said, ‘Boy, we’re giving you fair warning. Anything you do to that chicken, we’re gonna do to you.’ So I put down my knife and fork, I picked up that chicken and I kissed it. Then I said, ‘Line up, boys!’”

A birthday party with Dudley, Crowley, and Dick Gregory would have great potential.