THIS DAY IN HISTORY… OCTOBER 20

France sold approximately 827,000 square miles west of the Mississippi River to the United States for 15 million dollars. Spain had previously owned the territory, and when they ceded it to France in 1802 the U.S. became alarmed. Spain was weak militarily and not a threat. France, however, with Napoleon in power, was another matter. New Orleans, and control of the Mississippi River was important for commerce. While some voices in the U.S. cried out for war, President Thomas Jefferson sent Robert Livingston and James Monroe to negotiate with France. Aiding the American cause was a slave uprising in French-owned Haiti. The French army sent to quell the rebellion was devastated by yellow fever, and France doubted whether they had enough troops to occupy the vast territory. They also feared war with England, so they agreed to the sale. That 15 million dollar sale doubled the size of the new nation.

I grew up living about 50 miles west of the Mississippi River. Without that slave uprising and ultimate sale I might have been speaking French. C’est la vie.

The civil war in China matched Chiang Kai-shek’s Nationalist army against the Communist army. In a major battle the Communists were decimated and Mao Zedong took control of the remaining forces. Surrounded, on October 16th, 1934, they broke through and began a retreat that became known as the Long March. Pursued relentlessly by the Nationalists, fighting daily skirmishes, they retreated for 4,000 miles. The line of marchers stretched for miles, carrying their supplies on their backs or with horse-drawn carts. Over the course of a year they crossed 24 rivers and climbed through 18 mountain ranges. They began the march with 85,000 soldiers; at the end only 8,000 were left. The march did, however, gain them support from the populace and many joined the Communist army. It also gave rise to Mao’s reputation and cemented his role as head of the Communist Party in China. It was a position he would not relinquish until his death.

I’ve read a couple of books on the Long March and it was an epic and heroic trial of survival. No matter what one’s political persuasion, a truly fascinating story.

Johnny Bright was a quarterback for Drake University and a leading candidate for the Heisman Trophy that year. He was also African-American and at the time integration in sports was being fiercely resisted. Drake played Oklahoma A&M, now Oklahoma State University, in Stillwater, Oklahoma where the spirit of Jim Crow was very much alive. Before the game Oklahoma newspapers reported that Bright was a marked man, and an Oklahoma A&M coach encouraged his players to “Get the _ _ _ _ _ _!” Right from the start Bright was targeted. Bright had handed the ball off and was watching, clearly out of the play when tackle Wilbanks Smith of Oklahoma A&M ran up and delivered a forearm smash to the jaw. Bright remained in the game despite a broken jaw, even threw a long touchdown pass, but was repeatedly targeted, knocked unconscious, and had to leave the game. Drake lost for the first time that year.

A photographer at the game caught the assault in a six photo sequence, for which he won the Pulitzer Prize. The photos caused outrage across the nation, prompted rules changes in college football, made the helmet face mask mandatory, and was another spark in the Civil Rights Movement. Although he didn’t win the Heisman, Bright went on to a successful career in the Canadian Football League and is in the Canadian Football Hall of Fame. He never expressed any bitterness or resentment over the incident. Neither did Smith ever apologize. In 2012 Smith said he believed the incident helped integrate college football and also stated, “I think it was a tool [Civil Rights’] organizations used, and it was very effective.”

Hey, everybody has to do their part.

Politician and general. Sickles was one of the more controversial characters of his time. A product of the corrupt Tammany Hall political machine in New York City, he rose to prominence. Elected to the U.S. House of Representatives, Sickles and his wife lived a lavish lifestyle in Washington D.C. Each also participated in extramarital affairs. This led to Sickles killing a man named Phillip Key, his wife’s lover. Phillip Key was the son of Francis Scott Key. He dodged the charge by pleading “temporary insanity,” the first time that defense was successfully used.

When the Civil War began, his connections landed him a role as an officer in the Union Army. Brave in battle, he gained a reputation for arguing with superior officers. At Gettysburg he commanded the Third Corps and outright disobeyed orders and nearly cost the Union a victory. Ordered to cover the Union’s left flank, he instead moved his corps forward, and was promptly overrun. Another general ordered the 1st Minnesota to cover the gap in the Union line. Outnumbered five to one, they saved the day for the Union but the regiment lost 82% of its men. Despite his blunder, Sickles was awarded the Medal of Honor, probably due to his connections and the fact that he lost his right leg at Gettysburg. He then donated the amputated limb to the Army Medical Museum in DC. The limb is still on display at Walter Reed Hospital. After the war, he was chairman of the New York Monuments Commission, until he was removed for embezzling funds. He died in 1914 and is buried at Arlington National Cemetery.

Not much I can add about this guy.

Actor.  Lugosi is most famous for playing Dracula in the movie of that name in 1931. That movie marked the start of interest in horror movies that exists to this day. Besides acting, Lugosi was good at two other things, spending money and marrying women. He was also into drugs and addicted to morphine the last twenty years of his life. He died broke in 1956 at age 73. He was buried in a cape he wore as Count Dracula.

I have enough horror inside my head without adding to it with horror movies so I’ve never seen Lugosi work.

Musician, bandleader, composer. A mix of African-American and Creole, Morton began playing piano in brothels at age 14. He was one of the first to play jazz and created controversy by claiming he invented it. That claim can not be substantiated, but what he did do however was publish “Jelly Roll Blues,” which was the first jazz composition ever published. He was one of the earliest innovators of the new form of music. In 1938 Morton was stabbed in the head and chest in a club he managed in Washington, D.C. Complications from the chest wound eventually led to his demise in 1941.

Whether he invented it or not, it seems jazz should have been invented by someone named “Jelly Roll.”

* Lead-In Image (1900 map) – Jim Pruitt / Shutterstock.com – “A map of the United States showing the steps in which the US grew over time from Spofford’s Atlas of the World, printed in the United States in 1900, created by Rand McNally & Co.” 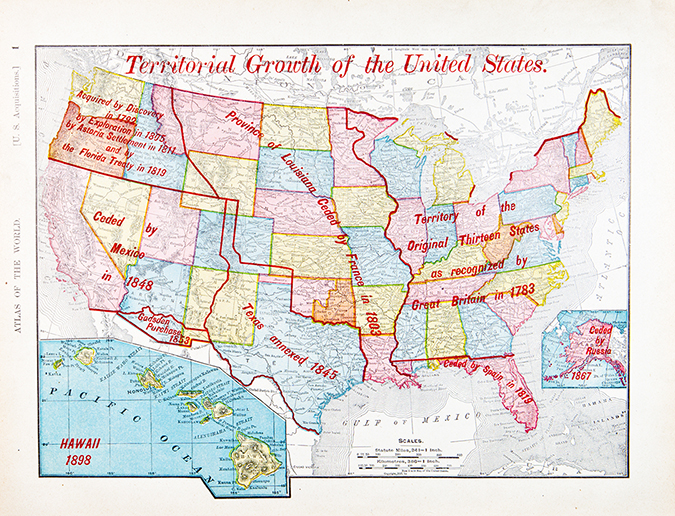