THIS DAY IN HISTORY… OCTOBER 24

During Virginia’s Secession Convention, a large number of delegates from the western portion of the state left the convention in protest. They decided to form their own state, one that would be loyal to the Union. An election was held in the west, and the vote for statehood passed 18,162 to 514. There was some question about the honesty of the election, however. There had been a Union Army victory in northwestern Virginia and Union troops occupied the region where the election took place. It has been suggested that those troops hung around polling locations and prevented Confederacy sympathizers from voting.

A dishonest election in America? What an absurd suggestion! To put your mind at ease, I did exhaustive research into the West Virginia election and found no evidence whatsoever of interference by Russia.

The Hungarian Revolution began a day earlier with a peaceful demonstration protesting Russian influence over their government. The crowd quickly grew from 20,000 to over 200,000, and a statue of Lenin was torn down and replaced with Hungarian flags. Hungarian soldiers tore the red flags from their uniforms and joined the protest. The State Security Police (AVH) was routed and the crowd chanted a previously-banned patriotic poem. They marched to the Radio Budapest building where they intended to broadcast their demands for independence. There a rifle shot from the AVH killed a student and that marked the beginning of the bloody revolution.

As the Soviet tanks rolled into Budapest on the 24th, Hungarian freedom fighters, armed only with small weapons and Molotov cocktails, fought back. There were battles throughout Hungary, but the revolution was centered in Budapest, where there was ferocious street fighting for the control of the city. Fighting from alleys, rooftops, and the sewer system, the freedom fighters fought the Soviet tanks to a stalemate for two weeks. The resistance was led to believe by broadcasts from Radio Free Europe that the United States was about to intervene on their behalf with military aid and soldiers. Eisenhower, thinking that it might lead to a nuclear showdown with Russia, decided against intervention. The revolution was eventually crushed with overwhelming military force.

Thirteen-years-old at the time, I was mesmerized by the accounts of the Budapest street fighting. Unaware of the true brutality of war, I romanticized the fight. Boys my age, armed with Molotov cocktails, were confronting Russian tanks. I imagined myself in such a heroic role. Thankfully I only had to reside in my imagination, and not reality.

I was in a writing group for years and one of our members was a man named Dennis. Dennis was a fellow writer and a friend. At the time of the Hungarian Revolution he was a paratrooper in the U.S Army. He remembered being told to “saddle up”, destination unknown, but they were all pretty certain where they were going. Fortunately for Dennis, and probably the world, except for the Hungarian freedom fighters, the operation was cancelled.

So even though quite remote from it, this bit of history always seems personal to me.

FBI agent and lawyer. The most famous FBI agent during the crime ridden era of the 1930s, Purvis was responsible for ending the infamous careers of John Dillinger, “Pretty Boy” Floyd, “Baby Face” Nelson, and several others on the most wanted list. Known as meticulous, his attention to detail aided him in his pursuit of dangerous criminals. Modest, soft-spoken with a southern drawl, small in stature, he became a favorite of the press. Despite the fact that Purvis deflected praise and worked hard to share credit with other agents, his fame greatly annoyed FBI director, J. Edgar Hoover. In fact Hoover’s petty tyranny caused Purvis to resign from the bureau in 1935. The press was outraged, and other agents resigned in protest, but Purvis refused to be critical of Hoover.

Purvis practiced law and served as a Lt. Colonel in the military during WWII. Hoover’s wrath continued to pursue him, however. Hoover’s secret campaign cost Purvis employment opportunities and even prevented him from becoming a federal judge. Loyal servant that he was, Purvis never fought back. He died of a self-inflicted gunshot wound in 1960. It was ruled a suicide, although some thought it may have happened accidentally while he was cleaning the gun. Hoover never bothered to send any note of condolence. Purvis’ widow sent Hoover a telegram after his funeral stating in part, “We are honored that you ignored Melvin’s death,” as she acknowledged Hoover’s antagonism.

At least history recognizes what Purvis accomplished, despite Hoover’s vendetta.,

Playwright. Hart first collaborated George Kauffman to write a string of Broadway hits including “You Can’t Take It With You,” and “The Man Who Came To Dinner.” Hart’s success continued after he and Kauffman decided to no longer work together. Hart also wrote the screenplay to 1954’s A Star Is Born and an autobiography entitled “Act One.” He died prematurely of a heart attack at age fifty-seven.

I read “Act One” a long time ago and remember it as a very entertaining book. Maybe I should go back and re-read it. That does present a dilemma, however. With so many good books I haven’t yet read, is it acceptable, or prudent, to go back and re-read one? There is also a possibility I won’t like it the second time, and thereby ruin a good memory.

I watched the show a few times when I was a kid and never could get into it. I mostly found it strange. 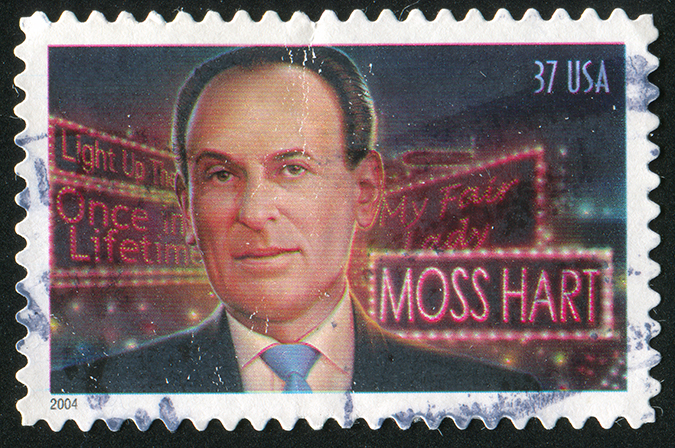