THIS DAY IN HISTORY… OCTOBER 25

Following in the tradition, however haltingly, of such writers as Ernest Hemingway, John Dos Passos, and Arthur Koestler, I wrote the initial draft of this column in Madrid, Spain. Having just finished a ten-day biking tour in Catalonia, I sat on a third floor balcony overlooking a plaza and jotted down these words. My trip had coincided with the civil unrest taking place in that region.

To set the record straight, I am not a trained journalist, or any other kind of journalist for that matter. Although I do sometimes aspire to the Gonzo aspects of that profession. So in this report I relied more on hearsay and wine than on digging up facts. But, as we have witnessed lately, facts don’t seem to matter all that much in the new world order. Reality as well now comes in the form of imagined, virtual, or pre-fabricated. So I figured, what the hell, when in Rome…or Catalonia.

There is an independence movement within Catalonia to separate itself from Spain. They held, or tried to hold a vote on October 1st. I arrived on October 3rd. The vote was suppressed, brutally at some polling places, by Spain’s Civil Guard. The Civil Guard is a paramilitary law enforcement agency that has ruled supreme in Spain for 150 years. They were especially hated in the years leading up to the Spanish Civil War and don’t seem to be any more accepted in Catalonia right now.

Biking around the region I saw them stationed at public buildings that might be used as voting places. More stormtrooper than beat cop, they wore dark blue uniforms, knee high jack boots, either berets or helmets with shields, and carried a short-barreled automatic weapon slung across their chests. Apparently militarizing the police is a worldwide trend. The intent can only be interpreted as to intimidate and control rather than protect and serve.

Catalonia, with the port city and popular tourist destination of Barcelona as its hub, is the richest region of Spain. And according to those I talked to, therein lies the problem.

Catalonians feel they are being taxed much more unfairly, severely, than other areas of Spain. Toll roads were one of the examples cited to me. The tolls collected were used to support the highway system throughout Spain yet Catalonia is the only region with tollbooths. Schoolbooks were another. School children in other parts of Spain receive free books while in Catalonia they have to pay for them.

They feel, tax-wise, that Catalonia is supporting the rest of Spain. I asked if the leaders of the movement truly wanted separation of if they were trying to force Spain into a bargaining position. Most believed the latter. However as the movement has gained momentum, more purists, and as is usually the case, crazies, have joined in. You know, the usual give me liberty or give me death crowd.

Before the anticipated vote, the Spanish government had prepared by filling two huge cruise ships with the Civil Guard. The ships were then positioned in the Barcelona harbor.

For two weeks the police were held virtually prisoners aboard the ships. By the time they were unleashed upon the population they had a reservoir of pent-up energy. In releasing that energy, almost a thousand Catalonians were sent to the hospital. Voting day began with the festive air of a holiday and ended in brutal violence. The government had really miscalculated with its show of force, one woman told me. She thought there was a fifty-fifty split before the vote. After the show of force, and resulting violence, most Catalonians supported separation.

The bitter phrase I heard a number of times was: “That fascist government in Madrid.” It was described as being a remnant of Franco’s once powerful ruling party. Whether that is true or not, I don’t know. What is evident however, is that even after eighty years Spain is still sifting through the residue of its brutal civil war. I’ve seen it on a previous trip to Spain.

Monuments defaced by either anti-Loyalist or anti-Fascist graffiti. And Catalonia, Barcelona especially, was one of the most fervent pro-democracy regions, and the last one to finally succumb to Franco’s (and Hitler’s and Mussolini’s) superior firepower. Are they still being punished for that defiance, and is their passion rising from the embers of that heroic struggle? Maybe that’s a stretch, maybe not. As we have recently seen in Charlottesville, Virginia, wounds of a civil war are easily reopened. Passions revived, old hurts remembered.

Everywhere in Catalonia, and I mean everywhere, their flag is being displayed. Even more prevalent is a single colored flag or banner with the word “Si” emblazoned on it. If there are those in Catalonia against separation they wisely are not advertising that sentiment.

I ended my trip in Madrid. I don’t speak Spanish so I was unable to eavesdrop on conversations in the cafés or on the street. So I have no idea how the rest of Spain was reacting. There were no overt signs however, no anti-Catalonia displays. If they did care, it definitely was at a less intense level than in Catalonia.

While in Madrid, I went to the Renia Sofia Museum. The museum has on display Picasso’s famous painting “Guernica.” Besides being a powerful piece of art, I also embrace it as a political statement. I entered the room where the painting was hung and was met with reverential silence. 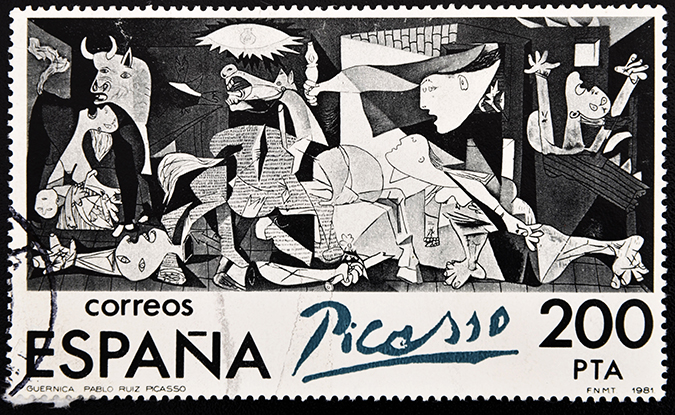 There was a low, knee-high rope in a semi-circle around the painting to keep people from approaching. The crowd kept back another respectful three feet from the rope. The people viewing Picasso’s distorted but powerful painting impressed me almost as much as the work itself. It seemed as if every race on earth was represented there. All brought together by a common bond of appreciation. If there is a greater value of art, I don’t know what it is.

And then to add to my day, there was an adjacent room with a magnificent black and white photo exhibition from the Spanish Civil War. About a third were taken by Robert Capa and the rest by unknown photographers. Some I had seen before, like Capa’s moment of death photo of a loyalist soldier. Others were new to me. Loyalist soldiers firing rifles from behind a barricade of dead horses. Spanish women, armed with rifles, fighting alongside men. A woman taking a break, her rifle leaning against a wall, reading a glamor magazine.

After I finished with the photo exhibit I went back to view “Guernica” one more time. I thought the placement of the two exhibits next to one another was genius. A perfect compliment, especially politically. Time, for me, was transcended. The exhibitions brought me back to that era. I shared the passion of the people fighting in the streets for the life of Madrid, and I felt the horror of Guernica being bombed into rubble by Hitler’s Condor Legion.

If, indeed, there is a fascist government in Madrid as Catalonians insist, it either doesn’t understand or is very permissive, in allowing an exhibition of this powerful persuasion.

Thinking about the Spanish Civil War, and Catalonia, I can only hope reason prevails and that the government doesn’t continue with its heavy-handed tactics. Whether through independence or compromise, violence has to be avoided. However great the art that came out of the Spanish Civil War, we don’t need new art to address new violence.