THIS DAY IN HISTORY… OCTOBER 4th

Having occupied Philadelphia, British general William Howe moved 9,000 of his troops to the small town just outside the city. General Washington moved his 11,000-man army, divided into four columns, during the night so he could attack at dawn. The attack started off as a success before running into stiff resistance. One of Washington’s columns got lost in a heavy fog and never attacked. Two confused American regiments fought each other but both fortunately retreated before inflicting heavy casualties. The battle was a victory for the British but the Americans were heartened by their own effort. They attributed the defeat to bad luck and felt that they were capable of beating the enemy. It was the last major fight of that year. The British wintered in Philadelphia while the Americans endured Valley Forge.

The Americans were learning they could stand up to the British.

The route was from Paris to Istanbul, via Munich and Vienna. The original route included a ferry across the Danube and another ferry to complete the journey into Istanbul. The route changed at various times over the years. With its sleeper and dining cars the Orient Express gained a famous reputation in the 1930s for comfort, luxury, and fine cuisine. Agatha Christie’s murder mystery added intrigue to the mix. Kings, spies, and smugglers added to that intrigue by riding the train. Service was suspended during both World Wars. As the years went by routes changed, service diminished and the Orient Express became a tarnished version of its former glory. Eventually high-speed rail service replaced any need for the gloried train and route. The Orient Express is no longer in service but in its time it was called the “Train of Kings and the King of Trains.”

I love train travel and regret having missed out on the experience of riding the Orient Express. Although when the famed train was at the height of its glory there’s no way I would have been able to afford it.

Sculpting began on the mountainside on this date. As a way to attract more tourists to South Dakota, historian Doane Robinson hired Gutzon Borglum to carve the faces of four presidents, Washington, Jefferson, Lincoln, and Teddy Roosevelt, onto the side of the mountain. Funded mostly by the federal government, the project would cost a million dollars and take fourteen years to complete. Robinson’s dream was a success and the monument is a major tourist destination, attracting three million visitors a year.

I hope the statute of limitations have run out on any offenses revealed in this story. At the viewing site there is now a fence at the bottom of the mountain to prevent those with the wild idea of climbing up to the presidential faces. I, along with two of my classmates, may be partially responsible for that fence. My high school graduating class, all twenty-two of us, took our Senior class trip to the Black Hills of South Dakota. One of the stops, of course, was Mt. Rushmore. I stood next to Breezy and Merle as we looked up the mountain. Breezy had been a good athlete throughout high school. Quarterback in football, point guard in basketball, and pitcher in baseball. Because he wanted to stay active in sports he always toed the line when it came to behavior. Merle, on the other hand, seldom did. Challenging authority was his specialty. Ducktail slicked back, collar turned up, James Dean rather than Pat Boone. An outlaw, but a funny outlaw. One English class we were to write a sales letter and then read it aloud to the class. Merle’s opening sentence was: “Do the constant explosions of atomic bombs annoy you?” He was selling portable bomb shelters. It was hard not to like Merle. And myself, well, in high school embracing bad ideas was one of the few talents I exhibited.

“Let’s go up there” Merle said.

I mean, when the idea even appealed to Breezy, what choice did I really have? We walked away from the viewing area and found a little path that wended its way upward through the pines trees. Now Breezy, for reasons best known only to himself, was wearing bright red slacks that day. Please remember, this was a different era.

Following behind Merle and Breezy, I didn’t think we would get anywhere close. It hadn’t seemed like we had been climbing all that long when suddenly, through the pines, I saw Abe Lincoln’s huge granite face looming above us.

We left the concealing safety of the pines and started across the slabs of granite that had been dynamited from the side of the mountain. I looked down at the visitors center far below and a rare bolt of common sense froze me in place. Realizing perhaps this might not have been that great of an idea after all, I retreated back to the pines. I remained there while Merle and Breezy scrambled out onto the rocks beneath Abe’s beard. Down below some of our classmates had telescopes focused on us, and as they said later, Breezy’s red pants really stood out. Merle and Breezy didn’t cavort too long out in the open before also coming to their senses. We eluded the authorities awaiting our descent (I learned later that the South Dakota State Patrol had been notified) and tried to blend into the crowd of tourists. Breezy’s red slacks didn’t help our cause all that much.

We were identified but before severe restrictions could be placed upon our freedom, our chaperones came to our defense. They convinced the authorities we were good kids and had just made a youthful indiscretion. We endured a severe lecture while masking a secret pride at what we had pulled off. Although at a subsequent visit to the monument decades later I cringed a bit at seeing the fence and warnings of prosecution for trespassing.

Irresponsible and reckless to be sure, but it was our last chance to be school kids because by the time that summer was over all three of us were in the military. Merle and I in the Navy, and Breezy in the National Guard. It was also my last memory of being with either of them, a warm memory because they have both since passed away. 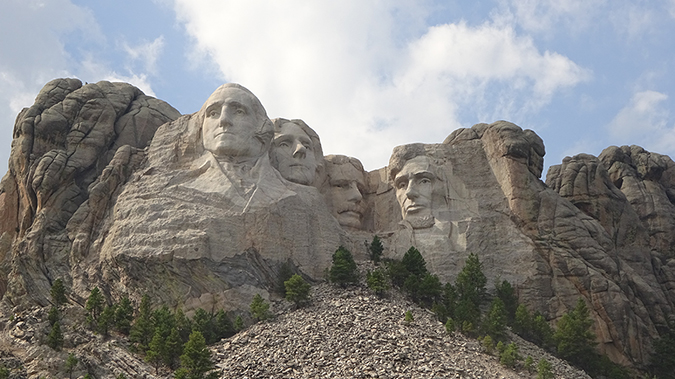