THIS DAY IN HISTORY… OCTOBER 9

Vinland is on the east coast of North America, modern day Newfoundland. This landing took place almost five centuries before Columbus “discovered” America. The Norsemen gave it the name Vinland because they found enormous grapes growing there. Erikson and his 35 men, having sailed from Iceland, wintered there but never established a permanent settlement, thereby leaving the issue of what European first stumbled onto North America somewhat in doubt.

The year, 1000, of his landing is uncertain so it is a stretch to assume it happened on October 9th, but then any date would be. What is significant is that they were there and that is adequately documented.

Batavia was a city in the Dutch colony of Indonesia. The city is now called Jakarta. Chinese workers had been brought in to help with the sugar industry. There was unrest among the Chinese sugar mill workers because they felt they were being exploited by the Dutch. In an uprising 50 Dutch soldiers were killed. Dutch Governor Adriaan Valckenier responded by spreading rumors among other ethnic groups that the Chinese were planning to enslave them. These groups along with the Dutch army attacked the Chinese district. Few were spared and thousands of Chinese were killed. After the initial onslaught open season was declared and the Dutch offered a reward for each Chinese head brought in. Eventually an estimated 10,000 Chinese died. In the aftermath sugar production declined and took decades to recover. Governor Valckenier was arrested and charged with crimes for his part in the massacre. Convicted, he was sentenced to death but died in prison while appealing his case.

The most surprising part of this story, given the time period and the racial attitudes of that period, is that a white man, and a colonist, could be found guilty for mistreatment of non-white people.

The Cincinnati Reds defeat the Chicago White (Black) Sox five to three in the best of nine World Series. Chicago, the more talented team was expected to be the betting favorite but shortly before the games began the Reds became favored to win. This cast suspicions, suspicions that later proved to be well founded. Eight Chicago players, including star outfielder Shoeless Joe Jackson, had taken money to throw the World Series. They first admitted their guilt, then later recanted those confessions. The signed confessions somehow mysteriously disappeared. In a public trial they were acquitted by a sympathetic jury. However due to the scandal Judge Kenesaw Mountain Landis was appointed Commissioner of Baseball. He promptly banned all eight players permanently from playing professional baseball. This ban has also kept Shoeless Joe from being in the Hall of Fame.

Kenesaw Mountain Landis, great name, was known as a stickler for upholding the letter of the law. Except for maybe when it came to himself. During Prohibition the stern judge was known to be a frequent imbiber and turned a blind eye toward bootlegging. Double standard for application of the law in America? Perish the thought.

Nobel Prize winner. Von Laue, a German physicist, won the Nobel for his discovery of the diffraction of x-rays by crystals. (Whatever that means.) He was also a contemporary of Albert Einstein when Einstein was developing his theory of relativity. When the Nazis came to power that theory was dismissed as “Jewish psychics.” Von Laue found the accusation ridiculous and said “science has no race or religion.” While many German scientists embraced views in line with the Nazi Party von Laue continued to defend science as science. When outside he always carried parcels as a way of avoiding giving the Nazi salute. Despite his opposition to the Nazis he continued working and managed to survive the war, one of the few scientists who had not compromised. After the war he was briefly interned in England with other German scientists who were thought to be involved in the development of nuclear power. This was done mostly to keep them from falling into the hands of the Russians. Von Laue was released and continued working in psychics until his death in 1960 in an automobile accident.

“Science has no race or religion.” Politics should be added to that list also.

Writer, historian. As a child Catton listened to stories from aging veterans about the Civil War that ultimately dictated his direction in life. He attended college but dropped out when WWI started and served in the U.S. Navy. A journalist between the two world wars, he became a government employee with the advent of the second. It was then he began to write about history and and in the 1950s found great success with his Civil War trilogy. Some were critical of his approach, including writer Gore Vidal. Vidal put him in the category of writers who tended to whitewash central figures rather than also detailing their flaws. An example would be that Catton celebrated Ulysses S. Grant as being a great general, he did not also dwell on his prodigious drinking habits. Catton died in 1978 and his legacy includes being regarded as one of the great Civil War historians and Ken Burns’s Civil War documentary is partly based on his books.

Off the subject a bit but when someone complained to Abraham Lincoln about Grant’s drinking, Lincoln replied “Find out what he’s drinking and give it to the rest of my generals.”

Photographer. Rosenthal was living in San Francisco and working as a newspaper photographer when WWII broke out. He initially tried to join the Army but failed the physical. Instead he was assigned by AP to cover the war in the Pacific as a photographer. Rosenthal was with the first wave when the Marines hit the beach at Iwo Jima. After four days of fighting a platoon of Marines raised the American flag atop Mount Suribachi. Rosenthal arrived at the summit too late to photograph the event but was there when a second and much larger flag was raised. It was then Rosenthal snapped the most famous and iconic war photo of all time. His photo of five Marines and one Navy corpsman planting the flag was immediately displayed in every newspaper and venue across America. Rosenthal, still engulfed in the bitter fighting on the island, was unaware of the sensation he had caused. When asked if the photo was staged, thinking they were referring to a different photo, he replied yes. Controversy has followed the photo since, including the identity of the six men. Another photographer, defending Rosenthal, said it couldn’t have been staged because it was just too perfect. After the war Rosenthal worked at the San Francisco Chronicle until his retirement in 1981. He passed away at age 94, never having capitalized financially on his famous photo.

I’m not sure why there’s controversy regarding the photo. Accompanying Rosenthal that day was a film photographer and I’ve seen the film he shot of the flag raising. The Marines pick up the flag pole and the raising is over in seconds. It is nowhere near as dramatic as the photograph. A split second either way and Rosenthal wouldn’t have had his picture. The Marines then began milling about again, unaware of their famous moment in history. 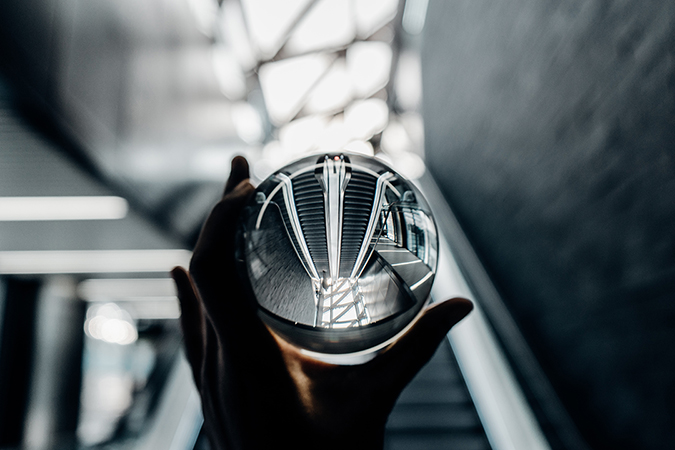