THIS DAY IN HISTORY… SEPTEMBER 17

The islands’ first arrivals came from the Marquesas Islands via canoes around 400 A.D. Thirteen hundred years later, paradise was exposed when Captain Cook “discovered” them. Whale oil was in high demand at the time, and the ocean around the Hawaiian Islands was fertile feeding grounds for sperm and humpback whales. Two whaling ships from the east coast of the U.S. arrived and life in the islands was changed forever. The islands provided food and water and in return received liquor, disease, and missionaries. A way of life was eradicated and replaced with capitalism and religion.

And we know who got the poopy end of that stick.

A National Football League expansion team, the Vikings played their first game against the heavily favored Chicago Bears. To everybody’s surprise, they scored a 31-13 victory. Rookie quarterback Fran Tarkenton came of the bench to throw four touchdown passes and ran for another. The Vikings would finish the season with a record of 3-11.

Even though an avid sports fan, I felt little excitement at the team’s thrilling initial victory. I was a week and a half away from enlisting in the Navy at the time and that must have been weighing heavily on my mind. Sports seemed unimportant, insignificant. That’s some profound insight I should have held onto as I later watched the Vikings lose four Super Bowls.

President Jimmy Carter brokered a treaty between Israel and Egypt. Held at presidential retreat Camp David, Egyptian President Anwar Sadat and Israeli Prime Minister Menachem Begin signed the accord. It led to a peace treaty between the two nations and also resulted in Sadat and Begin sharing the Nobel Peace Prize for that year. It was hoped the accord would lead to a lasting peace between Israel and its neighbors.

No such luck, as history has shown.

Also known as Charles the Straightforward, he was king of West Francia from 898 to 922. One of his notable achievements was negotiating with Rollo, of an invading Viking army that had besieged Paris, resulting in a treaty. Disgruntled nobles, frustrated by some of his policies, forced him from office and he died in prison in 929. Also of interest, his father was Louis the Stammerer, and he had a cousin called Charles the Fat.

I have to wonder about these rather descriptive, and indelicate, names bestowed upon the leaders of past eras. Was everybody aware of them other than the person themselves? Did people go around whispering the names in malicious delight? I don’t suppose it would have been proper for someone in the royal court to bounce up to the king and say, “Hey, Simple, my man, how goes the kingdom today?”

Poet and doctor. Williams treated patients by day and wrote at night. From Wikipedia: “Williams sought to invent an entirely fresh and uniquely American form of poetry whose subject matter centered on everyday circumstances of life and the lives of common people.” Williams had a deep sense of humanity that he brought both to his role as a doctor, and as a poet. Later in life he was a mentor to those of the Beat Generation, including Allen Ginsberg. He was the poetry consultant to the Library of Congress, but, because of his socialist leanings, was removed from that position during the McCarthyism era of the 1950s. Williams was stricken with a series of strokes until his death in 1963. Later that year he was posthumously awarded the Pulitzer Prize for poetry.

To my loss I’ve never been much for reading poetry. Although something I have just discovered is that if I read it out loud I achieve more meaning from it. Perhaps I’ll read William Carlos Williams out loud to myself.

Country western singer. Despite dying tragically of his addictions at age twenty-nine, he left a legacy of country western hits that endure to this day. “Cold Cold Heart,” “Hey, Good Lookin,” “I’m so Lonesome I Could Cry,” “Your Cheatin Heart,” and many, many more. His contribution to American music stands the test of time.

To hide its face and cry /

The silence of a falling star
Lights up a purple sky
And as I wonder where you are
I’m so lonesome I could cry. 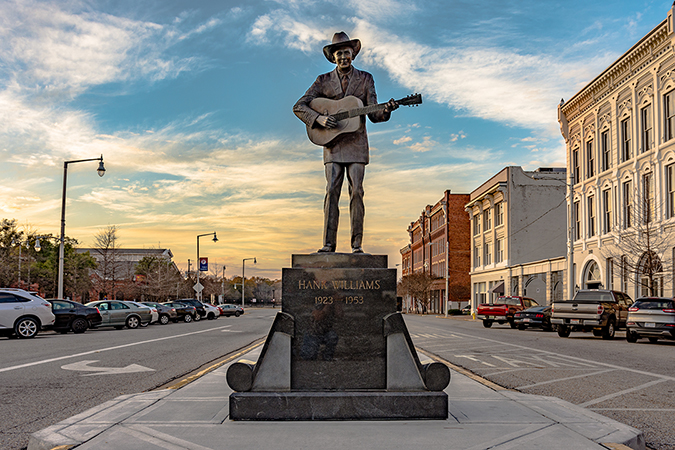