THIS DAY IN HISTORY… SEPTEMBER 19

The first uprising against the colonial government in North America. Although this one was less than noble. 300 to 500 rebels, led by Nathaniel Bacon, burned Jamestown, Virginia, the capital, to the ground. Earlier they had razed an Indian village, killing most of the men, women and children there. The Indian issue was at the heart of the problem. Many colonists wanted to drive the Indians westward and claim their land. The colonial governor, William Berkeley, had a more compassionate attitude toward Native Americans. Bacon’s army issued a “Declaration of the People” and in it, one of the complaints against Berkeley was that he was pro-Indian.

There was more at stake in the rebellion than that one issue. Trading rights, and influence within the government were also issues. The rebellion was financially backed by some wealthy men maneuvering against Berkeley’s influence. Bacon became head of the rebellion by showing up at a gathering of discontented frontiersmen with a large supply of brandy. The British assembled a naval squadron to confront the rebellious army but before that could happen Bacon died of dysentery. The rebellion lost its energy at that point and scattered, with twenty-three of the leaders rounded up and hung. The wealthy backers switched their allegiance to Berkeley and escaped unscathed.

Is is any wonder that during the Revolutionary War many Native American tribes sided with the British?

Pilecki, an officer in the Polish army, volunteered to be arrested in order to be sent to Auschwitz. Rumors about the atrocities coming from the death camp needed to be validated. He smuggled out information so the Allies were aware of the reality of the concentration camps as early as 1941. After two and a half years in Auschwitz he escaped and made his way back to Warsaw. There, as part of the underground resistance, he fought in the Warsaw Uprising of August, 1944. Captured after that uprising was quelled, he was sent to another camp in Bavaria where he was liberated by the advancing American Army. He then joined the Polish Free Army fighting the Nazis. After the war he returned to Poland where he was engaged in intelligence gathering for the government. However, in 1947 he was arrested by the Polish communist secret police. At the age of 47, after a show trial, he was executed.

A sad fate for a true hero, someone who sacrificed himself for cause of freedom. As with Raoul Wallenberg whom I wrote about in an earlier blog, he fought one totalitarian regime only to fall victim to another.

British born, the famous movie star had been living and working in the U.S. for forty years when he took a trip to Europe to promote a new film. Earlier he had been branded a communist by Senator Joseph McCarthy and blacklisted in Hollywood. Informed he’d be arrested if he tried re-entering, he returned to England. Chaplin had publicly stated that he was not a Communist, but someone “who wants nothing more for humanity than a roof over every man’s head.”

Hah, with an attitude like that, what choice did McCarthy have but to label him a communist?

Founding Father. Carroll was a signer of the Declaration of Independence and the only Catholic among that notable body. Freedom of religion in the Constitution is believed to have been in tribute to him. He was the wealthiest man in America at the time of the revolution and contributed heavily from his fortune to the war effort. Schooled in France by the Jesuits, Carroll spoke five languages and was one of the mostly highly educated members of the Continental Congress. He inherited and owned a huge planation in Maryland that included over a thousand slaves, whom he later freed.

Despite being barred from holding political office in Maryland because he was Catholic, Carroll was an early advocate for independence. Writing under the pseudonym “First Citizen” he had articles published arguing against British rule. He also understood and accepted that war was the only way America would gain its freedom. Carroll became the last living signatory of the Declaration of Independence when Jefferson and Adams both passed away on July 4th, 1826.

I hadn’t been aware of him before. Fascinating man. Because of slavery his wealth was probably ill-gotten, but at least he had the decency to free them. I wonder though if he freed them with any of his wealth.

First woman governor of Alabama. Her husband, George Wallace, was prevented from running for a consecutive term by law so she ran in his place. She was a sixteen-year-old clerk at a five and dime store when she married George. She had four children with him and once filed for divorce because of his extra-marital affairs. In 1961, after the birth of her fourth child, the doctor discovered she had cancer. He told George, who decided to withhold that information from her. She missed out on early treatment and didn’t discover her condition until an examination in 1965. Lurleen ran for governor while being treated for cancer. While in office, one of her main accomplishments was to improve the living conditions at institutions for the developmentally disabled. In 1968, as her condition worsened, George was off campaigning for president. As late as April, 1968 George lied to the media, telling them Lurleen had won her battle against cancer. He was at her bedside however, when she died on May 7th, 1968. George moved out of the Governor’s mansion to a new residence at that time but did not take his children with him. He shipped them off to live with friends and relatives.

By all accounts it appears Lurleen married down.

Rock and roll singer. Most well known for being a singer with the Mamas and the Papas. Elliot was a large woman and John Phillips, the group’s founder, initially did not want her in the group because of her weight. Until he realized how much better their songs sounded with her singing along. The group had a number of hits in the late 60s including “California Dreamin” and “Monday Monday.” Elliot had to endure jibes about her weight throughout her career, and in one way, even after her tragic death at age thirty-two. The story about her choking to death on a ham sandwich in bed is not true. She died of heart failure. There was a ham sandwich beside her bed when she was found, but it was untouched. Cass Elliot was posthumously elected to the Rock and Roll Hall of Fame.

On TV one night while she was still alive, I saw her in a sketch. She was sitting on a bench next to a young man who was blind. He was awaiting an operation that might give him back his sight. They begin talking and connect spiritually, emotionally, intellectually. They begin to fall in love. Then she tells him she is quite heavy and if he could see her, this whole scene would be quite different. He assures her it doesn’t matter, that he has discovered her inner and true essence. He regains his eyesight, looks at, and rejects her. I got the feeling she wrote the sketch and it was a metaphor for her life.

From Wikipedia: “The quartet’s debut album, If You Can Believe Your Eyes and Ears, followed in February 1966 and became its only No. 1 on the Billboard 200.” 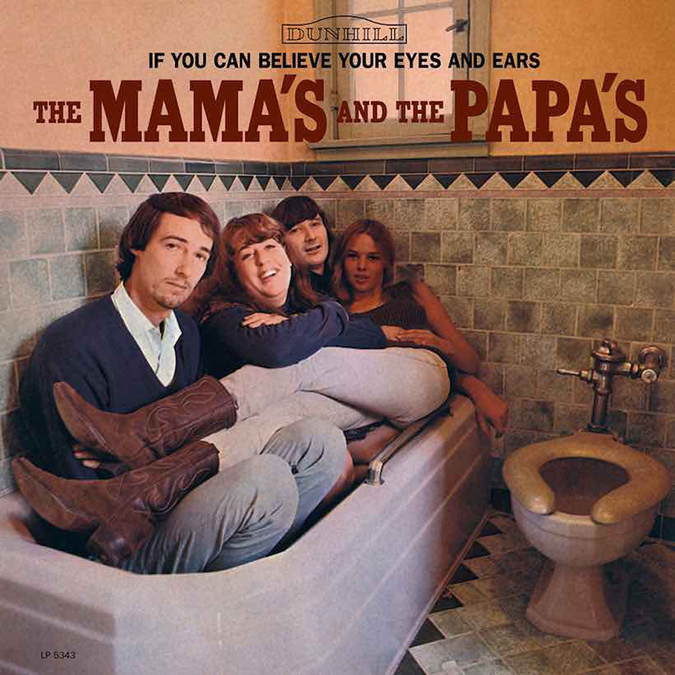