This week’s edition of AWOPBAMBOOM features a music video about avian love, the dictionary definition of “tub-thumping,” a review of Jesus is Born, and more.

Plug in your headphones and happy listening!

James Blake’s music video for “I’ll Come Too”— a song about following love wherever it asks you to go and waiting for the person you love when he or she is with someone else— showcases a tragic romance between a Fiordland Crested Penguin and a Salvin’s Albatross: a relationship that never could work. The quality nature documentary shots— provided by BBC Earth— are beautifully detailed and well-placed in relation to the progress of Blake’s song. I, personally, have never empathized with a penguin more in my life.

Chumbawamba, which is more of a ridiculous syllabic car-crash than a witticism.

The band name appears to be a made-up word that may have come from a dream or a chant, according to JacobinMag.com.

For those of you that are curious…

“Tub-thumping – informal/derogatory – adjective – expressing opinions in a loud and violent or dramatic manner” (from the Pocket Oxford English Dictionary).

Jesus is Born by the Sunday Service Choir

Kanye West is a musician known for his narcissistic persona (inside and outside of his work) and, more importantly, his Grammy-nominated and winning albums: The Life of Pablo and My Beautiful Dark Twisted Fantasy.

Here, Kanye dives even further into gospel and its religious roots releasing Jesus is Born on Christmas Day. The radiant album is Kanye-less: he doesn’t perform in any of the songs and there’s no trace of his past work except the “Ultralight Beam” cover, “Fade” echoes in “Follow Me – Faith,” and “Father Stretch,” a song that strongly originates from “Father Stretch Pt. 1” from The Life of Pablo.

Jesus is Born is produced by Kanye West but not published through his label (GOOD Music) or even under his name; it’s under the Sunday Service Choir. While Kanye West created and leads the group, the absence of his self throughout the album almost entirely is an important new direction for him.

I make these distinctions not to disparage Kanye’s previous work but to illuminate how different this new direction really is for him. His collaboration with the choir and choir director, Jason White, is uplifting, inspirational, and ultimately joyous; it’s a church service non-religious people could find themselves participating in.

Here is a quick run through of a few songs:

“Revelations 19:1” begins with some spoken word from the choir director and choir—this occurs in almost every song in the album and gives the album a bright personality—then transitions into a high tranquil melody on piano behind a soft but sharp choral performance. The piece then swells with thunderous Hallelujahs accompanied by robust horns and percussion that end the piece with a tone of resounding triumph.

“Sunshine” is strung together by its absolutely electrifying female soloist; she zaps with biting staccato and exhilarates with her longer held-out vocalizations. A vivacious call-and-response between the choir director’s spoken word and different sections of the choir support the soloist. The instrumentals include some jazzy bass and groovy drums that rev up the thrilling high-energy of the piece.

“Father Stretch” is a longer running development from “Father Stretch Pt.1” from The Life of Pablo. The piece is elaborately percussive, due to its rap/hip-hop origins. The resonant harmonies of the choir are punctuated with reverberating instrumentals of bass, drums, and horns. The choir cheers on these instrumentals with upbeat exclamations.

Vulfpeck recently released a live album of their performance at Madison Square Garden on September 28th—Vulfpeck Live at Madison Square Garden—featuring animated and jovial renditions of hits like “1612,” and “Wait for the Moment” with Antwaun Stanley and “Back Pocket” with Theo Katzman. The live album is bursting with feel-good, care-free personality, like the band themselves. Here’s the link to a video of the performance:

John Lennon may be gone—39 years now—but he will never be forgotten or unheard. He is survived, not only by his wife, Yoko Ono, and children, Sean and Julian, but by his generation of fans who have passed down his and the Beatles work onto their kids, keeping what Lennon imagined very much so alive.

Here are Lennon and Ono appearing on the Dick Cavett show in 1971. It’s a fascinating watch. Enjoy, and once again, Happy New Year! May it be filled with much music, joy, and imagining.

Lead-In Stock Photo Image Courtesy of Carl Bjorklund / Shutterstock.com – “GOTHENBURG, SWEDEN – AUGUST 13 [2011]: Kanye West performs at the Way Out West festival on August 13, 2011 in Gothenburg, Sweden. West rose from a cloud of smoke in the crowd for the first song of the night.” 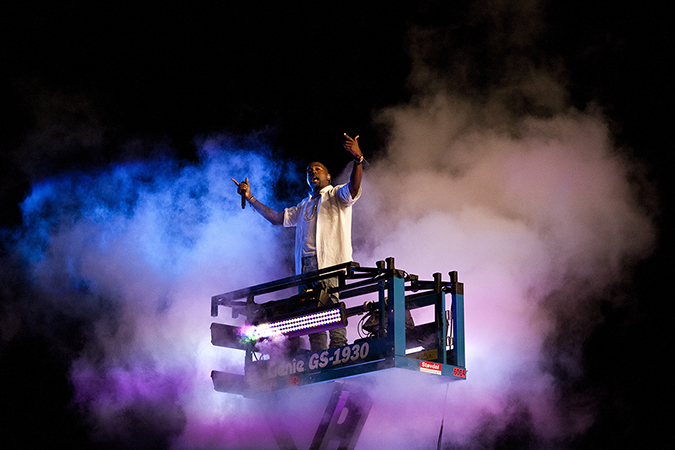