I recently spent a week visiting Trentino and Südtirol, which was a terrific experience. It was a region of Italy I’d never been to before, but I am very much hoping to return, and sooner, rather than later.

We flew into Milan, rented a car, and drove to Trento (anglicized as Trent, as in Council of Trent, which took place there in the sixteenth century and kicked off the Counter-Reformation). Trento is a beautiful city, and a bit off the beaten path when it comes to tourism. There’s no very good reason for this as far as I can tell, at least if you’re interested in history…it was the ancient Roman city of Tridentum and has a beautiful city center full of Medieval and Renaissance architecture (and very few cars, making it a excellent place to walk around and explore). It was most recently part of Austria and Austria-Hungary before being annexed by Italy in 1918. We visited the Buonconsiglio Castle—gorgeous, enormous, full of frescos, historical artifacts from the entire region, and lovely grounds. The kids in our party loved MUSE, the science museum, as well as the playground nearby, which had a zipline—something we’d never seen in the USA, at least not without supervision and signed waivers and releases. We took a nice walk along the Adige River to get some exercise and see the beautiful view. (The Funivia Trento Sardagna, a cable car which makes for a popular outing a short walk from the town center, was unfortunately out of order that day, so we had to make do.) 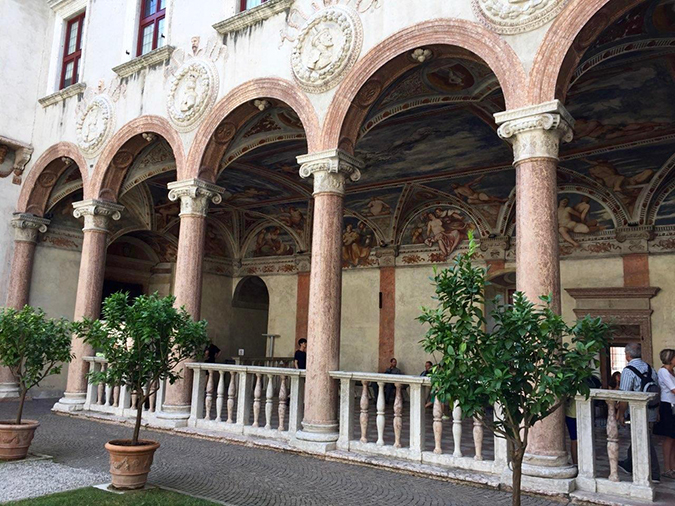 We enjoyed the food (it’s hard not to, in any part of Italy) and also the local wines—particularly the Franz Hans Manna Vigneti delle Dolomiti, the Casata Monfort Gewurtztraminer Trentino, and the Pravis Teramara Sauvignon, all delicious and refreshing on a hot day.

It’s not a long drive (and it’s an easy train ride) to Bolzano, which is absolutely worth visiting as well. Bolzano is mostly Italian, but has a German-speaking minority (about one a quarter of the population has German as a first language). Fortunately for the out-of-town visitor, it is quite easy to get along in English, and even easier if you know a smattering of Italian and/or German. (Restaurants often offer menus in both Italian and German, which makes it easier for the English speakers to decode them, having two sets of clues.) Bolzano’s really at the crossroads of Italian and Austrian cultures, with bilingual signs and a walkable city center where it’s easy to find beautiful churches, lots of shopping, and appealing restaurants. We had an excellent meal under a tent at the Laurin Restaurant at the Parkhotel Laurin, where they were good enough to accommodate us with a lovely tasting menu dinner for 13 on rather short notice. We didn’t stay there, but it’s a grand old hotel (dating from 1910). The hotel grounds were gorgeous, too, with a rose garden, a heated pool, and art everywhere. I particularly enjoyed having a drink at their outdoor bar—I absolutely had to order the Americano molto sbagliato (because I have been known to be the very wrong American on more than one occasion) and to my pleasant surprise, it was actually pretty tasty.

One of the most fascinating things in Bolzano is, I think, the South Tyrol Museum of Archaeology, which is the resting place of Ötzi, (otherwise known as the Iceman), Europe’s oldest known natural human mummy. It was absolutely amazing to learn just how much knowledge has been gained due to the accidental discovery (by two tourists) of his body in the Alps in 1991. Ötzi was originally believed to have been a recently lost hiker, then perhaps a World War I deserter, but when an archaeologist examined the body, it was determined quickly that he’d died about 5,300 years ago. Having a well-preserved body from Europe’s copper age was an extraordinary opportunity for scientists to learn about the tools, clothing, diet, and even the medical treatments of his time. The museum is truly a window into history and culture, and more philosophical speculation about humanity and fate, and the series of extraordinary events that led to Ötzi’s preservation. 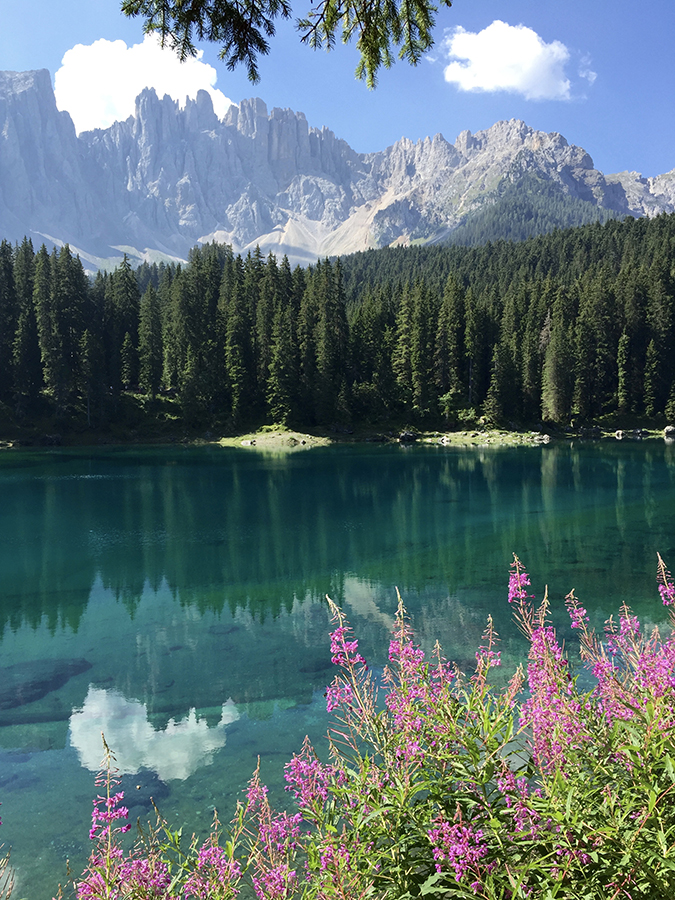 But there’s more to the area than city life…we also checked out the mountains and enjoyed some spectacular views in and of the Dolomites. Driving there is not for the faint of heart…mountain roads with multiple hairpin turns (and, if you’re like us, carsick children in the back seat) can be a bit intimidating. If this sounds like far too much trouble, you can hire a guide. We had a great experience with Italy’s Dolomites. Our guide drove some of our group in his car, and the rest of us followed behind in our rental. Lago di Carezza (otherwise known as Karersee) is considered to be of the most beautiful lakes in the Dolomites—we had no argument with that assessment. We had a walk around the lake (only possible in the warm weather months—our guide told us that the path was covered in snow and virtually impassable as late as April) and we were all amazed by the vibrant colors. The facilities were good, too: plenty of parking, clean restrooms, a tunnel between the parking lot and the road to ensure safe passage for pedestrians, and a small café and gift shop. (Of course, we had to stop for gelato. We always have to stop for gelato.) 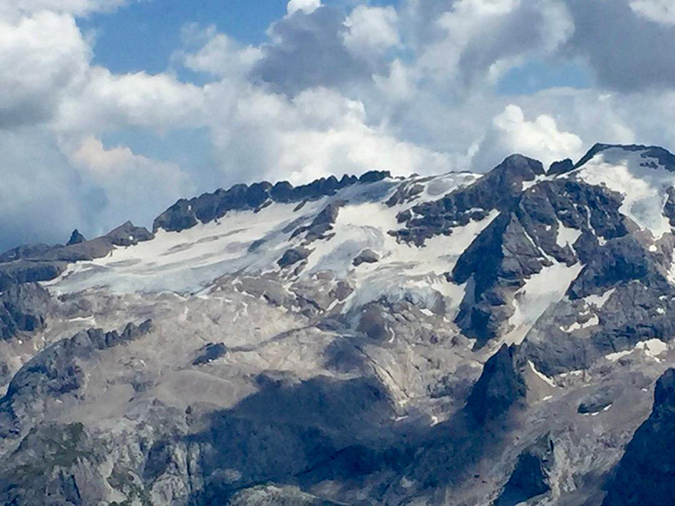 Next, the Great Dolomite Road—and 27 or so switchbacks later (but who’s counting?), we were at the Pordoi Pass. From there, we took the cable car to Sass Pordoi, at an altitude of 2,950 meters (9,678 feet.) This was phenomenal: we were on top of the world, or at least we felt as if we were. It’s usually chilly up so high, but as we were there in August, it was actually quite temperate…in fact, that day, it was much more pleasant on top of the mountain than otherwise. Whatever the temperature, the views were amazing in all directions. (If you are very fit, very ambitious, and are not traveling with an assortment of children of various ages, you can skip the cable car and hike up. This is not something that we attempted, or even considered, but to each his or her own.) 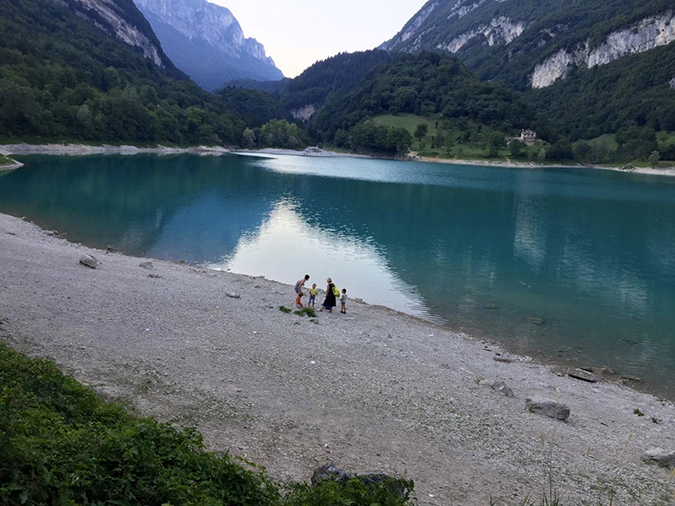 Another way to beat the heat in the summer is to spend a day relaxing in and by the water, and that’s exactly what we did toward the end of our trip. We took a drive (about an hour from our hotel in Trento) to Lago di Tenno, which was one of the most picturesque locations we’d ever had the good fortune to visit. It’s a vibrant, almost stunning, turquoise color and as tranquil a spot as you could ever wish for. It’s perfect for swimming, at least at that time of year, and there’s a small island you can make your way to, which was a grand adventure for the kids. There’s a small café with food and drinks, some picnic tables and restroom facilities, kayaks to rent, and plenty of people just enjoying the magic of the scenery and the fresh air. No one there was in a bad mood. (I honestly don’t know if it would even be possible to be in a bad mood on a sunny day at Lago di Tenno.) 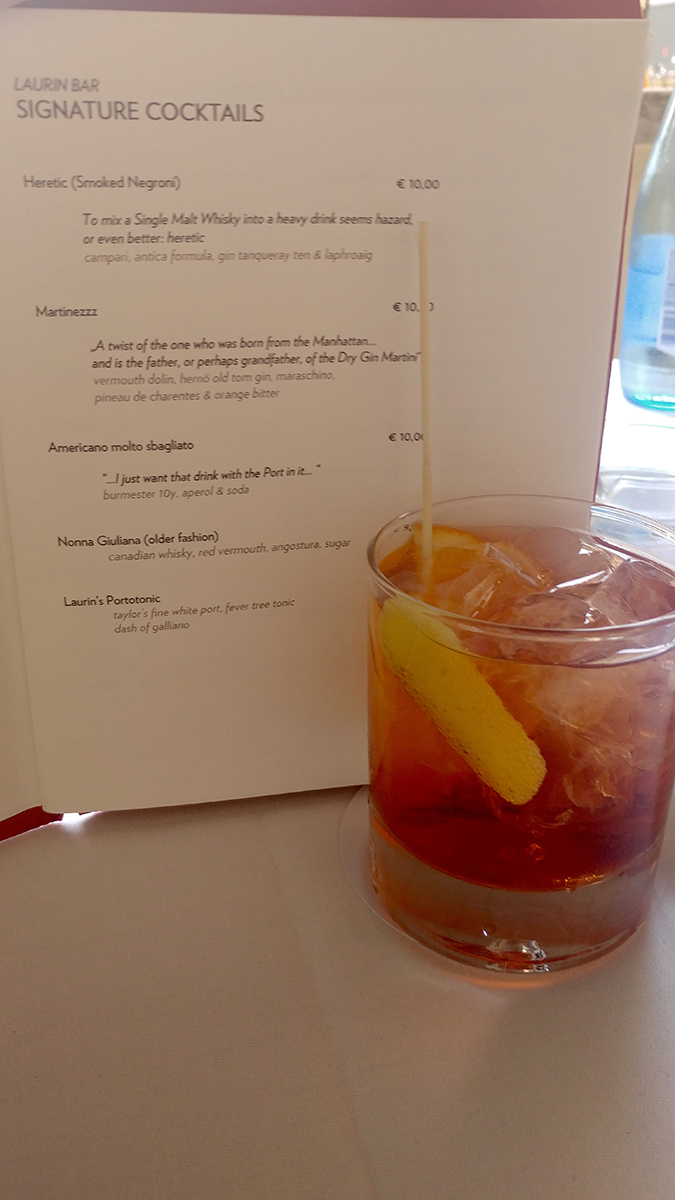 Alas, all good things must come to an end, and we had to pack up our things, say our goodbyes, and head back to the airport. With some regret, we picked up some good chocolates at the duty-free and settled in for the long flight back home. Arrivederci, Trento! We’ll be back!