Maggie Topkis is a consummate New Yorker, born, bred, and educated (largely) in New York City.   She’s a great conversationalist, with stories about everything from her acting days, to her life as a journalist, to her experiences as one of the founding owners of Partners and Crime (a mystery bookstore in Greenwich Village that had a run of nearly two decades before closing, sadly, two years ago).

She is the publisher of Felony & Mayhem Press, a very small company which she developed out of the frustration that so many good books were going out of print; she didn’t want to see them disappear.   So she’s bought up the rights to some older novels to introduce them to new readers, and has been publishing new fiction as well.

I had the good fortune to have dinner with Maggie at Annisa, an elegant and civilized restaurant in Greenwich Village, and here is (some of what) we talked about… 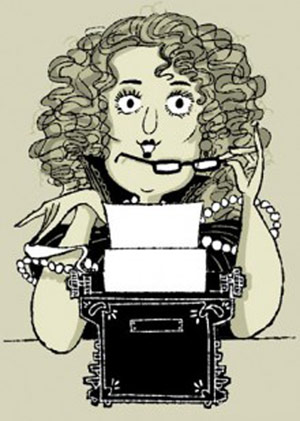 Well, I spent days making this insanely complicated recipe for beer-braised short-ribs, and in a fit of warm-heartedness, brought it all over to share with my friends. I hadn’t realized their teenage sons would be joining us for dinner. There are now no short-ribs left for me. This makes me very sad.

The Tall Guy, which stars Jeff Goldblum, as, well, “the Tall Guy,” which is his part as the straight man in a two-man show.  It’s a great send up of 1980s theater, especially Andrew Lloyd Weber, as he eventually ends up getting the title role in a musical version of the Elephant Man, featuring the immortal lyric (after the Elephant Man dies) “Somewhere up in heaven there’s an angel with big ears!”   Emma Thompson is great as his love interest.  The movie features singing underpants and tap-dancing elephants! How could anyone not love this?

Reinventing myself as a financial writer and bluffing my way into a job, despite not knowing anything about finance, or how to use a calculator, and having to figure out what a P/E ratio is.

I would have been braver, and had more confidence in a benevolent universe.

A guy walks into the bedroom carrying a sheep in his arms and says, “Honey, this is the cow I make love to when you have a headache.”

The wife, lying in the bed reading a book, looks up and says, “If you weren’t such an idiot, you’d know that’s not a cow.”

The guy replies, “If you weren’t such an idiot, you’d realize I was talking to the sheep.”

For various complicated reasons, I told that joke to 300 people at my mother’s memorial service. It killed.

I like John Grisham and Stephen King, and Kraft Macaroni & Cheese — but only the original version, with the cheez-powder, please!

My roommate during my first year of Harvard gave me two very good pieces of advice: “Don’t eat Drano“ and “Never make decisions during finals period.”  I’ve expanded that second one to cover periods of stress generally.

Well, I became a Stephen King fan after reading an interview with him and being just gobsmacked by his intelligence and thoughtfulness and decency. So he’d be up there. James Gandolfini used to be a regular customer of mine at the bookstore, and he was a sweetheart. And I’ll go to my grave yearning to be half as talented and gorgeous as Judi Dench. I realize that none of these people — with the possible exception of Gandolfini, and he’s dead — is what most people think of as a “celebrity,” but that’s what you get when you talk to a geek.

I believe that a cloud of evil hovers over the world and makes landfall from time to time.  In Germany in the 1930s, in China in the 1960s.  In Rwanda, in Cambodia, in Bosnia.  Absent some deeply bad stuff in the water, it’s the only explanation that makes sense to me for how entire populations go absolutely murderously out of their minds.

10. Last, but not least, is there anything you want to pitch, promote, or discuss?

Yes!  Felony & Mayhem Press, the Best in Intelligent Mystery Fiction.  You can visit our website at http://felonyandmayhem.com/, and we’d love to say hi on Facebook and/or Twitter, too.