Recently, I reviewed Jennie Vee’s EP Die Alone and the single “Never Let You Down,” and I can’t recommend this stuff highly enough. I hate to lean on musical references (as I took pains to mention in the review), but if you paid attention to late 80s college music, or 90s “shoegaze,” you ought to adore Ms. Vee. 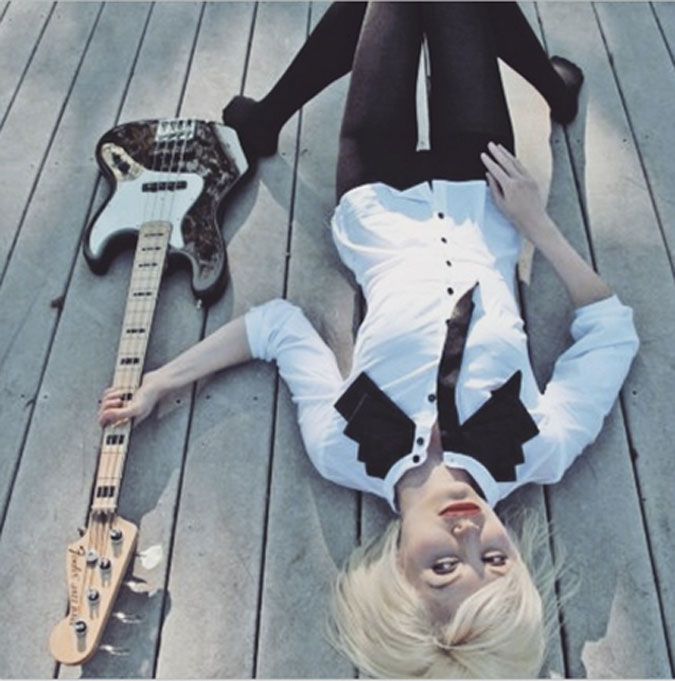 Does the acronym JAMC mean anything to you? Good. Then, like us, you’ll definitely enjoy Jennie Vee’s music.

I was able to strike up an email conversation with Ms. Vee, and we were able to cover topics as far ranging as her influences, her favorite place in the world, and, somewhat surprisingly, Courtney Love. 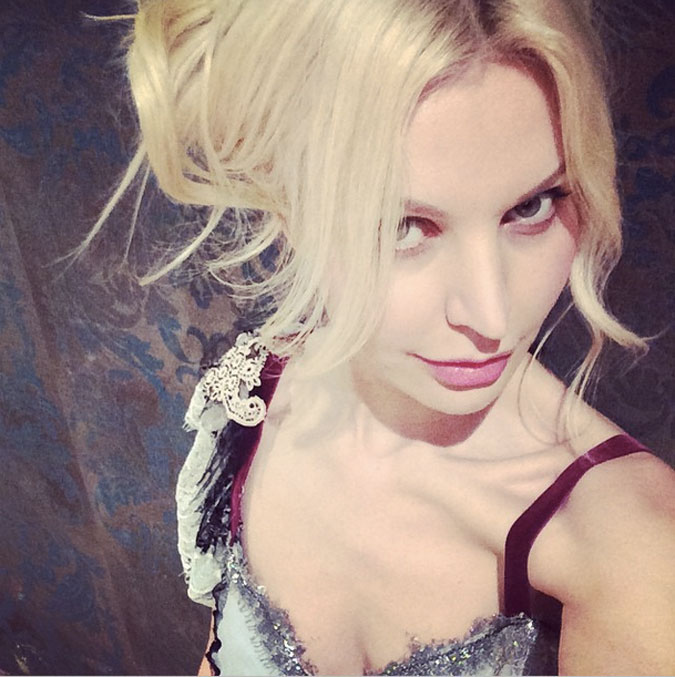 CW: During which American president’s term were you born?

CW: Researching your music online, your site, Soundcloud, and Bandcamp primarily, it sounds like you are a Toronto-born artist who now calls NYC home.  How did this transition take place?  When did you move?  Any specific reason(s) for doing so?

JV: Yes, I am from Canada.  I was actually born in a town in Northern Ontario, but did spend about 10 years in Toronto. It was my home over the course of my life.

As a kid my family moved there and I loved the newfound freedoms of a big city: public transportation, a great radio station, and more importantly – concerts.  I was devastated to move back up north on the cusp of my high school years and I became the only “goth” in Sudbury, ON.

Needless to say as soon as I could, I moved out on my own all the way to England.  After a few years there I came back to Toronto, then Los Angeles, then Nashville, and now New York City.  I have love affairs with cities and when I tire of a vibe or experience I move on.

CW: Not making any connections here, but I am listening a lot to another band called Hunter Valentine from Brooklyn, who also started in Toronto…  If I dig further, am I going to come up with a TO NYC pipeline?  A hipster underground railroad?

JV: I’ve never heard of them.  It’s been awhile since I lived in Toronto and I was never part of a “scene,” let alone a hipster underground.  Even amongst so called “undergrounds” I’ve been the outcast.  I have always done my own thing and been a bit of a loner and introvert so I truly can’t comment on the Toronto music scene or even the New York City music scene (where I have lived for three years). 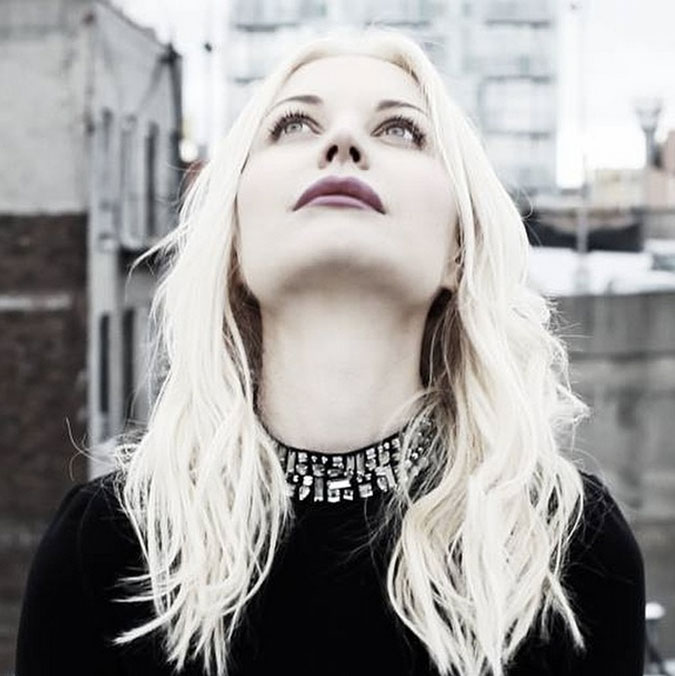 CW: How long have you been writing songs?

CW: What instrument(s) do you play?

JV: I play bass and guitar.

CW: I am not going to list off bands/musicians I am reminded of when I am listening to Die Alone or “Never Let You Down” as a lot of reviewers seem to trip over themselves to do that.  As an obvious music fan in addition to an artist, do you tire of being described in terms of what/who you sound like?

JV: I get tired of lazy comparisons.  For instance, comparing me to Blondie is lazy, I’m blonde and I live in NYC but that’s the extent of it.  For the most part the comparisons have been spot on, and I can’t tire of listeners picking up on vibes and soundscapes inspired by my heroes.  However, music consumption is a subjective experience. So If someone hears late 70s disco punk in my music who am I to say they’re wrong?  By the way, I’m not influenced by disco punk.

CW: I have seen lots of comparisons, but I would like you to pick your three biggest influences on the music you are making; musical or otherwise.

JV: The Cure, Echo and the Bunnymen, and Jesus and Mary Chain.

CW: You’re not on a label.  Do you give a shit?  Is that an outmoded thing, or still something an artist looks to accomplish?

JV: My 2nd EP is coming out on a label in the UK + Europe called 25 Hour Convenience Store.  It’s run by Gary Powell from The Libertines and I couldn’t be more thrilled to be working with him.  We’ve been friends for years and at this point, that’s the kind of relationship I want with my label.  This past year has been amazing for me to be sans label and still be able to connect with so many people and share my music totally independently, but the upcoming EP will be awesome because there will be a
physical tangible release along with the digital offering. It’s always a thrill to HOLD an album!

CW: Is your music currently available anywhere besides iTunes & Bandcamp?

JV: It’s on Amazon as well.

CW: In my thoroughly amateur internet stalking, I came up with two concerts you have played: a recent show in NYC, and one last summer at the Troubadour in London.  Do you tour?  Future plans on hitting the road?  Favorite places to play?

JV: I spent many, many years on the road in past projects.  With the release of my last EP, I just did select dates in the UK, NYC and Los Angeles.  Alan McGee from Creation Records heard my first song from the EP and invited me to come over to play his chapel in rural Wales.  That’s something you don’t say “no” to, so I booked a gig in London as well and crossed the pond.  I have always had a strong connection to the UK and I have to say it’s my favorite place in the world to be.

CW: I took to Die Alone right away.  Recently, you released the track “Never Let You Down.”  Lyrically, the latter almost seems like a response to the former.  Musically, “NLYD” is even lighter in feel as well.  Was this intentional?

JV: Thank you.  Making music in itself is an intentional act, but the content and tone of a song is never really completely within my control. It’s a purely organic experience.  What happens happens.  I can steer the boat in a certain direction, but along the way I will encounter tidal waves and storms that I didn’t expect; or a totally calm and serene, waveless sea.  My songs are a reaction to both the internal and the external conditions.  I look back on the trying time I was going through when I wrote Die Alone and I find myself grateful for those times I didn’t think I would get through, because otherwise I wouldn’t have written those songs.

CW: What is your next step musically?

JV: I’m finishing up mixing my new EP and creating an epic video with my friends Katrin Albert, an amazing Brooklyn based photographer and cinematographer, and Tamaryn, who has a fantastic new album coming out this year.  Aside from that I am still writing every day and at this point have enough material for a full length album, aside from the 2 EPs.

CW: I am assuming you have a digital music player.  Put it on shuffle, and tell me what the first 5 songs are, please 🙂  No cheating, either.  Sometimes Linda Ronstadt comes up on mine, too.

CW: What is the last music you purchased?  What are you listening to in general?

JV: Nick Cave’s Push the Sky Away is the last album I purchased.  I also grab a few things here and there on bandcamp.  In general, I listen to the music I’ve always listened to.   I had a Liverpool music night with friends a few weeks back and we listened to The Teardrop Explodes, Julian Cope, The Wild Swans, The Lotus Eaters, The Bunnymen.  I have a giant playlist called “Jenniebritpop” and although “Brit Pop” is a label of a very specific time in British music, I keep anything “from the island” in that playlist.  It’s a go-to of mine. 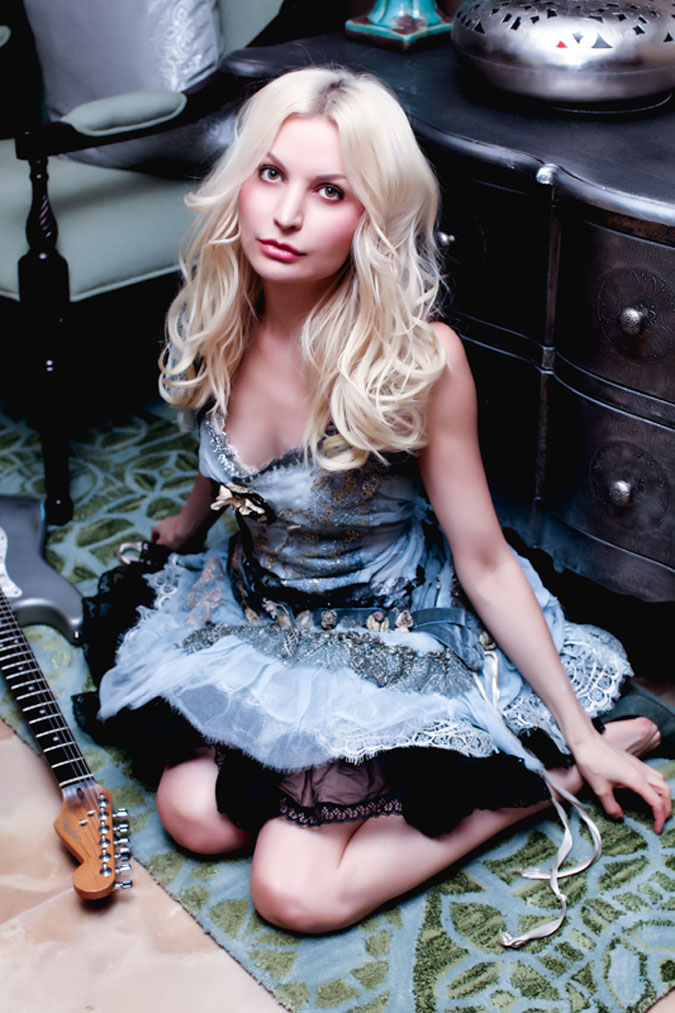 CW: Courtney Love.  You indicate that you have been “styled” by her.  Tell me about it?  How did this come about?

JV: Courtney is a friend.  She’s super intelligent, hilarious and on point with everything, so when she said “Jennie you’re always wearing black, and it’s too boring!” I listened!  While she was here in NYC doing an amazing Off-Broadway play, we were discussing a video I was about to shoot and she had a suitcase of the most incredible dresses she designed for her Never the Bride line sent over from her house in LA.

CW: #musicisachoice is something that I have been throwing around recently on Twitter.  I am interested in what you make of the phrase as a practicing musician.  I know what it means as a fan, but what about you?  Music is easier than ever to find & consume.  How does one listen to or make music deliberately, and does it even matter?

JV: I touched on this in a previous question- the act of creating or consuming music is most definitely a choice.  However, think about all the times we are exposed to music where it’s NOT a choice, in an elevator, a boutique, a doctor’s office.

As a New Yorker I tend to walk around with shades on and ear buds in to block out some of that involuntary exposure.  As a creator of music, like I said, I can only control what comes out of me to a certain extent – the act of creating it is deliberate but the result is often times a surprise which I something that inspires me to keep doing it.

I have my muses and when they speak, I listen.

So there you have it. Jennie Vee knows when to explain things, and when a sentence will do the trick.   She totally shut down my, cleverly hidden (cough), “how old are you anyway” question right off the bat in the interview. I have never read “I’m Canadian” as “up yours, pal” before, and I totally love her concise responses.

She rocks, and her iPod shuffles are cooler than yours. Or mine, apparently. What are you waiting for?