I met Alexander Campos at the bar at a benefit event for the Morris-Jumel Mansion (he’s the Secretary of their Board of Trustees). He told me that he’s spent his entire career in arts organizations and that he was the Executive Director of The Center for Book Arts. Since I’d never before heard of The Center for Book Arts, first of all, I wanted to know exactly what “book arts” means: does it refer to books as an art objects in and of themselves, or is it art created using books as a medium? The answer was yes. Both of those things.

As I was intrigued, I asked if he’d mind showing me around the Center, and as he is a good sport, he agreed, so I went to visit him there a few weeks later to see what book arts were all about.

I found myself in a busy and crowded but inviting space in the Flatiron District. It’s part art gallery, and there were two Featured Artist Projects on display, both rather original and intriguing.

Colette Fu’s project, We Are Tiger Dragon People, consists of a series of elaborate, one of a kind, photographic pop-up books depicting ethnic minority groups in China. She originally focused her work in the Yunnan Province, where her family is from, and has subsequently expanded her focus to other geographic areas. Her intention is to use her skills as an artist to spread knowledge of the cultural richness of these tribes and their ways of living. The work is gorgeous, colorful and vibrant. 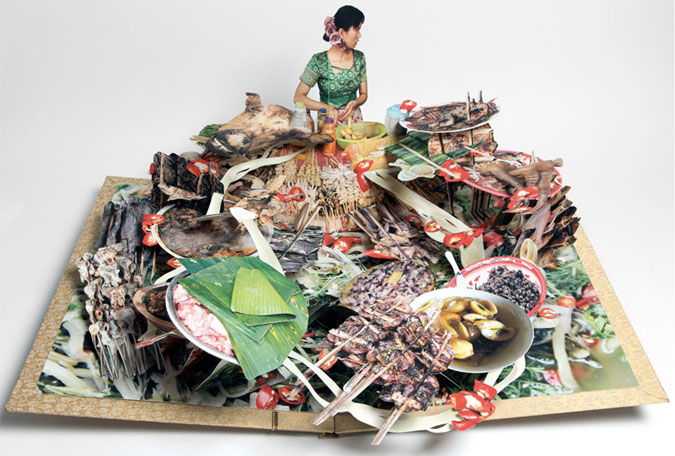 The other exhibition, John Jacobsmayer’s  More Than Human, is a series of over 80 wood engravings cut from cross-sections of the same tree, a forty year old maple. The image sequence is inspired by an American Sign Language translation taken from James Dickey’s poem, “Sheep Child.”  The images convey signs as performed by a collection of strange creatures, including monsters and androids. His work is intricate and fantastical, dark, disturbing, and strangely alluring.

The Main Gallery Exhibition, titled Redux, is a survey of past artists who have had Featured Artist Projects over the past forty years of the Center’s existence, as well as a few works that are from Center’s permanent collection.

But that is not all, oh no, that is not all…there was also an active bindery, with a workshop taking place in which students were learning the traditional art of bookbinding, making pamphlets and flat books, and getting familiar with the materials and techniques of the trade.

Also in the bindery was a craftsman (who rents space at the Center) working on a gorgeous red leather-bound volume with gilt ornamentation.

And on the other side of the Center, a group of NYU graduate students were on a field trip with their professor to the printshop, to learn a bit about letterpress printing: inking, imposition, impression, typefaces, paper, and so on. The technology has not changed a great deal from Gutenberg’s day, and was widely considered out of date by the 1980s, due to the proliferation of computers in homes and offices. But for many, it has a timeless appeal.

While this was all going on, Alexander was kind enough to answer my questions, as follows (edited and condensed for clarity): 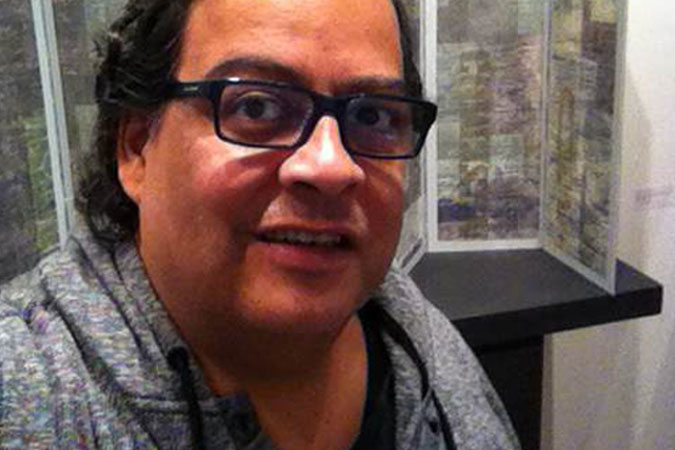 What led you to this job at the Center for Book Arts?

I have a background as a museum professional; I studied art history and have a Master’s degree in arts administration. I’ve worked at four different museums and have cultivated donors…I used to do programming for donors, taking them on tours and site visits, including educational trips to art fairs and museums. I’ve been here for the past ten years.

And how did you get involved with the Morris-Jumel Mansion?

I was at a dinner party in LA.  I was there sometime in the late nineties for the American Association of Museums [now called the American Alliance of Museums]  conference and we were at the Huntington Library,  a beautiful museum in San Marino.  I was sitting next to the President of the Morris-Jumel Board at dinner, and she recruited me.  It was an experience that really combined my love for museums, art, architecture, and books.  The Morris-Jumel Mansion is an amazing place, and I can’t believe it’s not more well known. 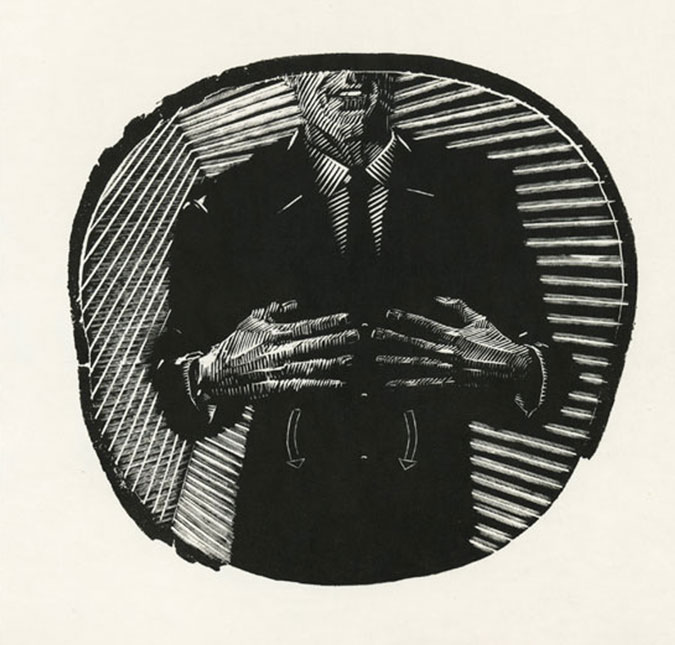 Is the Center for Book Arts unique?

It was really the first organization of its kind in the United States. It has become a model for, and an inspiration for, other organizations like it, in Chicago, San Francisco, lots of places. Many times these groups are part of a university, others are independent non-profits like we are. People from these different organizations get together at conferences and share ideas.

What are some misconceptions people may have about book art and its history?

Gutenberg was, of course, very important, but the story people know about how that printing of the Bible led to democratization of culture and greater literacy: in reality, it took a lot longer, and was much more of a complicated process. The print runs in those days really weren’t very large, they didn’t reach the masses. It wasn’t really until the 20th century that books really became mass produced. 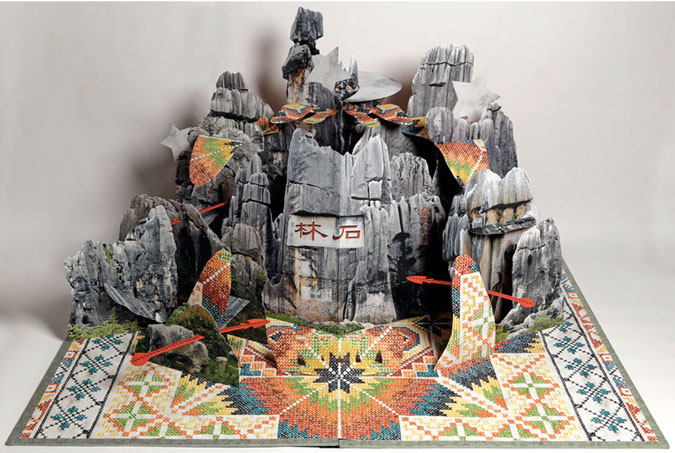 When technology changes, I know that something is gained, and something is also lost. Creating books in this traditional way is expensive, and inefficient, and slow, but it also allows you to do beautiful work here. Do you ever incorporate newer technology at the Center?

We try to keep what is good about traditional printing and book binding, but we do incorporate more modern technology. Some courses use design software to create polymer plates to print rather than using hand typesetting, but we always teach hand typesetting before incorporating design software in the curriculum. We try to take the best of what we can from the old and the new.

Are there any controversies or high or low moments that have occurred at the Center?

Every job has its challenges, and its opportunities.  Surviving them makes you stronger. Everywhere there are personality conflicts, excitement, people being overworked, and stressed. We have financial problems, like most non-profits. 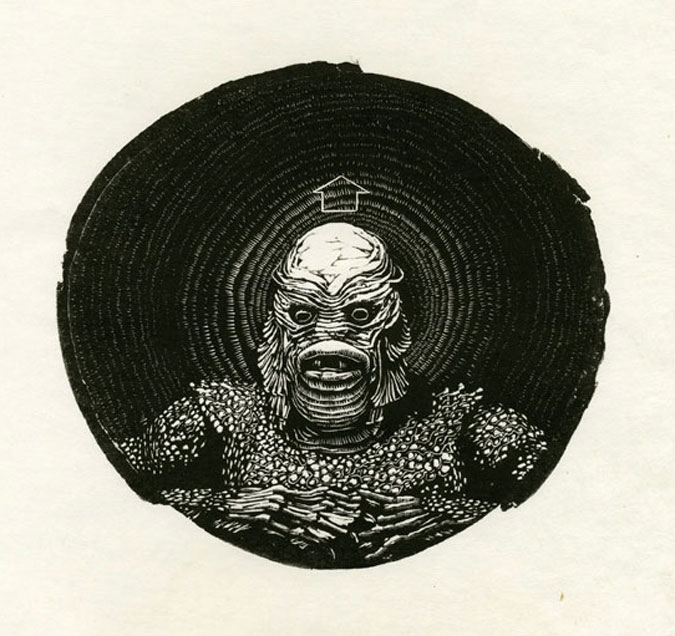 For people living in or visiting New York City who love books, what other places do you recommend they check out?

There’s an art gallery called Central Booking which features artist’s books.  And the Morgan Library, which has amazing books and manuscripts.  And Printed Matter, in Chelsea.  And the main branch of the New York Public Library,  which always has a book art show on the ground floor.

What’s the funniest thing that has happened to you this week?

Here at the Center for Book Arts we were joking about creating a soap opera and either calling it “The Leaves of Our Lives,” or “As the Page Turns.” 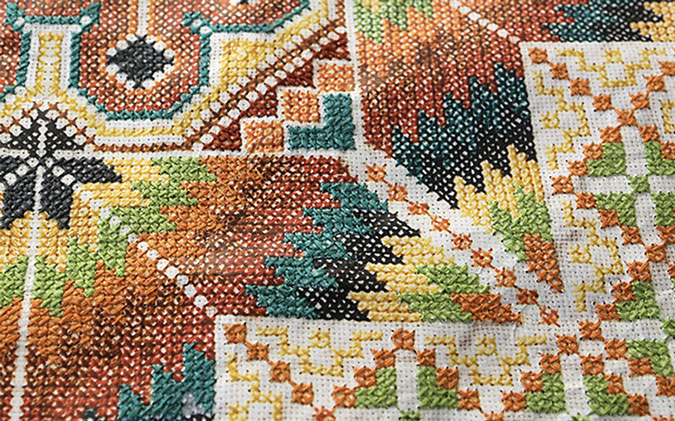 Chariots of Fire…it’s about belief and strength and being true to commitments.

Maybe driving through the Atlas Mountains in Africa?  Or driving from LA to Cabo?  But I think it was probably leaving the west coast to come east for college. 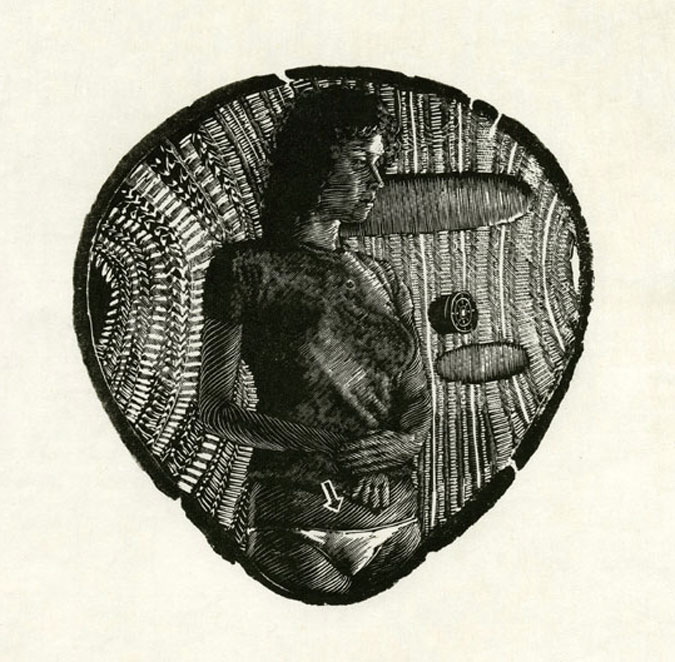 I don’t regret anything I’ve done. But if I had my life to live again, I think I’d cut losses sooner.

I’m actually a shy person. I’m not afraid of talking to people on stage, but I’m reserved in approaching people.  And I’m impatient.

I am also a person of extremes.  I either do nothing at all or I run around with my head spinning.  I’m not good at moderation. 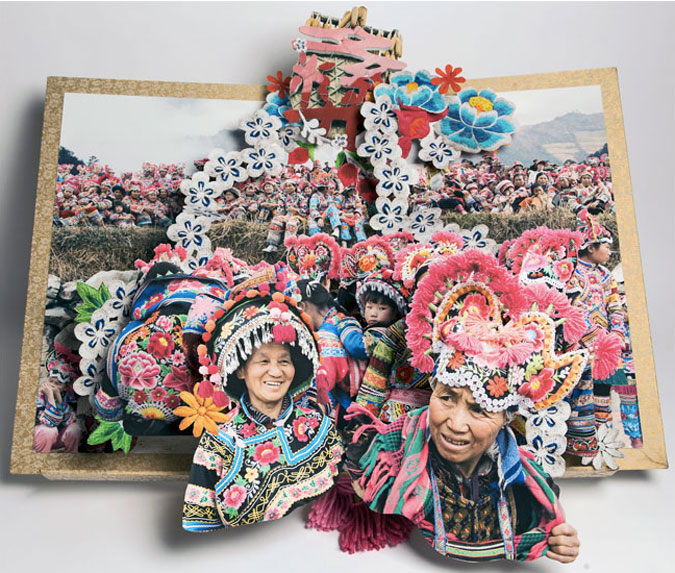 I think it is important to be patient. Everyone doesn’t think or work or do things at the same speed.

The Stranger by Albert Camus.  It’s relevant today, more than ever: with the conflicts in the Middle East, Korea, Africa, South America, misunderstandings between cultures, and preconceived notions rooted in the unknown. 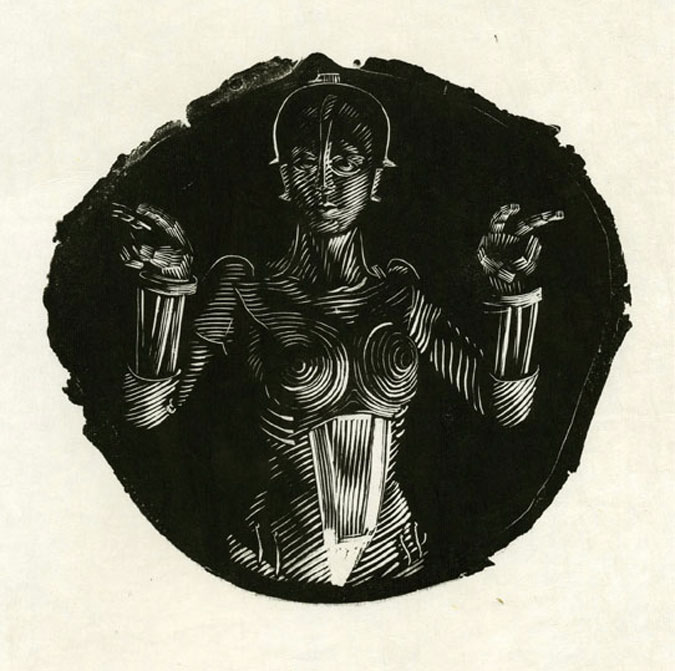 I never remember jokes! But here’s one:

Two men meet on a street corner and decide they want to go into the local bar for a drink. But one of them has a dog with him and knows they won’t let him in with his pet.

The other man says, “No problem, just come in with me and tell them it’s your seeing-eye dog.”

The first man thinks this is a reasonable plan, so he puts on a pair of dark sunglasses, and they both walk into the bar.

The bartender says, “Hey buddy, you can’t bring that dog in here.”

The man with the dog says, “But I’m blind, and this is my seeing-eye dog!”

The man, thinking quickly, blurts out, “Oh, man! You mean they gave me a Chihuahua?!?”

Eggs. I don’t like the look or smell of an open egg. Particularly sunny side up eggs, they look like eyes staring at you. 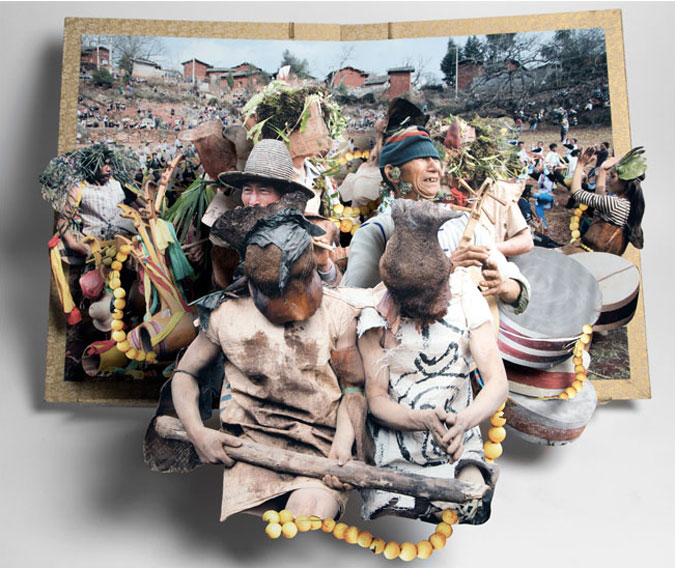 Yes! Come and visit the Center for Book Arts:

This year is our 40th anniversary.

We have classes and workshops for people who want to learn these traditional arts (you don’t have to be an artist, anyone who is interested may sign up), and we offer our basic courses either as intensive one-week classes or one evening a week for a longer stretch of time: http://centerforbookarts.org/events/category/classes/

We have special events, lectures by artists, panel discussions. We’re a membership organization, so you can join: http://centerforbookarts.org/support/join-renew/

For poets, we have a yearly poetry competition. Each year we have an established poet choose a winner, and the winner’s work gets made into a beautiful chapbook, with only 100 printed. The author gets ten of them and we sell the others at the Center. You don’t have to have been previously published to enter: http://centerforbookarts.org/opportunities/for-writers/

And we’re having our annual benefit coming up on April 10th: http://centerforbookarts.org/support/benefits-galas/

It will be a party right here at the Center. Come and have a look around, there will be appetizers and three kinds of martinis. 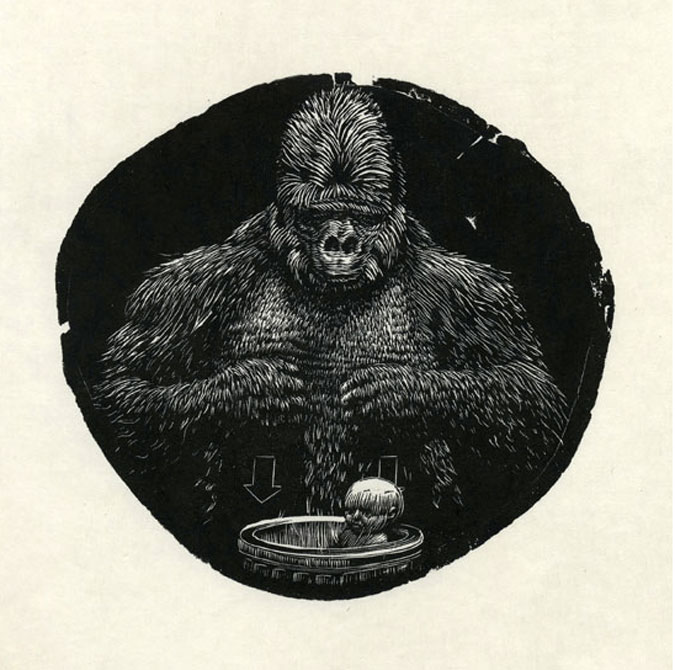