The first rule of Flight Club is you should talk about the band.

Yeah, we know, a lot of other writers have probably said the same thing, but seriously this is a solid find, and we’re willing to back this band on the rise.

Flight Club’s sound, at least to us, brings us back to the high-energy bounce of the 1990s, including the likes of Archers of Loaf, Better Than Ezra, Collective Soul, Hagfish, and Superchunk.

But Flight Club is not bowing down to the pop and indie acts of yesteryear.

Just listen to Flight Club’s first three songs on their debut album Until The Sun Drowns and you’ll see they’re excelling and carving out a sound all their own.

We can’t wait for more.

In the meantime, we’ve thrown some questions over to the band.

Stepping into the ring: Sam Tucker, the band’s guitarist.

My Dad was a musician and every year we had a Halloween party where all of our family friends would come celebrate and play music together til well after I was made to go to bed. Some of my earliest memories of loud live music was falling asleep to my parents’ friends jamming late into the night and me being upset that I had to go to bed because I was like 6.

There’s nothing specific that comes to mind as a huge embarrassment, but one time when we were on tour with West Means Home, playing in Georgia, Charlie fell off a monitor and landed very ungracefully on his ass. It was a smaller show too, so everyone saw it and that definitely accentuated the situation. It was pretty funny for the rest of us though. Only thing he hurt was his pride.

I mean obviously just having the opportunity to play shows as a career is all I could really ask for, but I love how travelling is such an integral part of that. Even if I wasn’t into music, I know I would want to be travelling and seeing as much of the world as possible. Waking up in a new city everyday because of the job you always wish you had is one of the warmest feelings I’ve gotten to experience. Also the obvious dislikes are being away from loved ones and the inconsistent sleep schedule, but honestly even those things can just add to the adventure of it all. It’s such a different lifestyle and world to put yourself into, so even some of the hardships are looked back on as good memories that I can learn from or just laugh at.

Plan 9 is the staple of our hometown in Richmond, VA. Great selection and cool vibe all around. But my personal favorite is probably Creep Records in Philly. We played a show there in 2019 and I loved that you could be watching a rock concert in one room and shopping for vinyl in the next. It was a cool way to see the collision of performance and retail that wasn’t just a merch table.

This is different for all of us, but for me personally it would probably be “By The Way” by Red Hot Chili Peppers. It’s different from my usual preferences but it’s hard to think of any record that has impacted my life the way that one has, that I still listen to regularly. It just showed how much more that band could be as artists than just the aggressive funk sound that they were notorious for at the time. It taught me a lot about writing music to say something meaningful and express complex emotions through sound. It also had a big effect on my desire to never be pigeon-holed as a musician. If I want to make a certain style of song, I don’t want to be told it can’t work because it doesn’t fit the “brand.”

If the band was all there and none of us had a clue, we’d probably call Adam who runs our label and apologize for whatever we did, even if we weren’t in any trouble. Better safe than sorry. 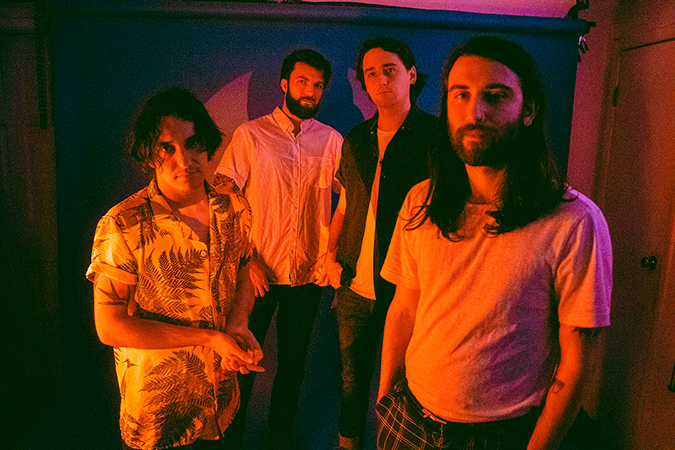