Where to start?  Let’s begin with the vinyl itself.  The packaging is spectacular. 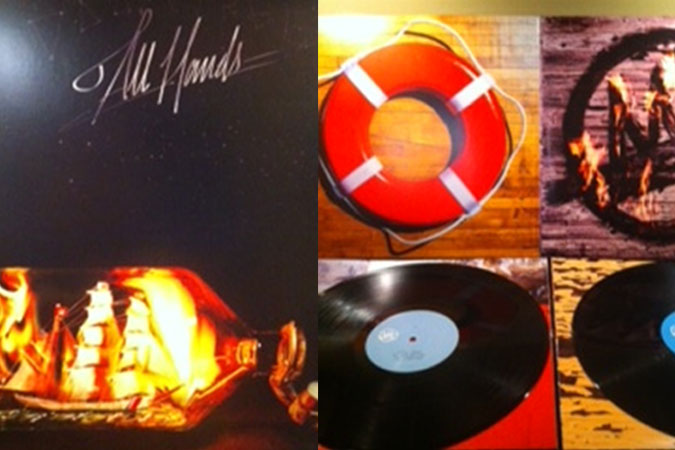 I wish I had sprung for the “deluxe” preorder now; with its colored vinyl and the little real-life ship in a bottle included.  Either way, A+ all around.  There is a consistency to the maritime imagery; decaying and doomed.  Flames lick at the deck, but sometimes you need to sink your ship in order to make it on your own.

Doomtree is a work in progress, as far as I can tell.  You had the earliest tracks, the False Hopes series, the s/t album, and then No Kings. Holy shit, No Kings.

No Kings is all anthems, all the time.  There is an immediate swagger to the album that doesn’t let up through 46 minutes of gang chants, and rhymes about writing the rules.  It’s military-grade confidence that drives the songs, along with a palpable love of one another.

Which bring us to All Hands; a horse of a different sort.  It grabs you by the collar like previous albums, but for very different reasons. I won’t say that the swagger is gone (because it isn’t), but it is tempered with an overwhelming sense of claustrophobia and impending doom (it is right there, in their name). 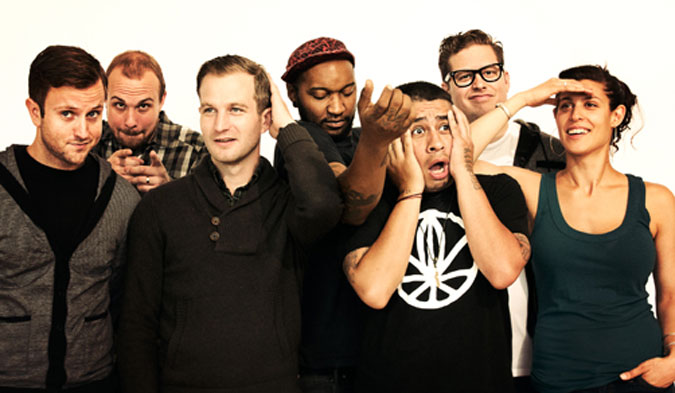 There’s some uncertainty, too, shot through the incredibly consistent soundscape of the seediest arcade in the world; listener lying on the floor, undiagnosed aneurysm blending and warping all the beeps and blips together with a low-level thrum.  Producer/DJs Lazerbeak and Paper Tiger have clearly outdone themselves with All Hands.

The opening track, “Final Boss”, sounds like you just walked in on a simmering argument, and it sets the tone for the album.  Sims says, “you’ll know what you need when it slips by”, and that’s just it.  Age has given the Doomtree vocalists perspective to notice the pitfalls of getting older, along with the trap of acting like you are still in your 20s.  The tense production drives the point home.

On “.38 Airweight” P.O.S. muses, “Bernie Goetz, I been thinking about Bernie Goetz.  Bang, hit deck.  D.B. Cooper and EasyJet.  Bang, go west.  Find me a place that time forgets.  Bang, check out with best, and get rest in a real way”.

As soon as you know who D.B. Cooper and Bernard Goetz are, it isn’t hard to make sense of the lines and how they fit into the overall narrative.  It’s worth noting that Sims is “thinking about sinking ships” on the track.

“Gray Duck” (thanks for the tip of the hat to Minnesota) is somewhat unique to this album in that it is an total banger with swagger to spare.  I have no idea what Mike is on about in the first verse, but I want to memorize his lines so I can rap along in my car.  Boom.

I would call “Heavy Rescue” the biggest departure to the overall themes and sounds of All Hands.  It is, in the best ways possible, super poppy.  It feels hopeful, and gives the listener a chance to breath.

All Hands isn’t overly long, but it is so densely-packed with sounds and words that it can be a somewhat exhausting listen.  This isn’t a criticism at all.  I love the underlying skronky, murderous keys that you feel in your gut like on “80 on 80”, “Cabin Killer” and “Beastface” (which has a monstrous hook).

“The Bends” is explicit in its call to move on from the past, as is “Off In The Deep”; the latter has Dessa remembering, “every night went on and on and on, didn’t want to lace it all up tight, wanted to catch the falling knife”.

The album ends, appropriately, with “Marathon” with its hook of “when it all boils down, there is nothing but bones left”, and Mike pleads the listener to, “just remember that I lived”.  In the same track Cecil says, “it feels like a say anything moment, the reckonings are everywhere, the mezzanine’s closing”.

Is All Hands the sound of something ending?  I’m not sure.  Dessa sang about abandoning sinking ships on back No Kings’ “Boltcutter”. It’s like on No Kings Doomtree showed up at the party with every intention to own it, and they did.  All Hands has the band leaving the party at 3:00am, a little older and wiser, knowing that some bad shit might still go down, but it will be on their terms.

All Hands rewards multiple listens, and when P.O.S. abruptly ends the album with, “bash me till I’m burger, hashtag No Kings, crash y’all’s server”, it is mic drop moment.  It is a given that the mic will be picked back up, but it will be interesting to see what they do with it.

Doomtree is on tour.  Do yourself a favor & bangarang with them.