There are strikes on the streets of Paris and there’s nothing funny about it.

I mean the rails had limited service and a pregnant woman was forced to have a baby in a commuter car.

Your heart goes out to mother and child… but then again the same situation happened last year and the train operator gave that baby a free travel pass… until the age of 25.

I guess that’s a day in the life – the ups, the downs, and the sweet surprises in between.

“Every hooker I ever speak to tells me that it beats the hell out of waitressing. Waitressing’s gotta be the worst fucking job in the world.” — From Woody Allen’s film Deconstructing Harry (1997); production design by Santo Loquasto.

I met John Quilty, AKA Quilty, waiting tables in a restaurant on the Upper East Side of Manhattan when we were young actors.

Just like the Marriage of Figaro, we were two servants who worked for a count. In fact, we worked for two men who acted like two counts. It was traumatic.

Every single time I see Quilty we talk about some of our past experiences in the restaurant and then we just hold each other.

It was that bad. And Quilty was once a Guardian Angel in New York City in the late 1980s.

Quilty is no longer a Guardian Angel or a waiter.

He’s an actor and photographer and he takes the most beautiful pictures.

Quilty was in Paris recently as the still photographer for a traveling production of Le Nozze di Figaro (The Marriage of Figaro). 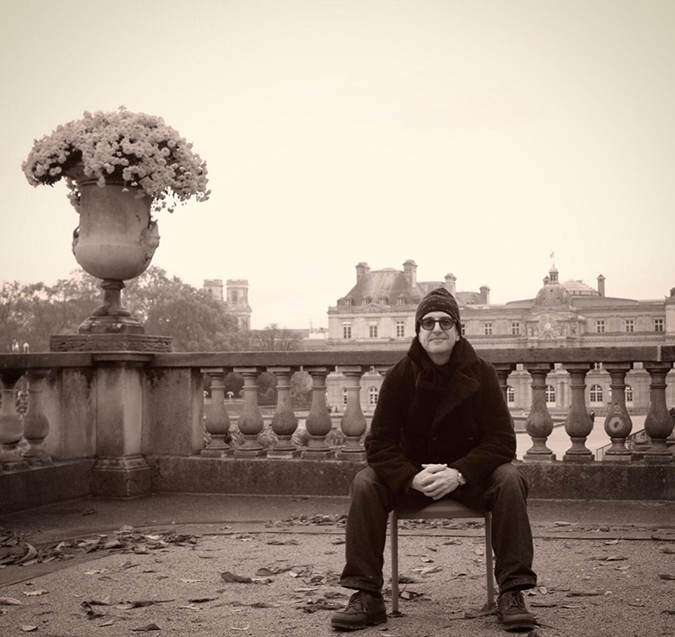 This latest version of Mozart’s famed opera was directed by American film director James Gray with costumes by Christian Lacroix and a stage by Santo Loquasto, the award-winning set and costume designer whose creations have graced Broadway shows and Hollywood films.

This is Santo (left), with a cast member:

Quilty, who’s been working for Santo, was able to get me a ticket for the “générale” (dress- rehearsal) at the Théâtre des Champs Elysées last month.

This is the stage:

For those who don’t know, The Marriage of Figaro is a fun comedic opera composed in four acts by Mozart.  It’s a masterpiece from 1784 about a countess teaming up with her servants to teach her husband a lesson about fidelity.

The opera’s overture is one of the most exhilarating pieces I have ever heard and just about everyone knows it … but I must admit that like for a minute I couldn’t shake the opening credits of Trading Places from my mind.

I am quite sure that when this movie first came out I thought the music was written for the movie.

Look how klasssy I have become.

As for the opera’s set? It was absolutely stunning but that is because it was designed by the talented Santo.

I mean his set designs are scripts within themselves.

I remember watching Blue Jasmine and Jasmine, played by Cate Blanchett, is working as a receptionist in a dentist’s office.

She’s wearing a dental wrap smock and, throughout that scene, we see her Hermes bag that just sits on her desk next to her phone. Super funny.

After the opera, I got to spend time with Santo and Quilty backstage and we walked around the theatre.  Quilty spotted a photograph and said, “Gloria, this photo reminds me of you!”

“Oh my god, that is AMAZING,” I said, with a super high pitch.

Mistinquett (1875 – 1956) was a flamboyant French singer and actress who if you believe Wikipedia… “was at one time the highest-paid female entertainer in the world.”

But what Wikipedia doesn’t know — and what prompted me to screech OMG — was that Mistinguette once lived in my Paris apartment or should I say I live in her apartment.

Also, sometimes she helps with my jokes. Just to know.

You’ll love it — and unlike Paris the trains should be working there.

That wasn’t my joke… it was Mistinguett’s.

Thanks, Quilty and Santo for the best seat in the house and a big “Bravo” to the cast.  What a glamorous night. C’était formidable.