The box office is certainly free-falling, so that must mean one thing: fall flicks have arrived.

Gone are the blockbusters of summer, the mass-merchandising cross-promotions, the thrill of bang-boom-yowza in mind-blowing 3D…flickering like strobe lights on screens three stories high!

Sure, the Oscar-laden, nitty-gritty is on the way, but first, some appetizers.

Sony’s African-American thriller, “The Perfect Guy,” M. Night Shyamalan’s “The Visit,” and the faith-based “90 Minutes in Heaven” will all be dished out this weekend, before fall’s heavy-hitters arrive next weekend with “Maze Runner: The Scorch Trials” and Johnny Depp in “Black Mass.”

“The Perfect Guy” cost just $12M and is poised to do solid business this weekend, possibly flirting with $20M as it enters 2,000+ venues.

Sony may not be competitive in the blockbuster arena right now, but they certainly know how to rub dimes together when dealing with genre fare, and that’s always been the case for them.  Ya gotta start somewhere, kid.

A Quick Lesson in Film Marketing 101:

Hmm. How do we want to sell this film, The Perfect Guy?

Now, where does your eye lead when you catch a glimpse of this poster? Bam!  Who needs a brassiere when you have a team of Photoshop experts! Are you sure this isn’t in 3D? 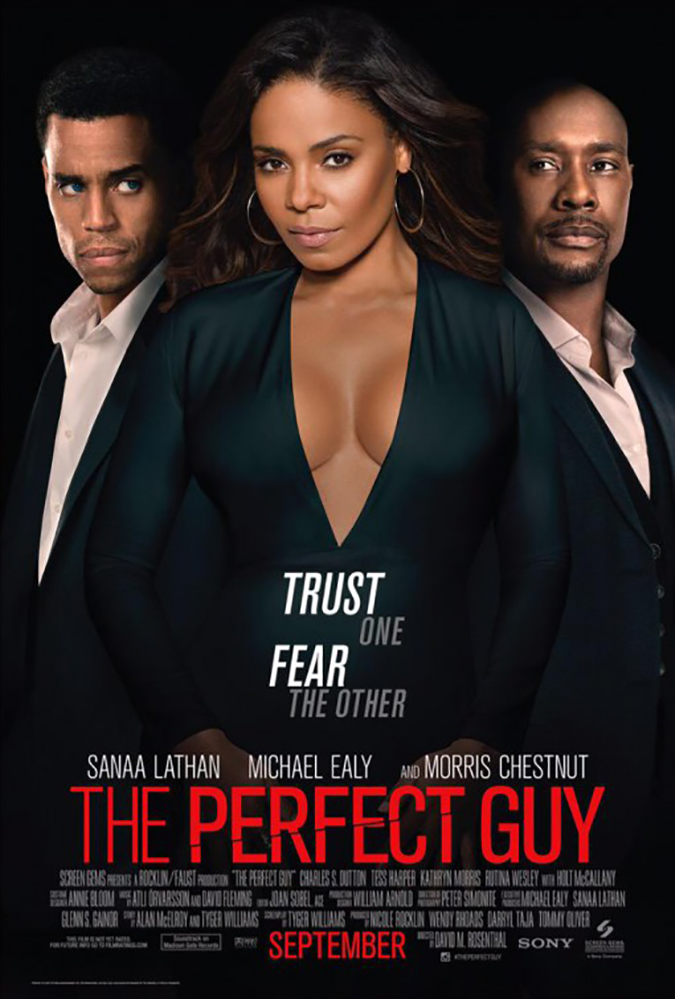 Let’s get one thing straight about M. Night Shyamalan–he’s still a highly marketable name, even if he hasn’t had a #1 debut in over a decade and even if you think that M. stands for Mud. His films have never debuted with less than $18M, and other than “Lady in the Water,” he’s never had an outright bomb.

Sure, “After Earth” and “The Last Airbender” were atrocious films masquerading as modern-day blockbusters, but they tallied up $243M and $319M respectively worldwide. Not enough to merit sequels, true, but hardly “Jupiter Ascending” or “John Carter.”

Hollywood is pretty quick to forgive, however, that’s not really the case here as Shyamalan holed up thousands of miles away from Tinseltown in his hometown of Philadelphia and made his twisted version of Hansel & Gretel, “The Visit,” on his own terms. Notably, for just $5M.

And now with Blumhouse in his corner, and budgetary constrains strapped in, Shyamalan is poised for a solid box office hit here.

Sure, gone are the days when studios routinely handed him $70M to make his specific brand of chill pill, but this looks to be a resurrection and return to form…in a genre he knows very, very well.

In 3000+ theaters, expect upwards of $15M+, which will have him making these micro-budget horror flicks from now until he’s six feet under…if he so chooses.

Samuel Goldwyn is the distributor of the PG-13 rated “90 Minutes in Heaven,” which, ironically, is over two hours. Someone really dropped the ball there. I blame the editor, but, to be fair, I’m sure there are a lot of billowy cloud cutaways and trips to McDonald’s (true story) that are extremely pivotal to the plot. Can’t wait for that Happy Meal tie-in. “Look Mom, I got the Jesus on a cross! Score!”

Now, I certainly can’t imagine sitting through this kind of film, hell, I close my eyes and cover my ears when surfing past the Hallmark Channel, but even if the running time was 90 minutes, this would be more like hell. That said, middle-America begs to differ, and after the success of “War Room” and films like “God’s Not Dead” and  “Heaven is For Real” has shown that faith-based audiences are a formidable demographic these days.

In 838 theaters, expect around $3M for “90 Minutes in Heaven” which stars Kate Bosworth, and Anakin Skywalker himself, Hayden Christensen. Seems he has seen the light and switched from the dark side. Powerful the agents in Hollywood are.

If you want to see  Christensen’s best film, I recommend checking out “Life As a House.” Really moving performance and yet another reason to love the vastly under-appreciated Kevin Kline.

Debuting in limited release this weekend is Sony’s “Wolf Totem.” Such a strange film for Sony to be distributing, but considering the pull this film had in China, it makes for an interesting diversion.

The China Film group financed the film for $40M and it’s already grossed over $120M ($110M in China) worldwide, so it really doesn’t need North America to be a success. Good thing, too. In 100+ theaters, it hardly has any marketing behind it.

Interestingly, the PG-13 adventure is directed by French filmmaker Jean-Jacques Annaud who brought us “Quest for Fire,” “The Bear,” “The Lover” and a film still banned in China, “Seven Years in Tibet.”

With the political dog-and-pony show in full swing, no better time for a movie about it. David Gordon Green directs Sandra Bullock and Billy Bob Thornton.

While it may be making festival rounds, director Jean-Marc Vallee’s latest, starring Jake Gyllenhaal, doesn’t arrive in theaters until next spring. With “Wild” and “Dallas Buyer’s Club” on his resume, Vallee is quickly turning into the most inventive and interesting indie director on the scene right now.  Can’t wait for this.