Is your music library sending out an SOS?

If so, you can rescue it with some good music from Dot Dash, a Washington D.C. band whose latest album, Searchlights, is out now on The Beautiful Music label.

As for Dot Dash’s style of music, there’s a lot to it — with pop, punk, and rockabilly rolled into one. Punk-a-pop-billy, anyone? No? Okay, moving on…

The band’s been compared to the Jam, Big Star and the Replacements, and however you categorize them, or whatever influences you hear, you’ll like ’em.

We didn’t have to hear a note to know this band was onto something special.

As for their touring resume, the band’s got serious flex, having played with the B-52s, Tommy Keene, the Fleshtones, Ash, the Psychedelic Furs, the Chameleons, the Dickies, Hugh Cornwell, the Monochrome Set, Stiff Little Fingers, Glen Matlock, the Bats, Sylvain Sylvain, Urge Overkill, the Drums, the Trashcan Sinatras, Frankie Rose, the Clientele, Drivin’n’Cryin’, the Empty Hearts, Matt Pond PA, Moon Duo, Chris Stamey, Wax Idols, the Supersuckers, and lots of your other favorite rock n’ rollers.

Please visit the group’s Bandcamp site to listen to some of their great tunes. 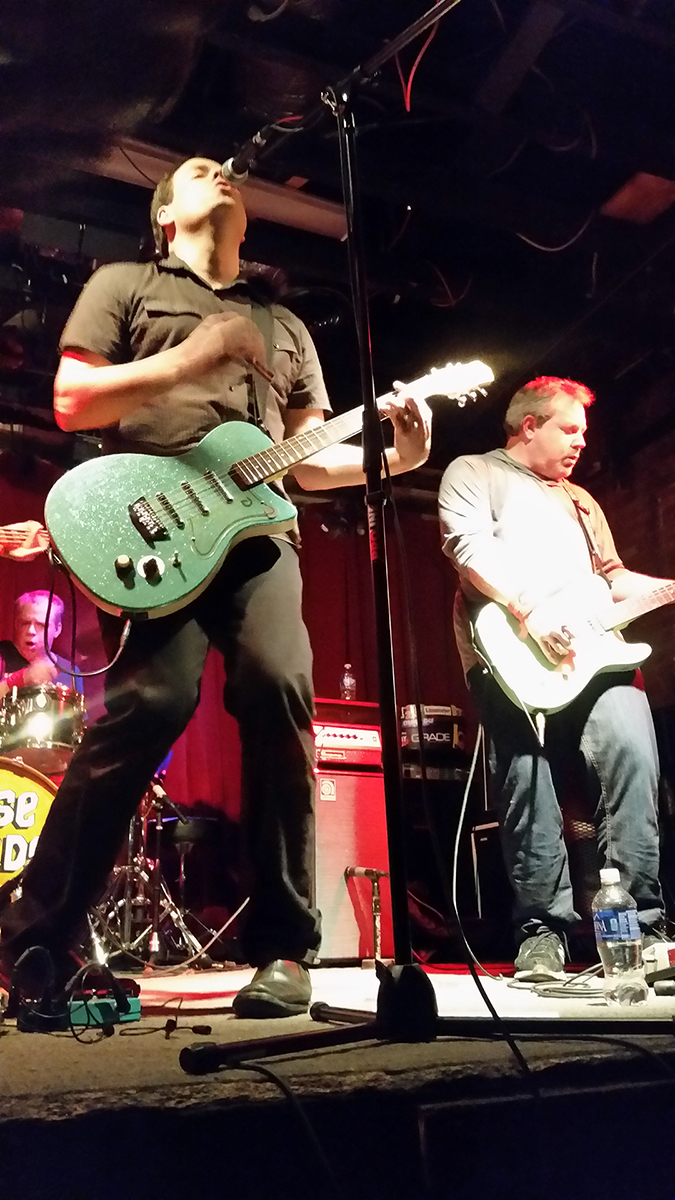 My mom used to play Herb Alpert and the Tijuana Brass, so I remember hearing that a lot circa what would’ve been 1967 or ’68.  Another big record in the house was by a guy named Walter Wanderley.  (In retrospect, it sounded like Felt.) I think there was a parrot on the cover.

I saw Spyro Gyra once.

Well, it’s 25-plus years ago, but I played in an English band called St. Christopher that did some touring. I liked it — the drinking, the walking around, the talking in strange voices (ideally all at once.)  On the negative side, we were sometimes with a guy (not in the band) who would antagonize people. Because of him we were chased through the streets of a little town outside Dresden, Germany by a group of eight or nine 30-and-40-something-year-old men.  I’m not even sure what he did that earned their umbrage (although I do remember him gesticulating rudely to them from the end of the street).  That was right before they started running toward us, en masse. The band scattered.

For my part, I took off down a side street, entered a charity shop, and secured myself inside a circular rack of jumbled clothes. Two old ladies who worked in the shop looked at me (their only customer) pensively but, it seemed, without judgment as I hid amidst a swarm of used bathrobes, children’s snowsuits, and strangely patterned nylon shirts.  Was I a disturbed (but harmless) man who had broken free of his caregiver?  A foreigner unfamiliar with traditional methods of browsing and goods inspection?  An unskilled but choosy shoplifter?

Whatever the case, they didn’t give me up. I was free to cower in their clothes rack if that was what I wished to do.  In due time, I emerged, sheepish but oddly formal, as if shoppers routinely climb inside display racks and stay there for a while.  Sensing the angry mob had dispersed, I bid my hosts a cheery “Danke schoen!” and set off.

In the early 80s it was Record & Tape Traders and Chick’s Legendary Records in Towson and Mount Washington (suburbs of Baltimore) respectively.  In the mid 80s it was a place in Richmond, Va. called Plan 9 (which thankfully is still going.)  In the late 80s/early 90s it was the Notting Hill Record & Tape Exchange in London. They had a very cool business model — they marked everything down 50 pence every week until it sold.  I worked there for a while.  Two of the other employees were in the Woodentops, which I thought was amazing.  They just took it for granted, though.   Nowadays, I don’t know, I respect any record store that exists!  I guess I’ll say Plan 9 for old time’s sake.

5. What is your favorite song or album of all-time? Why?

Man, that is a tough one.  I’d be lying if I didn’t say I think High Land, Hard Rain by Aztec Camera is the most beautiful album ever.  And Positive Touch by the Undertones is a magical sonic elixir without parallel.  As far as single songs, the MC5’s live version of “Empty Heart” is a cathartic dose of wonder and affirmation.

I don’t know.  What good would it do?

Lead-In Image Courtesy of Dot Dash and The Beautiful Music