While some of us can name World War II flying aces, many don’t know the story of Squadron Leader Karun Krishna “Jumbo” Majumdar — the “Father of the Indian Air Force” — whose medals will be up for auction in London on November 26th.

Born in Calcutta on September 6, 1913, Majumdar was educated at St. Paul’s School, Darjeeling, before sailing from Bombay aboard the S.S. Rawalpindi for England, to train at R.A.F. Cranwell from February, 1932. He passed in December 1933, sixth out of the list of 30, was gazetted as a Pilot Officer and posted to Old Sarum. After finishing his course there, he was posted briefly to No. 2 Squadron R.A.F. before returning to India to join the recently-formed No. 1 Squadron, Indian Air Force, in November 1934.

In May 1935, Majumdar was in Quetta, when an earthquake struck and, with other members of the Squadron, he took part in the rescue work. On July 9, 1935, he received his commission as Flying Officer, subsequently becoming Flight Commander ‘C’ Flight, No. 1 Squadron, which moved to Fort Miransah, Waziristan (where he remained until September 1939, when the policing of the Frontier was handed over to the I.A.F. Volunteer Reserves).

Promoted to Squadron Leader, Majumdar took command of No. 1 Squadron in June, 1941.

In the following January, equipped with Lysanders, the Squadron arrived in Burma and was based at Tuogoo Airfield from February 1, 1942. It was to be an eventful month.

On the very next day the airfield was attacked by the Japanese and most of the existing Allied installations and aircraft were destroyed with only the I.A.F.’s Lysanders being left.

Majumdar immediately planned a retaliatory raid and on the following day, February 3, he settled himself into a Lysander armed with two 250 lb. bombs attached to improvised racks.

Asking one of the boys to give the “fan a turn”, he received the retort: “Where are you going?” to which he replied: “Just for a little outing – I’ll be back soon!”

The use of Lysanders in offensive bombing missions had previously been unheard-of but, with an escort of two N.Z.A.F. Buffalos, Majumdar flew at treetop level in the direction of the Japanese base at Mae-Huangsu. Managing to achieve complete surprise, he dropped his bombs on an aircraft hangar, destroying both it and the aircraft it contained.

On the following day he led the entire squadron on a further bombing mission when they succeeded in destroying several buildings, wireless installations and ground aircraft.

On the next day No. 1 Squadron was called to Mingaladon, just outside Rangoon, and joining with 28 Squadron, they carried out a raid on Moulmein Dockyards under Majumdar’s leadership.

Direct hits were scored on the railway station and various dockyard buildings.

By the end of the month the situation in Burma had deteriorated to the extent that the R.A.F. and No. 1 Squadron were ordered back to India, with the exception of a few I.A.F. pilots, including Majumdar who quickly became accustomed to frequent solo reconnaissance flights over Thailand.

During one such foray he spotted a new Japanese airstrip. He reported it to the Intelligence Officer who refused to believe him, so the I.O. was invited to take a ride in his Lysander. On pointing out the feature, the I.O. still refused to believe Majumdar, claiming the strip was not straight enough to land on. Immediately Majumdar pulled his aircraft over and performed a touch-and-go landing, thus finally convincing the I.O.

On another occasion Majumdar had to make a forced landing in the Shan jungle, and after four days alone, he was fortunately rescued by a group of Shan tribesmen. Finally, at the beginning of April, he was amongst the last Allied pilots to leave Burma when he managed to get out of Rangoon aboard a Flying Fortress on March 11.

During a frenetic and eventful three months No. 1 Squadron I.A.F. had lost just one pilot and one air gunner, and for his leadership of the Squadron during the Burma Campaign Majumdar was awarded the Distinguished Flying Cross – the first Indian Officer to be so decorated.

For the next two years Majumdar remained in India, employed in various staff and flying assignments. By this time a Wing Commander, he sought permission to take part in the European war, especially the anticipated operation which would become known as D-Day.

He arrived in England in mid-March 1944 and took up active flying duties at the beginning of June when he was attached to 268 Squadron in a reconnaissance role. His first operational flight took place (after two days’ cancellation due to bad weather) on the June 10, a reconnaissance over the River Seine, and included an attack on enemy ground targets.

By the end of his operational tour on September 20, he had flown 65 operational sorties in 100 days. Of particular significance were Majumdar’s reconnaissances of the heavily fortified Falaise Gap, photographs of which were vital for the progress of the Allies.

Majumdar immediately volunteered for this hazardous operation and his photographs were later used by Montgomery in the Battle of Falaise. For his work in North Western Europe he was awarded a bar to his D.F.C., thus becoming the only Indian Officer to receive a second.

Majumdar returned to India late in 1944. Early in the New Year, he was given the task of awakening the air-mindedness of the public, especially amongst college students, as recruitment to the I.A.F. had fallen dramatically and it was felt that a high-profile figure of his stature could boost the prospects for India’s future air power.

He was asked to lead air displays throughout India and the job also included talks, broadcasts and personal From the start the ‘Flying Circus’ seemed doomed, with three pilots losing their lives during training at Kohat. Majumdar’s display flight arrived at Lyallpur on February 15, 1945.

Two days later, Majumdar decided to perform an aeronautical display in a Hurricane, even though he knew the particular aircraft he was using had a history of mechanical problems.

Roaring into the air before a large audience, he executed some high-level turns and then produced a manoeuvre involving a dive, during which one of the undercarriage legs became unlocked from the wheel-well and deployed down.

The Hurricane’s stability was upset and it stalled and crashed, killing Majumdar instantaneously.

Jumbo Majumdar’s seeming disregard for his own safety on solo bombing raids and leading others against what appeared to be insurmountable odds made him a legendary figure both in the Royal Air Force and among his own countrymen.

It is generally agreed that had he lived, his example and vision for Indian airpower would have seen him rise to the highest level in the post-Independence Indian Air Force. 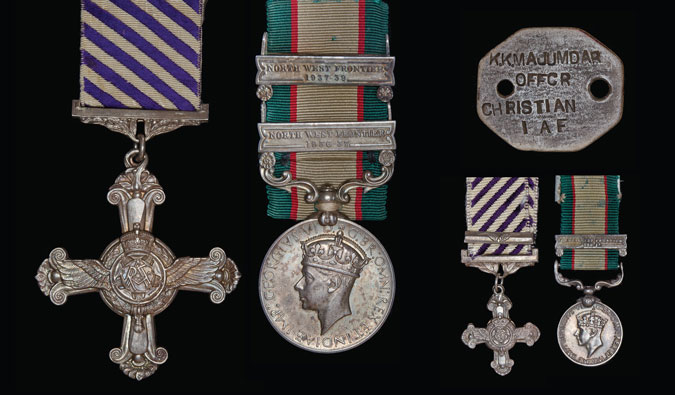 The medals and accompanying archive can be seen during the public view for the sale, which is at Morton & Eden’s offices at 45 Maddox Street, London, W1S 2PE on Friday November 21, Monday, November 24, and Tuesday, November 25, from 10am – 4.30pm or by previous arrangement.

For further information, please contact the auctioneers, telephone 0207 493 5344 or info@mortonandeden.com.

Morton & Eden are specialist auctioneers of Collectors’ Coins of all periods and types, War Medals, Orders and Decorations, Historical Medals and Banknotes. The company was founded in 2001 by James Morton and Tom Eden, both former Directors of the Coins and Medals Department at Sotheby’s. Sales are held on Sotheby’s premises in London, while online bidding is provided via www.the-saleroom.com.