Thanks to social media, I saw that Lorie Lewis was working on an art project to help combat gun violence. (Unsurprisingly, if you know Lorie, we met some years ago volunteering for an arts organization.) She was kind enough to meet me at a cafe to tell me about what she’s been up to recently with Wings4Peace. Here’s what we talked about.

Our Q&A with Lorie Lewis

So, please tell me about Wings4Peace.  What’s your “elevator pitch”?

This is a national art project to end gun violence and inspire peace. It’s an on-going movement meant to provoke meaningful  conversation around gun violence, bring people together, and ensure that everyone is seen and heard.  It has two main components: a public art piece that evolves over four months and an incorporated message about gun violence that is revealed one word at a time. The full message will be revealed on October 24th. You can learn all about it on our website, wings4peace.com

How did you have the initial idea to take this on?

I’ve been watching shooting after shooting, feeling sick to my stomach about it. Uvalde was my breaking point. After having all the emotions you can imagine, something just came to me to contact David Hogg, the activist who runs March for Our Lives. So I did, through twitter, and he answered. As someone who has loved the arts and worked in the arts field, I know the power of the arts. I told him that I wanted to help in some way through the arts and asked, “do you have a need?”  He said yes.

I was shocked that he answered me! But I got his message and sat down, and wrote a plan. I’ve always believed in the power of creative energy. I also believe that everyone deserves to be seen and heard. I know that art movements work and that throughout history, public art has both reflected and instigated change. By addressing the urgent crisis of gun violence through art, we have an opportunity for people to join hands across the nation to tell visual stories that will draw attention to the issue in a unique way. I’m advocating for the arts as a solution – to provoke conversation, to challenge people, to unify people, to heal, and to inspire people to act – all the while elevating the arts and artists.

I contacted my old boss and good friend, Paige Miglio at the Milford Arts Council (the MAC), and we brainstormed. She came up with the idea of wings. And I ran with it. I added the idea of an evolving message about gun violence to the project plus a long term plan for future initiatives. I sent it to David, he loved it, and he connected me to Gracie Lee Pekrul. Do you know her?

Yes, she is an artist and founder of Artists for Peace. She’s very active in the gun safety world. She does amazing work, and we had an hour-long conversation about how we would roll out the project together. We created our collaboration and put out a post on Facebook to seek interest. So many people wanted to get involved! Old friends–high school friends I had not seen for 40 years came forward and wanted to help! One of those friends connected us with Darcy Hicks, an artivist in Westport, the founder of DefenDemocracy. She was “all in” and she’s been incredibly active in the movement! An old friend, a graphic artist, said he’d help. Gracie knew people. Darcy knew people. The team barely knows each other, and most of us have never met in person. It’s just friends of friends of friends, but we’re working together beautifully. We launched on Sunday, with part one of the four-part series of projects.

How does that work?

The project is to create four sets of artistic renderings of wings, each with a different word over the course of four months on the Uvalde shooting anniversary dates of July 24, August 24, September 24, and October 24. A message will be revealed one word/one month at a time along with the art. The first word is “Peace.”  In August it will be “In America.” And three and four, I can’t tell you yet! Anyone can jump in any time and just catch up.

In July, we had people involved from 15 states!  As the project grows, we’d like to get people from all 50 states.

We are hoping that you will soon see some larger projects from different organizations like the gun safety organizations, well known artists, and other activist groups. The beauty is that anyone can participate with a project big or small. Of course, we are hoping for a lot of big projects because they will get the most attention.

It is very democratic. 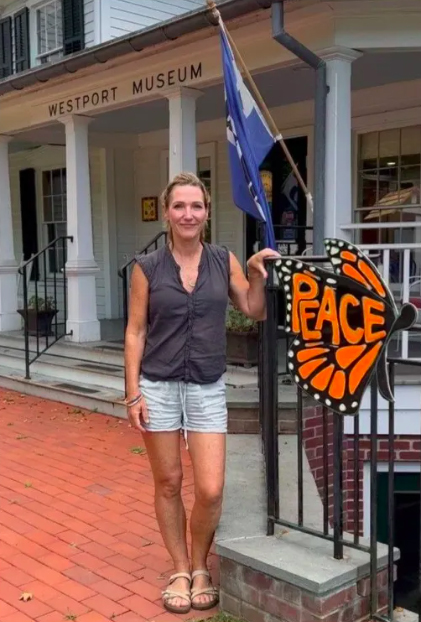 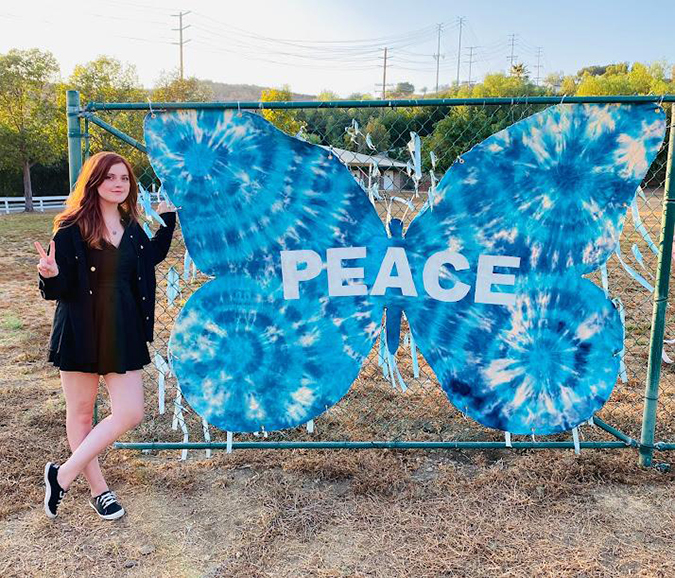 Gracie Lee Pekrul with her wings in CA 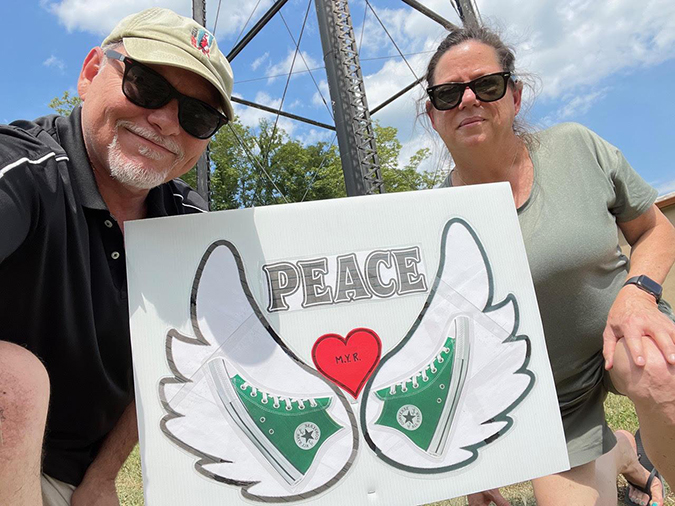 Wings on Highway 159 in Colinsville IL in honor of Uvalde student, Maite Rodriguez 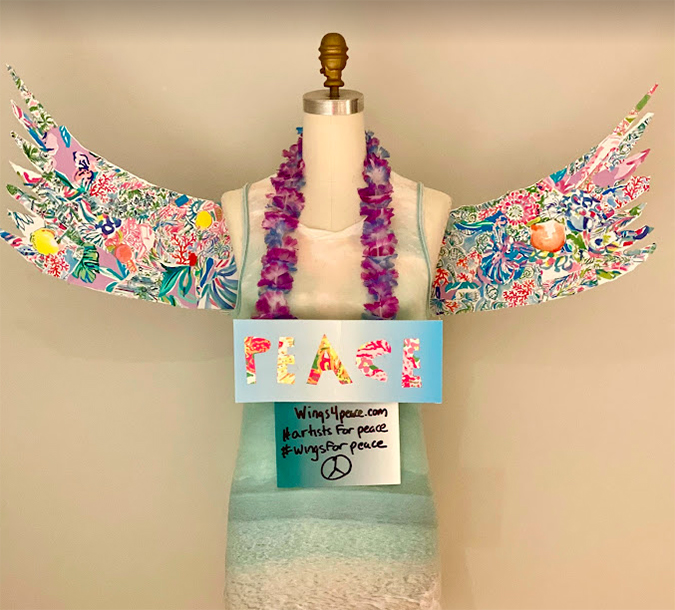 Fashion + Art at Splash of Pink in New Canaan

So, this is visual art–are you also considering music, dance, other forms of art?

Yes, in phase 2.  Are you familiar with Make Music Day?

Yes, I have seen musicians out and about and seen schedules for them in local places.

So, it’s a one day event that celebrates music in cities all over the world. Some municipalities and cities have organized this day, and other places it’s more do-it-yourself. The idea would be to use this initiative as a model and create a day in which everyone comes out for ALL the arts –including community art (like murals), music, dance, spoken word, etc. Organic festivals everywhere! The purpose would be to register voters at these locations and promote candidates supporting gun safety.

Are you planning on creating a 501(c)(3)?  Or are you just an informal collection of people doing this?

RIght now, we’re informal. But it might eventually be a non-profit, we’ll see. This project is unfolding the way art unfolds… and how wings unfold, actually. I love the symbolism of wings. They represent freedom, safety, and new directions. I want this project to have freedom to fly wherever it is meant to go, to evolve and be whatever it is meant to be. I feel like it’s been inspired from the minute I got that weird nudge to contact David Hogg. I’m just the vessel for this, and so far it’s been flowing, building energy, and taking on a life of its own.

I hope you get a lot of attention!  Are you getting some press, or some government interest?

A little bit so far, we were featured in Dan Woog’s 06880 blog and in Hamlet Hub last week. A mayor’s office in Massachusetts contacted our team member in Revere, and a local TV news station reached out. Community leaders and activists are reaching out too. We are hoping that our next installation on August 24th will bring a new layer of attention.

I’m just tired of crying and being angry. And donating money just isn’t enough. It’s time to do something.

Our country sure does need to take some action.

The gun safety world is small. I’m hoping that the arts might be a way to pull all of these great organizations together and collaborate. I totally believe in the power of collective energy – especially creative collective energy. Different groups and organizations are doing different things to eradicate gun violence, but this is something that everyone can do together as a way to draw attention to the crisis.

You seem to have really hit the ground running with this.

I kind of didn’t have a choice. I always listen when I get a whisper to do something, and as I said, it took on a life of its own, which has made it so easy. I also like to do projects at 100 miles per hour! 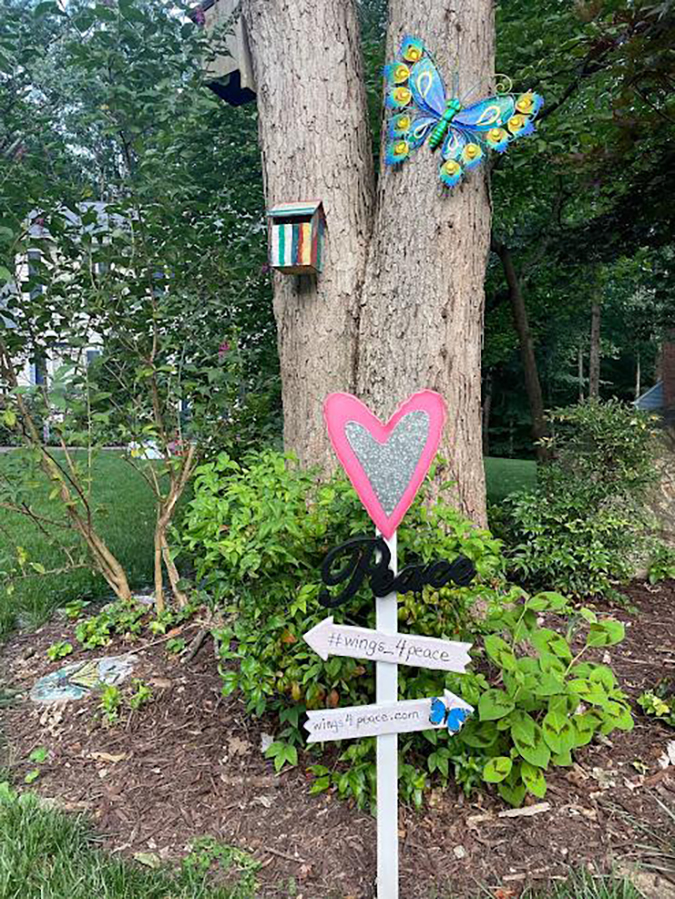 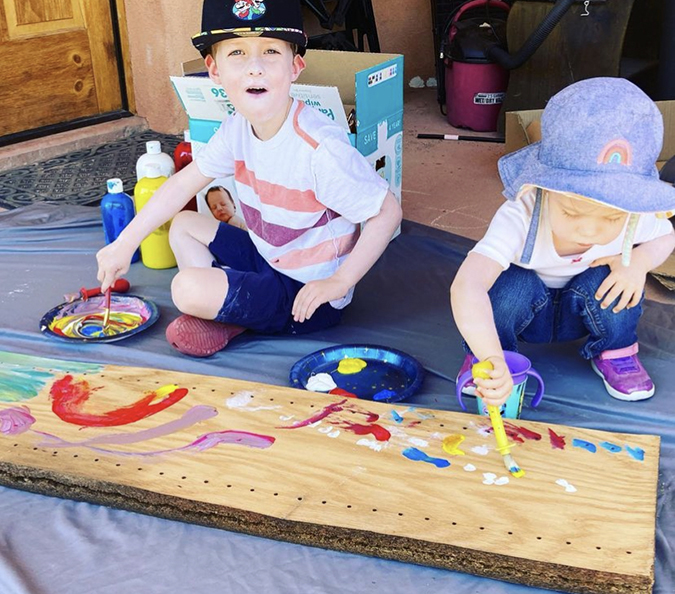 Kids in New Mexico working on theirs 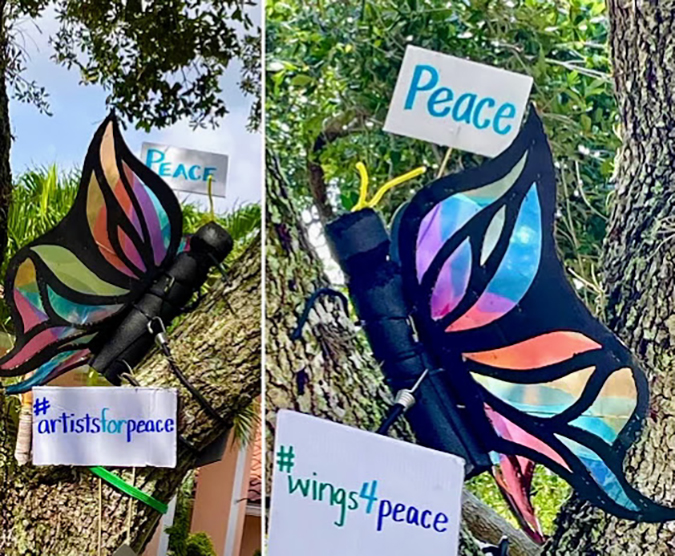 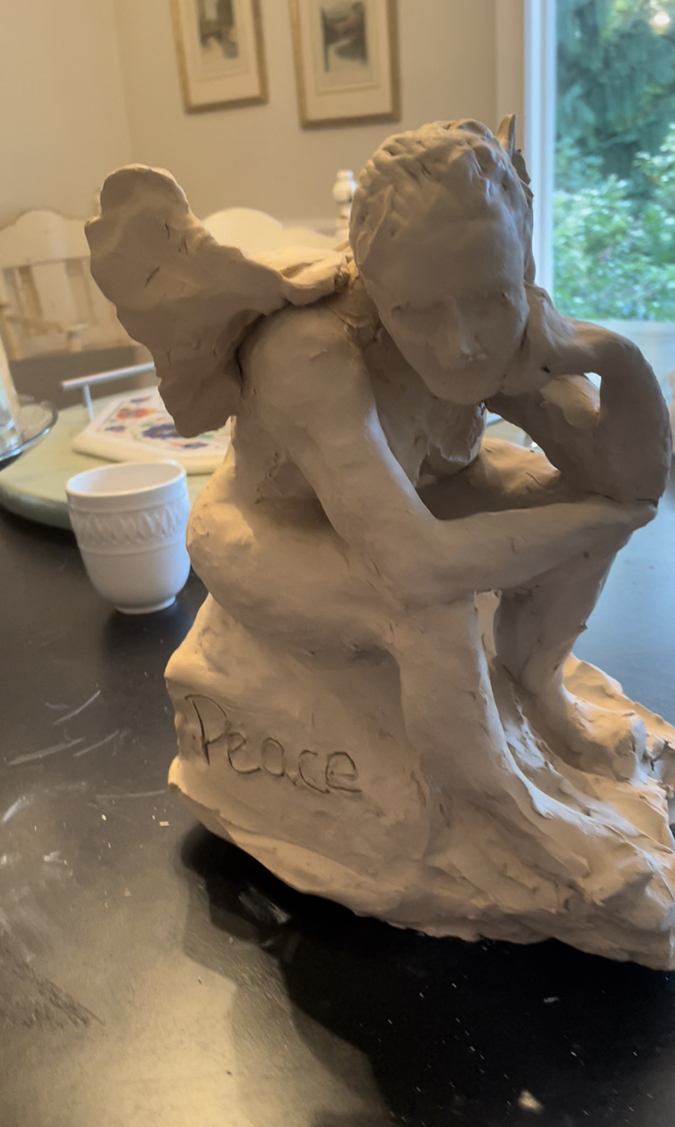 How can people get involved?

The best way is through our website wings4peace.com You can read about how to join the movement there. You can sign up for the mailing list to get instructions and sneak peeks of the upcoming messages. And follow us on instagram at @wings_4peace. We hope to double our participants and our states on August 24th. Anyone can jump in at any time. Just get out there and create! Put your wing art out in public where many eyes can see it. The more people who join in, the greater the impact.

And there’s a healing aspect to expressing yourself. We are a traumatized nation right now. We all need this. The arts reveal the common thread of our humanity. It’s how we can all see each other as one.

You’re reminding me, back in 2020, my older daughter was in a summer orchestra program, the Fairfield County Summer String Orchestra. It’s amazing that they managed to have it at all that year, but they did, with outdoor rehearsals and an outdoor concert at the end of the summer. And one of the conductors, Michael McNamara (they call him “Mr. Mac”) gave a speech about the program and how hard the pandemic had been. He said that science was going to get us out of this. And he added that it was going to be the arts that get us through this.

That’s exactly it!  It’s powerful. We need to do something with this power. Inspire action!

All too often, it seems, arts are treated as an afterthought.  Something nice but non-essential.  Just entertainment.

But the arts are so much more! Have you ever heard of Americans for the Arts’ Arts + Social Impact Explorer?

No, but it sounds intriguing.

It is. It shows something like 40 impact areas and different benefits of the arts–from community and economic development, to healing military vets with PTSD, to aging well, to prison rehab, to workforce development, innovation, on and on. Art is transformative and life-giving. It builds bridges and breaks down barriers. It helps us to understand each other and meet each other at the place of our common humanity. It challenges us, but ultimately can heal and unify us.

I don’t know where this is going. It could fizzle out. But it could grow. I have a feeling it’s going to grow.

I hope it grows.  Thank you so much for your time!

Thank you!  And if you know any artists, send them my way!

Laura LaVelle is an attorney and writer who lives in Connecticut, in a  100-year-old house, along with her husband, two daughters, and two cockatiels. 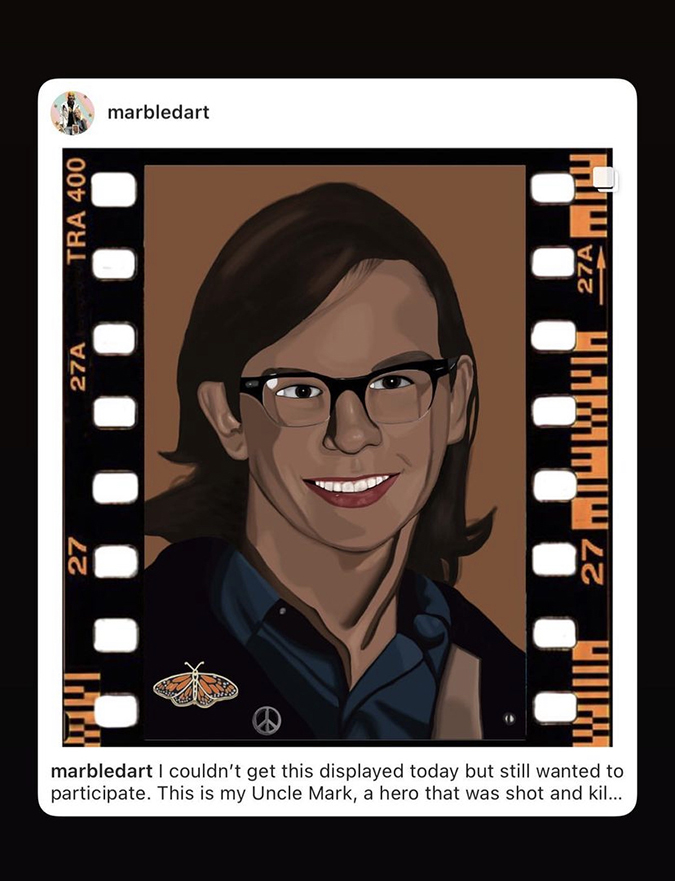 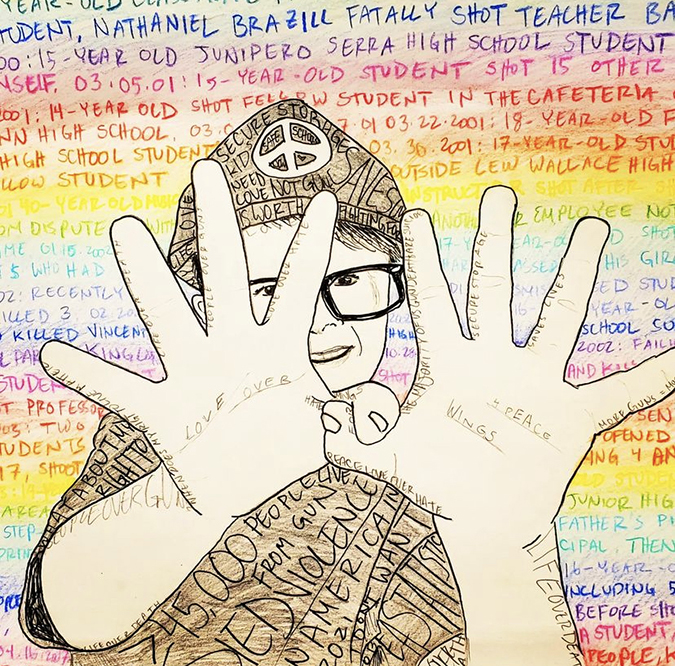 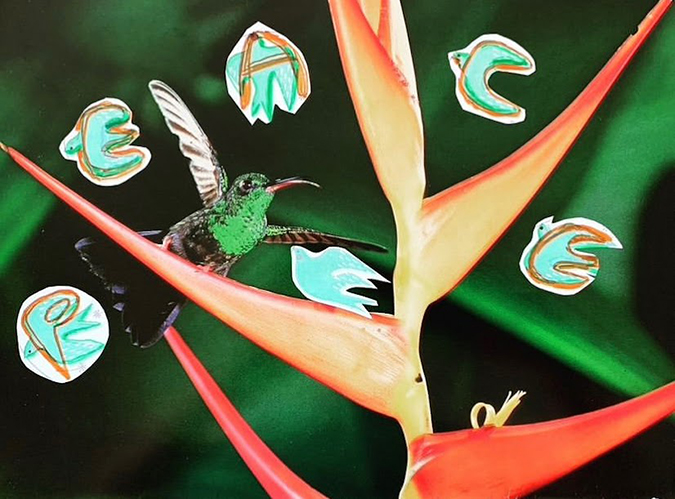 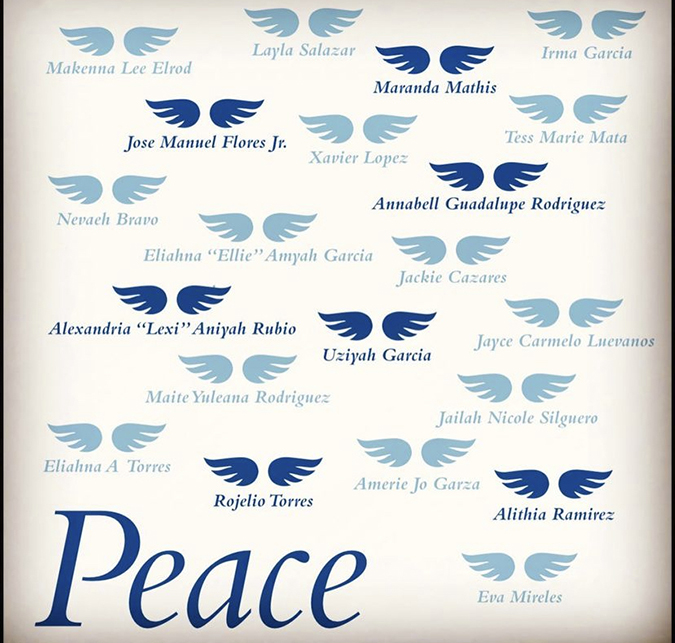 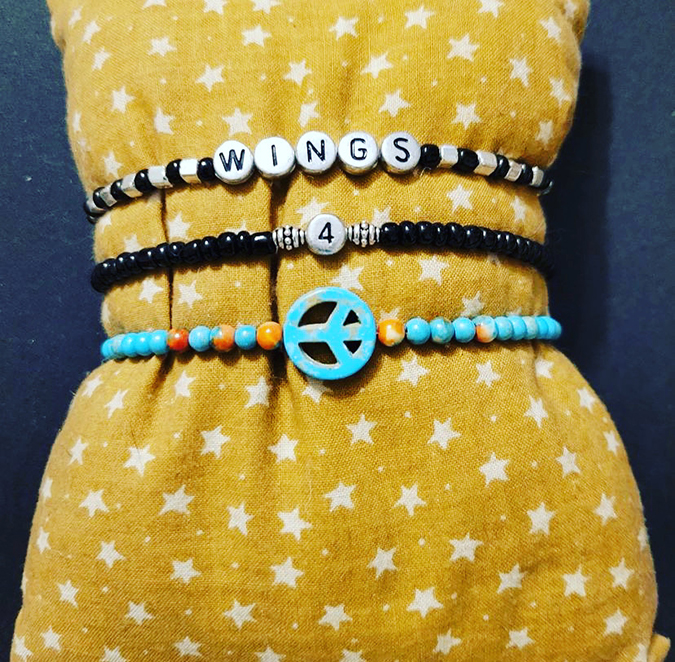 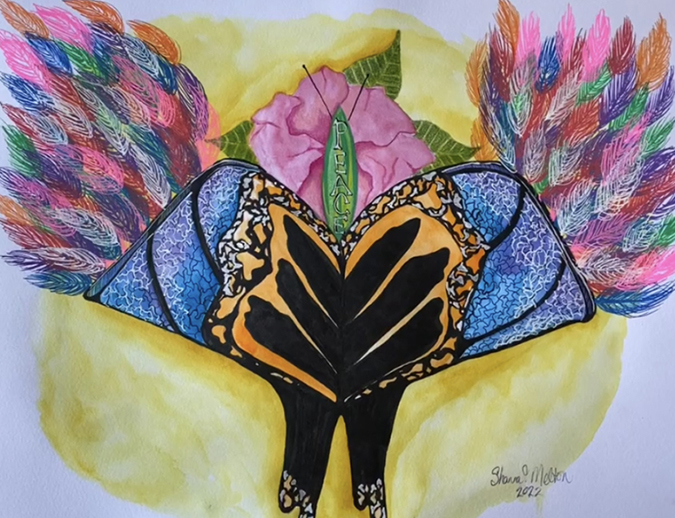