Aaron David Gleason likes jazz and country, is no stranger to musical theater (his mom is Joanna Gleason) and knows how to mischievously entertain (his granddad is Monte Hall).

And that’s what makes Aaron’s music so enjoyable — you can’t pin him down.

You think a song is about to continue (it doesn’t); you anticipate him going for a high note (he changes direction). You get the idea.

We don’t know what’s in store for Aaron — but we wouldn’t be surprised if his compositions were Broadway-bound.

His music is soothingly familiar, yet very original. It’s heartfelt. And it’s ready for big-time arrangement.

A lot of press on Aaron’s latest album Wry Observer will focus on his first song, the Americana-tinged “The Last To Die In Battle” — but we think it’s his Neil Diamond-like “Nueva York” that steals the show.

Take a listen, then get to know Aaron, who steps up to answer our Six Crucial Questions.

One of my earliest was my father waking me up and saying, “Get downstairs! Get downstairs!” I was in a panic.  What did I do?  “Come here, watch this…and listen,” he said, beaming.  It was Vladimir Horowitz playing classical piano.  My dad was mesmerized, maybe a tear in his eye.  He told me Horowitz had taken many many years off, was considered a recluse and retired, but here he was triumphantly returning.  I didn’t really know what to make of this, but obviously, it seared itself into my head–I’ll never forget it.

Anytime I wasn’t prepared for a rehearsal.  It’s a terrible feeling.

I like getting away from the computer, if not for a little bit more than usual.  I like living, seeing the world, being NOT a cog for a moment.  What do I dislike?  Eating fast food, ever. 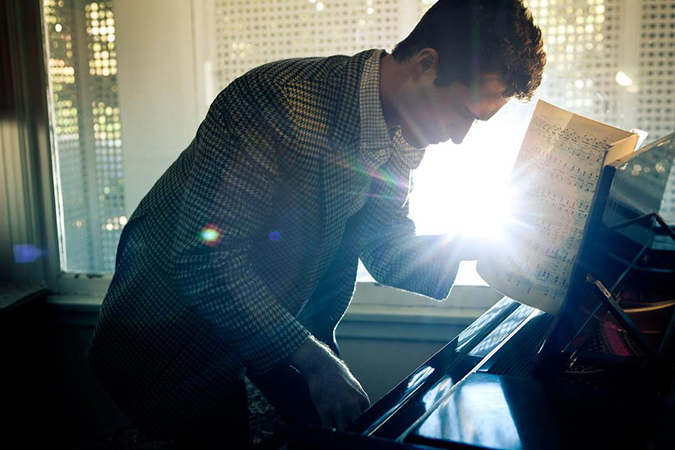 I don’t know what it’s called, but a small shop in Evanston, Illinois changed my life.  I walked in, and the man put on some vinyl…this song called “5 Years” came on–it kinda rocked my world.  I’m so glad it happened that way.

My own music doesn’t even come into the Top 10.  My favorite song is “Soul Love” by David Bowie.  My favorite album might be the Staple Singers Uncloudy Day–NOTHING is more REAL than that.  It has healed me in dark times, and it always teaches me.  I mean, it sounds…SOUNDS like the gateway to another dimension–it very well may be.

I guess I should probably call the number scrawled in lipstick on the mirror… right?

Images Courtesy of Aaron David Gleason and The Press House