This past Friday I was fortunate to be able to attend an art opening at the Morris-Jumel Mansion. It was a really lovely evening: spring was in the air, the bar was serving wine and something called Manhattan Moonshine (when asked what was specifically Manhattan-esque about it, the bartender told us it was only available in Manhattan), the guests were enjoying passed appetizers, and we had the opportunity to meet the English-born Nigerian artist, Yinka Shonibare, and view his exhibition, a specially commissioned work that relates directly to the Mansion and to its longest-standing resident, Madame Eliza Jumel.

I’ve written about the Mansion and the famous Madame Jumel before, and if the amazing history of the Mansion isn’t enough to tempt you to make a visit, perhaps this art exhibit just may do the trick… 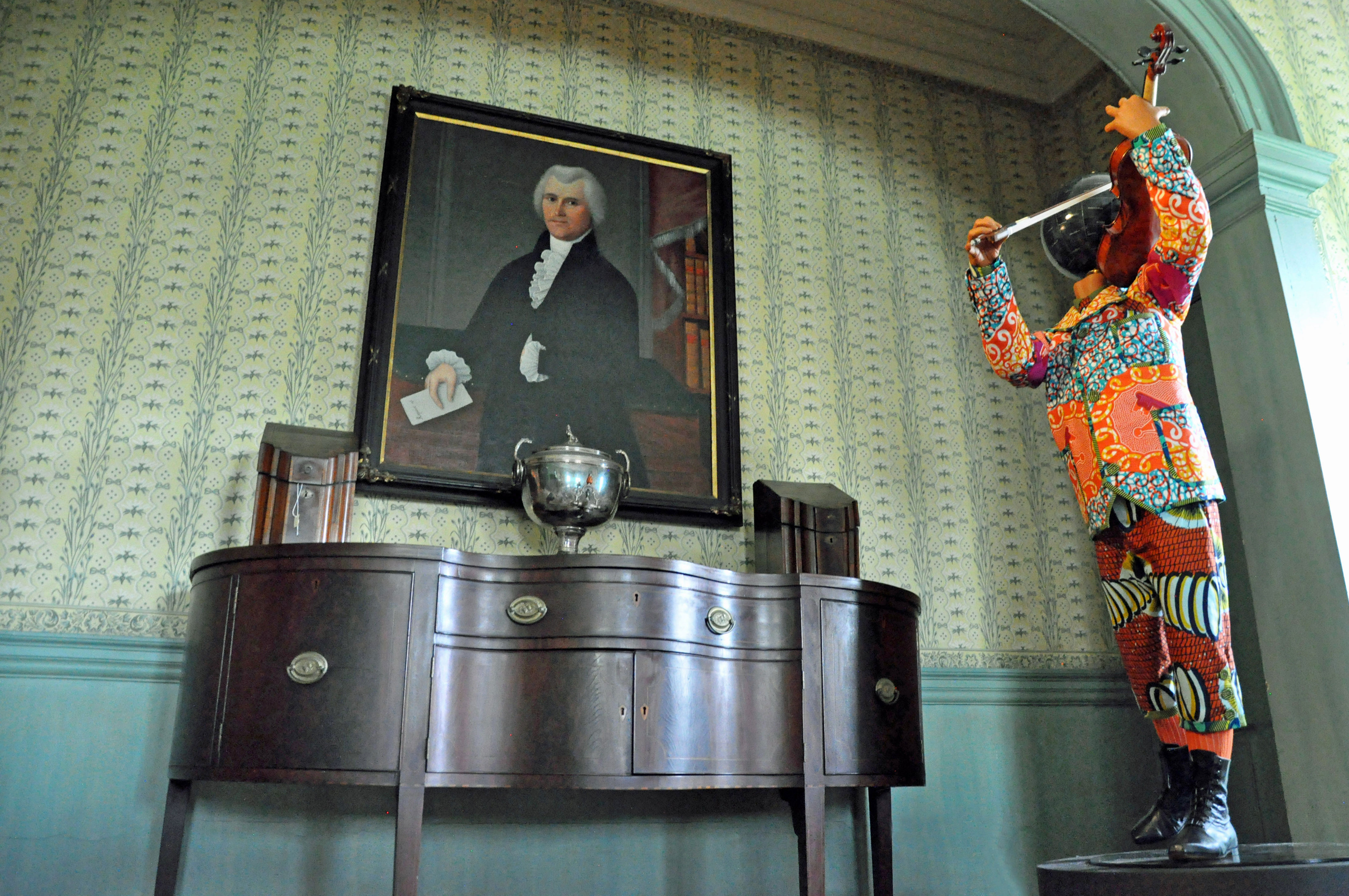 Shonibare’s work is very cerebral, and yet very accessible at the same time: he uses Dutch wax textiles to dress life-size mannequins in 18th and 19th century style clothing, creating sculptures which address colonialism, class, race, and gender. The colorful fabrics are commonly interpreted as African, but they were first manufactured by the Dutch, and inspired largely by Indonesian batiks, before they were marketed to West African countries.  Shonibare buys them himself in London. 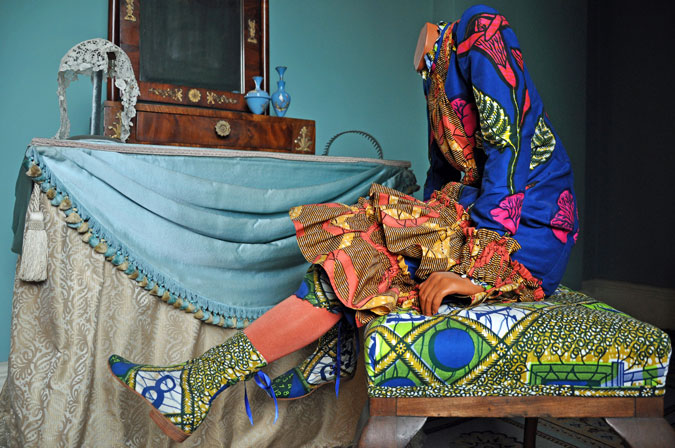 “[T]he fabrics are not really authentically African the way people think,” he says. “They prove to have a crossbred cultural background quite of their own. And it’s the fallacy of that signification that I like. It’s the way I view culture – it’s an artificial construct.”

As the Mansion’s Executive Director, Carol Ward, describes his work, “His pieces have special resonance with the history and mission of Morris-Jumel Mansion. Placing Shoninbare’s contemporary art in the Mansion’s period rooms links the past with the present and makes an 18th century home relevant to the 21st-century visitor.

“This concept of ‘contemporary meets colonial’ is one the Mansion has been exploring in recent years in order to better connect with its surrounding community—the diverse and dynamic neighborhood of Washington Heights.” 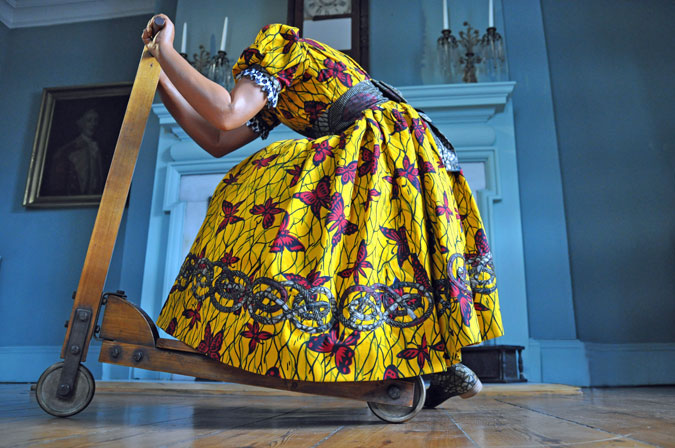 One of the pieces included here is The Ghost of Eliza Jumel (pictured below), in which Madame Jumel appears as a spectral figure through a Victorian illusion theater technique called “Pepper’s Ghost.” Fittingly spooky, it’s fun to catch a glimpse of her in the parlor. (Madame Jumel’s ghost is said to still haunt the Mansion, but Carol promises that she won’t eat anyone’s brains…) 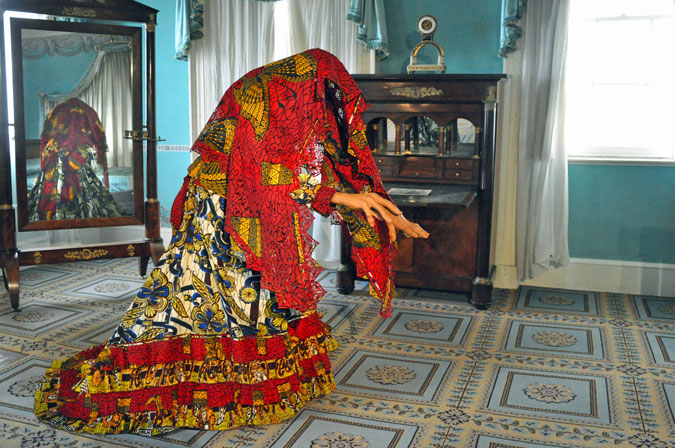 This, and the other sculptures, will all be on display through August 31st. They’re beautiful, and fascinating, and they invite the viewer to think about Enlightenment philosophies, slavery and the slave economy, social hierarchies, our conception of childhood, and multiculturalism in the past and in the present. 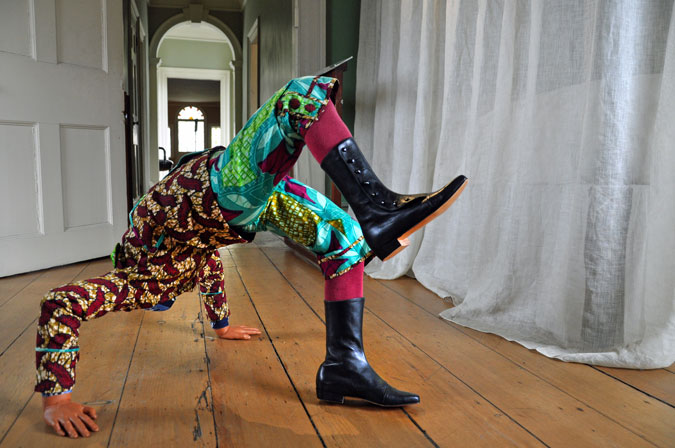 If you can’t get enough of Shonibare’s work, his exhibit Rage of the Ballet Gods is also open, but only through June 20th, at the James Cohan Gallery on West 26th Street.   And his website has links to some surprisingly affordable prints and china pieces available for purchase.  But do make a trip uptown to the Mansion: there will be themed events throughout the duration of the exhibit, and it’s the most ambitious show in the Mansion’s history.  (So far, anyway.  We’re all looking forward to seeing what the next 250 years will bring.) 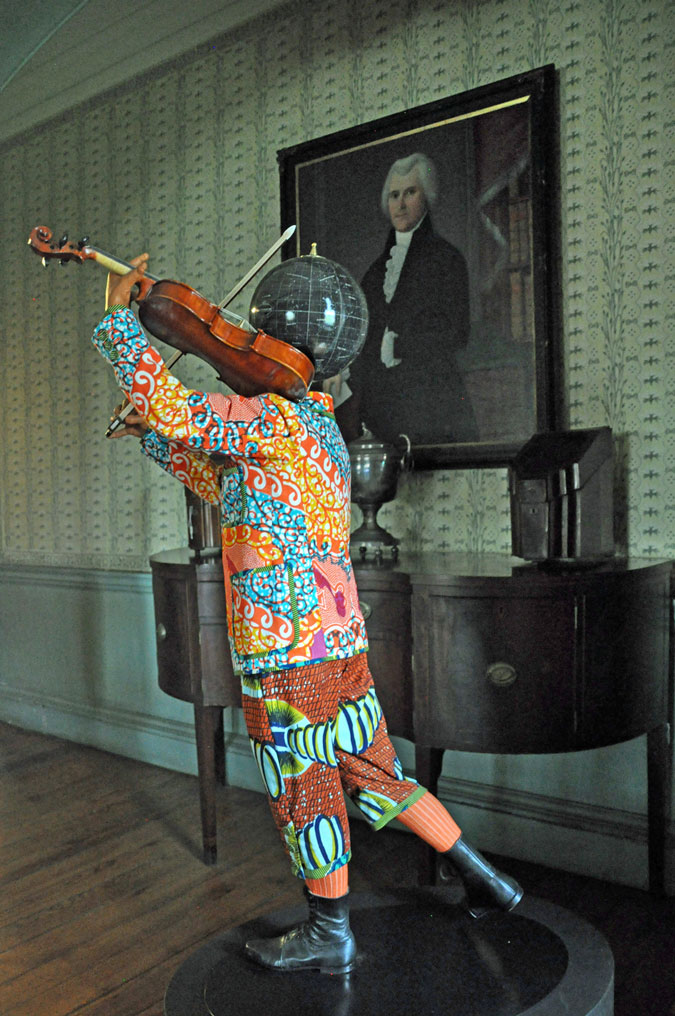