Forget for a moment that we are talking about records.

Music. Fun. Community. Getting together with your fellow humans for a sunny Saturday in April to support small, locally-owned businesses in the process… It sounds more and more like a good idea, doesn’t it?

Now, add awesome vinyl like this into the reverie. 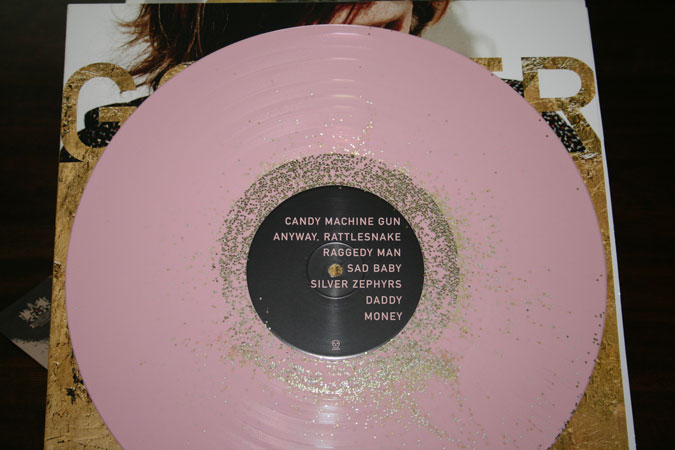 Saturday, April 18th, was Record Store Day (RSD). While this is largely an American thing, according to their site, there are celebrations on every continent, save for Antarctica (*looks disapprovingly southward*).

Luckily, the Twin Cities of Minneapolis and St. Paul, Minnesota, have a good many great music stores. It was impossible to get to them all on Saturday, but I did my best. 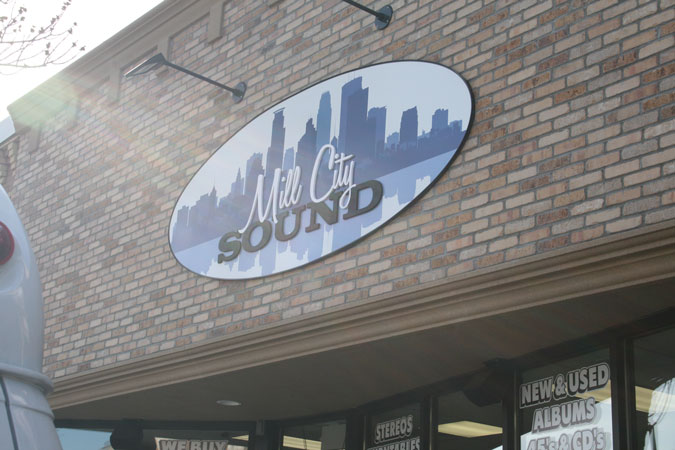 “I see that you opened at 8 a.m. today. How is it going?” I asked Mill City Sound manager Kathleen Haga over the phone.

Down I went to likely the newest record store in the Twin Cities (actually, Hopkins – a first ring suburb), and the place was jumping. Lee Valsvik from NBC affiliate KARE11 was on hand covering Record Store Day with a live feed from the store.

I shopped to my heart’s content while I waited for an opportunity to speak with owner, Rob Sheeley. I bought a special RSD exclusive double album of Slim Dunlap and Golder by Haley Bonar (see picture above).

Full disclosure: I live very near Mill City Sound, and have shopped there since I discovered it a few months back. A fair bit of my family’s 2014 Christmas shopping was done there. 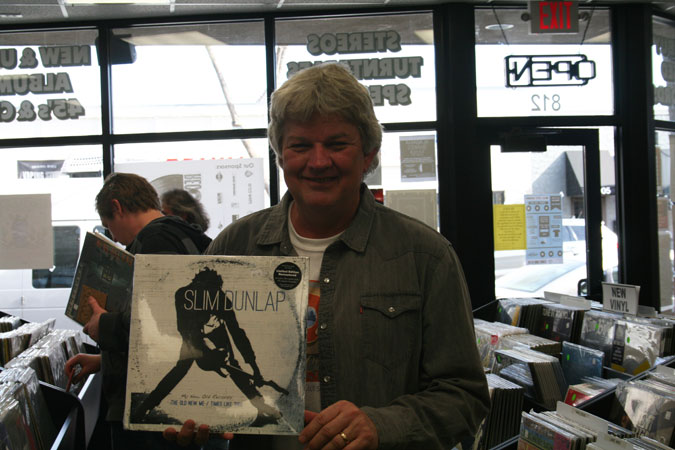 “I’m so glad you are here in Hopkins. When did you open?” I asked Rob.

“We opened eight months ago, and expanded last month… We had no hesitation whatsoever opening in Hopkins. It is real downtown; not some strip mall.”

We talked a bit more about doing what you love for a living, and the housing market near the store, before the television crew needed him again.

Did you catch that Mill City has been open less than a year, doubled their size last month, and had a television crew on hand for their first Record Store Day?

I left happy, both for my purchases, and for the incredible success Mill City Sound has been enjoying since they opened. 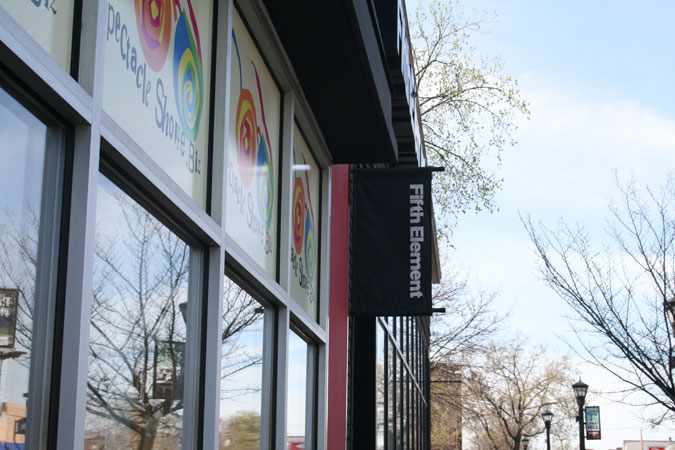 Fifth Element is a hip hop/rap record store that is also the retail out of Minneapolis powerhouse’s Rhymesayers Entertainment.

I picked up Black Star’s “Fix Up” b/w “You Already Knew” and Atmosphere’s “Lake Nokomis” maxi single (a 2014 RSD exclusive). 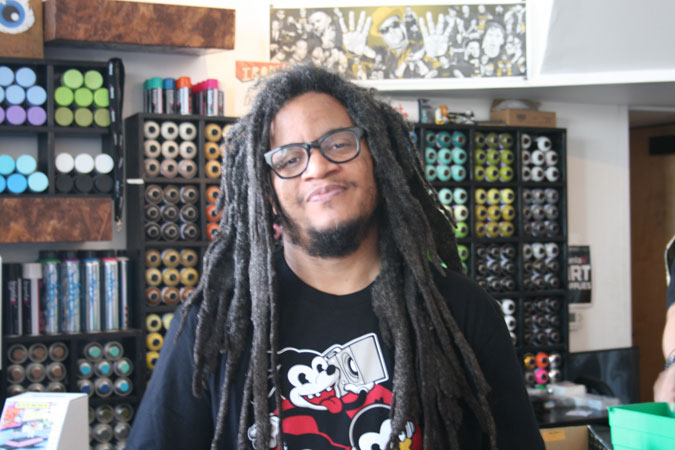 Store manager, Kevin Beacham, chatted with me about the excitement of Record Store Day, and how vinyl sales have trended since Fifth Element opened in 1999.

“There was a time maybe eight, nine years ago when there was that drop, but it’s been picking up. Vinyl’s doing great, tapes are coming back. People are getting interested in music again…”

“Exciting! Also, it is driving people back to small record stores. That’s how I bought records as a kid.”

Kids these days. It was a theme throughout my Saturday. Record Store Day brought out the young, the old, and everyone stuck in the middle. It bears mentioning that my four-year-old daughter, Lola, herself a Record Store Day veteran, was upset she couldn’t come with me this year. 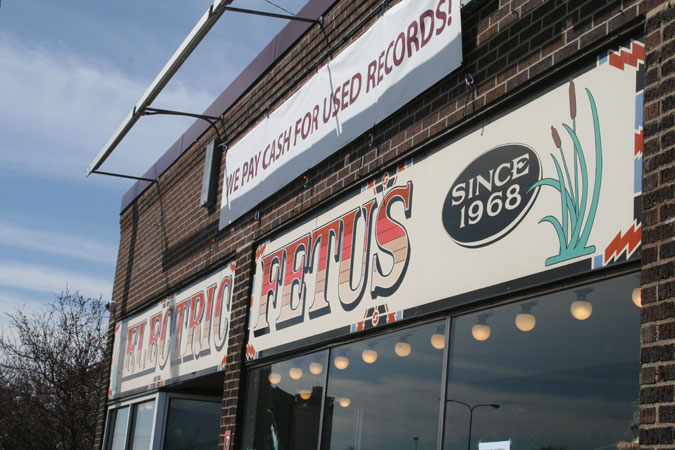 No Record Store Day outing in Minneapolis is complete without a stop at the grande dame, Electric Fetus. This storied institution has been around since 1968, and always has a big Record Store Day.

This last Saturday, it was very family friendly at the Fetus. 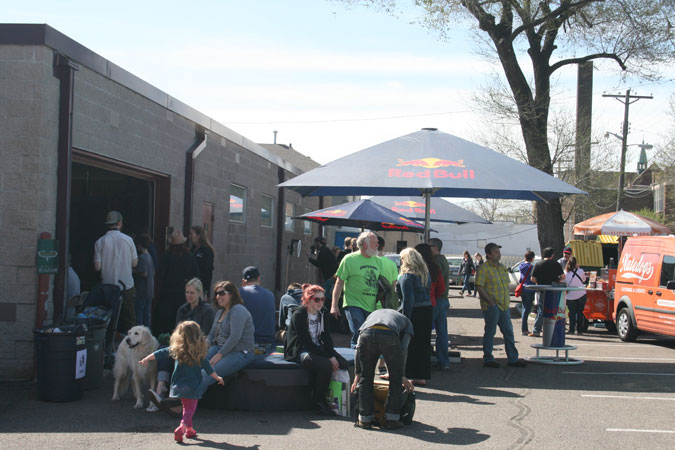 Behind the store there was an outdoor patio area complete with food trucks, musicians, and rock and roll arts and crafts! 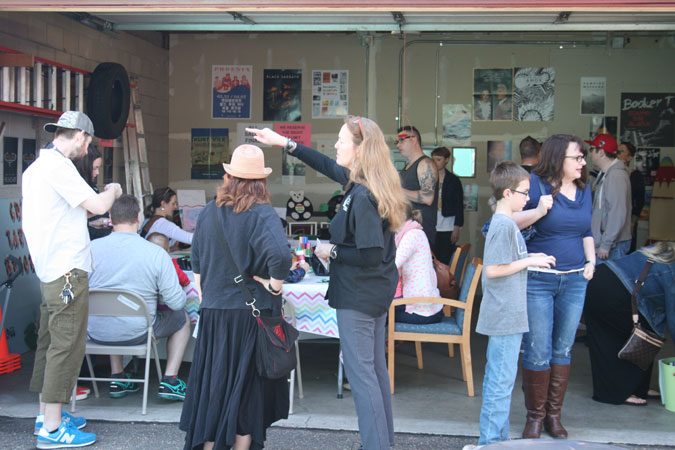 The back garage was open, and filled with activities for the kids, while their parents braved the heaving crowds inside the store. 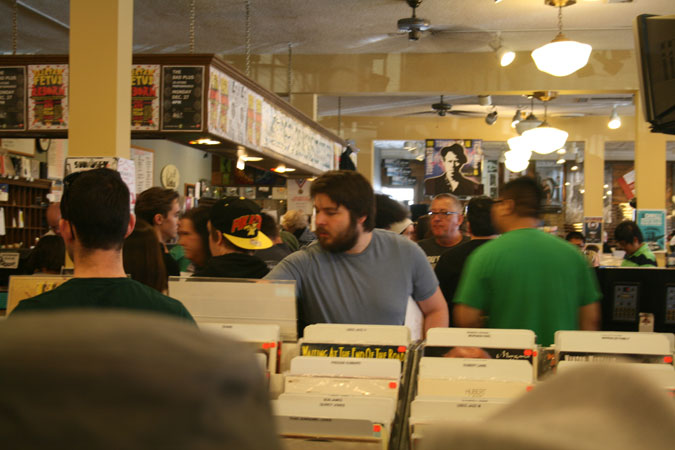 Store employee and four-year RSD veteran, Ed Draper, thought that this year was busier than ever.

“This is one of the days that definitely helps our business. Not just our business, but it gets the word out that vinyl is something that people are interested in.”

Speaking of those kids, Ed mentioned that he is seeing younger and younger patrons in the store.

“We’re definitely trying to make it more a family event this year; with arts and crafts out back so mom and pop can shop in here to their hearts’ content.”

Mid-Day Record Store Intermission: I took my kids to my parent’s house, so that my wife and I could have a date night after my vinyl shenanigans. 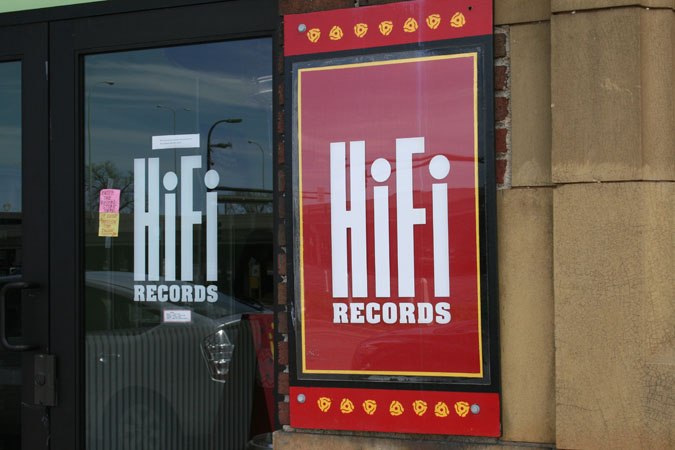 HiFi Hair and Records is strange little beast of a hair salon with the greatest juke box ever and a small attached record store. 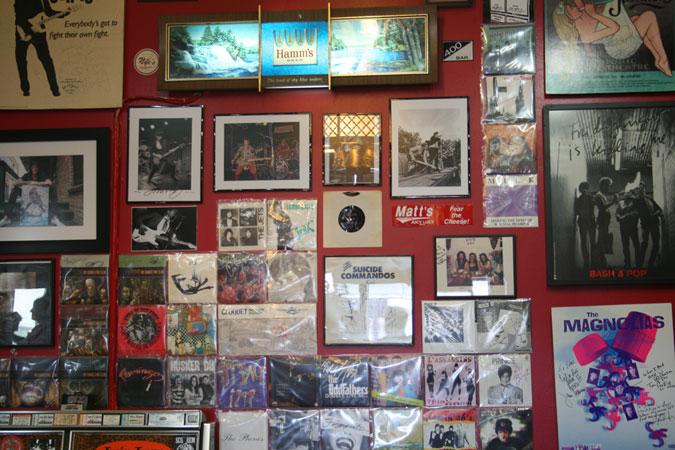 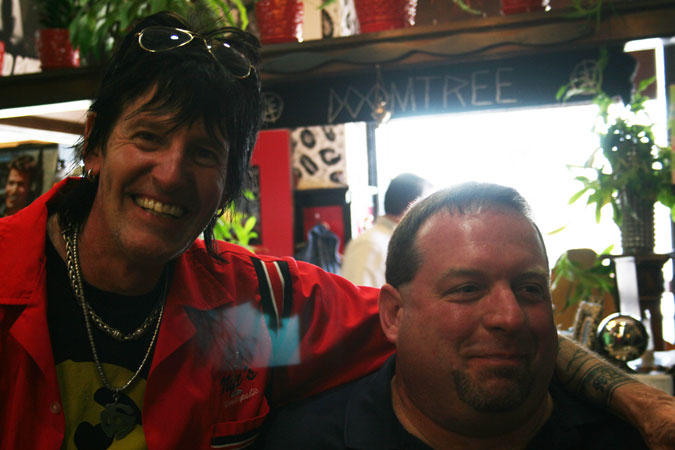 Owner Johnny Clifford (left, with customer) let me know that they opened the salon three years ago, and the record store about a year and a half ago.

“It seemed like the natural course of action,” he said.

I mentioned that the jukebox in the salon was amazing.

“As a rule, it is always filled with 20 percent or more local music,” Johnny said.

After hearing a rambling story from one of Johnny’s customers about local boxing, mobsters, and a friend who almost died, I met up with my friend, Nick Leet, singer/guitarist who was doing a HiFi in-store performance with his band “Pasadena ’68.”

Another disclosure: Nick Leet played at my wedding, along with friend and former bandmate (in High On Stress) Jim Soule. In hindsight, as a long-time fan and consumer of local music and record stores, this whole piece should have started with a disclosure. 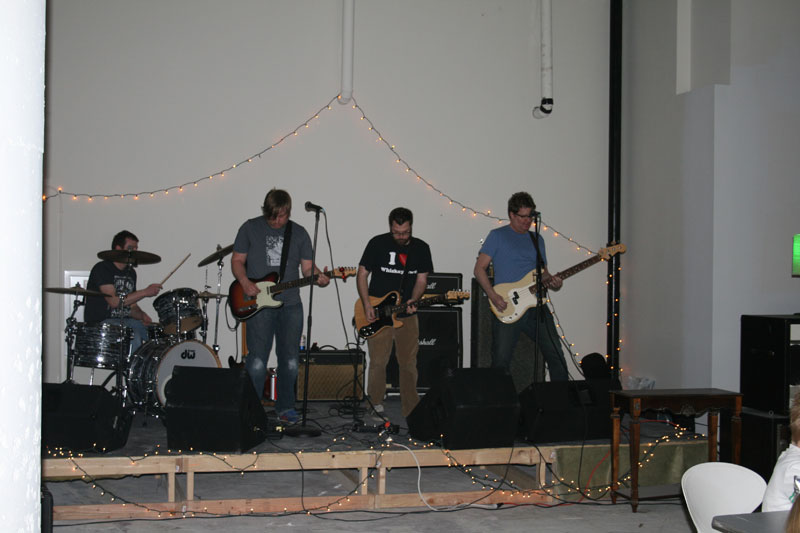 Pasadena ’68 rocked it, and even if the crowd wasn’t huge, it didn’t matter. There were kids there, families, oldsters, people like me, and, hell, it was Record Store Day. Hopefully, the glorious noise brought potential shoppers to HiFi from the nearby park and restaurants. That’s the point, right?

After Pasadena’s set, I hung around while Nick loaded guitars and baby seats into his SUV (he called it his SOB). Drummer/guitarist/singer, Mike Hjelden, rolled up and asked if we thought AC/DC ever had to do this, and we all agreed that they probably still are doing it for their grandkids. 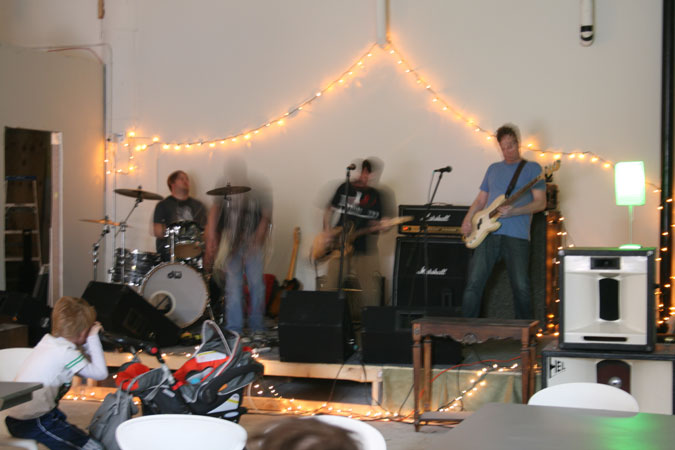 Is rock and roll a young person’s game? After seeing the various generations shopping for records and enjoying live music on Record Store Day 2015, I don’t know.

“He’s still got it, really. At times, I closed my eyes and listened. Who am I to tell him to quit? People still pay to have him show up.”

Long live rock and roll, viva la vinyl. It’s not for any one age group. It’s a family affair.

Post script: Nick Leet played a Slim Dunlap themed hootenanny at HiFi after Pasadena’s set. Read up on Slim’s medical situation at the link, but it seems I left too soon because Slim showed up. There was much applause, and not a dry eye in the house. He is unable to play or sing, due to his condition, but by all accounts it was a ray of light just to have him in the room. Record Store Day – Doing right by the artists as well as the stores.